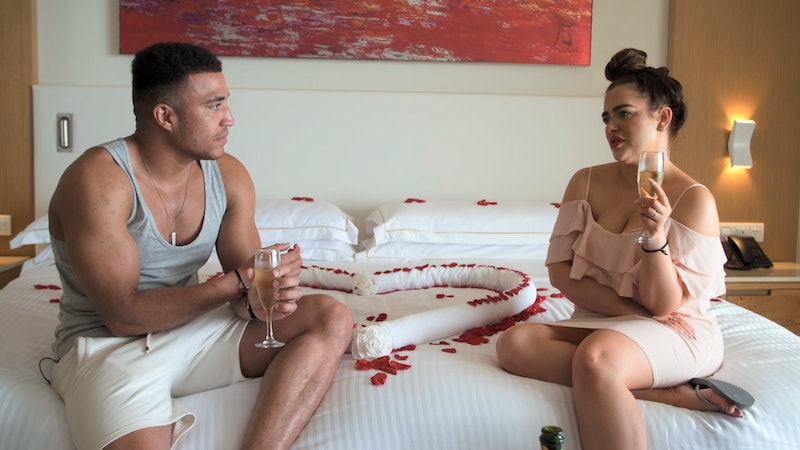 Fans of Married At First Sight UK will be familiar with its (quite literal) premise – a group of experts match a couple who meet for the first time just a few minutes before tying the knot. With a premise as outlandish as that, viewers may be wondering whether MAFS is the real deal.

According to Grazia, Channel 4’s position is that Married At First Sight is “an unscripted reality series”. Bustle has reached out to the broadcaster for further comment but has yet to hear back. Unlike its Australian counterpart, the UK contestants haven’t been vocal about the possibility of it being scripted.

In fact, one of the show’s stars, Emma Rathbone, revealed that she didn’t even realise the show would be televised. During an interview with This Morning in 2015, she explained that she would have liked to have been matched in private. “I didn’t know it would be televised,” Rathbone told hosts Philip Schofield and Amanda Holden. “Ideally, I would’ve liked this without the TV. I would’ve liked to have been matched. We’ve been doing this for 18 months.”

Rathbone was matched with James Ord-Hume on the show, but their relationship didn’t last. They split nearly nine months after the first meeting, according to Heart Radio. Thankfully for them, the actual weddings aren’t legally binding. Unlike the American version of the series, the UK follows the Australian format where the couple makes a promise to each other to try and make their partnership work. If they decide to part ways, there are no legal fees or divorce proceedings – which is lucky as so far, only one couple from the UK show has remained together.

Speaking of the Australian version, it seems that their format is the most likely to be scripted. According to season five’s Nasser Sultan, the stars are “fed lines” and the entire show is “scripted and staged,” he alleged to New Idea.

Season six’s Sam Ball had similar sentiments about the show. “[The producers] tell you what to say, they stand there and ask you questions until you give them the real answers,” he said on Instagram. He also suggested that the experts are fed their lines through earpieces. “You can hear what’s being said to them through an earpiece and they just regurgitate out to you, so they;’re just actors.”

As Good to Know notes, the production company behind the Australian version – Endermol Australia – has “never commented of contestant manipulation or whether the show is scripted.”

More like this
'The Traitors' Is Officially Being Turned Into A Board Game
By El Hunt
Turns Out George Clooney Is A Huge Fan Of This Classic British Game Show
By El Hunt
Spencer Matthews’ Impressive Net Worth Expands Far Beyond Chelsea
By Sam Ramsden
Barney Walsh Has Been Linked With This Famous Miss World Winner
By Sophie McEvoy
Get The Very Best Of Bustle/UK
Sign up for Bustle UK's twice-weekly newsletter, featuring the latest must-watch TV, moving personal stories, and expert advice on the hottest viral buys.