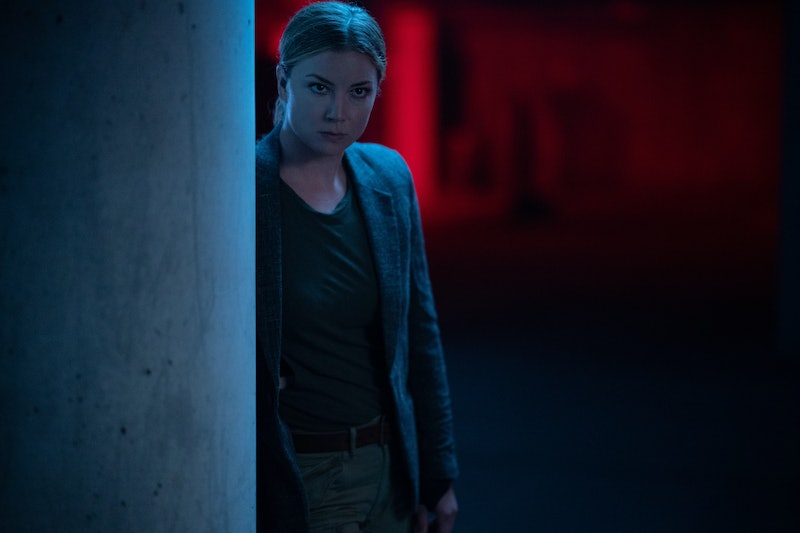 The final episode of Falcon and the Winter Soldier ends on an ominous note: after being pardoned by the government and welcomed back to her old job, Sharon Carter gets right back to business as the antagonistic Power Broker, telling an unidentified person on the phone to “start lining up” their buyers. Not only is she unwilling to give up the new life of crime she adopted in Madripoor, she now has access to unprecedented government intel and resources, and she’s going to take advantage of them.

It’s a shocking turn for Sharon, the great-niece of respected S.H.I.E.L.D. founder Peggy Carter and fierce ally to Steve Rogers whose selfless loyalty shaped the events of The Winter Soldier and Civil War. But series star Emily VanCamp, who has played Sharon since 2014, understands why her character is in this position: after helping Steve, Sam, and Bucky in Captain America: Civil War, she was effectively abandoned by the Avengers, and it still stings.

“I hesitate to call her the villain here, because we understand where this frustration and this anger comes from,” VanCamp says. “Did she need to take it this far? Absolutely not. [But] that is what works so well in making this turn for her, because in the films you do see her commitment to Cap, to the shield, to the cause, to the government. So it’s two extremes, really ... the more committed you are to something, when you’re scorned, when you’re hurt, when you’re betrayed, the more pain you have to feel. I think for her, [being abandoned] was an even bigger blow than probably most.”

Despite Sharon’s justifiable pain, she did appear to help Sam and Bucky on their quest to stop the Flag-Smashers. Granted, she was also helping herself in the process (Karli and her friends previously betrayed Sharon, and she’s been hunting them down ever since). But is there a part of her that still feels connected to the Avengers?

“Sharon’s tragedy [is] that when we see her now, that commitment, that love, has sort of dissipated,” VanCamp says. “Do I think that it still exists within her? Of course, but she’s quieted that part of her being and is now, from what we see, obviously fully committed to another cause ... I think she’s mostly out for her own personal gain, but I think there’s a part of her who’s kind of enjoying this, the good old days feel.”

Fans have some other theories, like that the Sharon Carter we see in the end credits scene is actually a Skrull in disguise, perfectly positioned to cause problems in the upcoming Secret Invasion series for Disney+. But VanCamp says she’s just as in the dark about Sharon’s next steps — and who she was talking to on the phone — as viewers. “The possibilities are endless… to me, too.”

For now, VanCamp is just excited to see Sharon strike out on her own. “So many people have come up and said they’re just so happy to finally see her in this light, to see her taking a little bit of control, and mostly to see her independent of that storyline with Steve [Rogers].”

In Falcon and the Winter Soldier’s making-of documentary on Disney+, executive producer Nate Moore echoed the sense of freedom in Sharon’s story. “Divorcing her from her relationship with Steve Rogers actually allowed us to explore a different side of the character,” he said. “Because now she doesn’t have to be, sort of, the white hat who is only good. Now we can explore what happened to her as a result of Civil War, and some of the more morally gray choices she’s had to make to survive in the universe.”

It’s unclear when or where we might see Sharon again, though the Power Broker would fit right into a possible second season of Falcon, the fourth Captain America film, or another upcoming Disney+ project. Until then, assume that VanCamp’s character is quietly causing lots of trouble.

More like this
An MCU Superhero Makes A Surprise Appearance In The New ‘She-Hulk’ Trailer
By Grace Wehniainen
'The Sandman’s Ending Is A Departure From Neil Gaiman’s Comic Book Series
By Kadin Burnett
'Bridgerton’s Jonathan Bailey & Simone Ashley Just Teased A First Look Of “Kanthony” In Season 3
By Grace Wehniainen, Alyssa Lapid and Sam Ramsden
The New ‘LOTR’ Prequel Series Trailer Teases The “Many Lies Of Middle-Earth”
By Alyssa Lapid and Jack Irvin
Get Even More From Bustle — Sign Up For The Newsletter