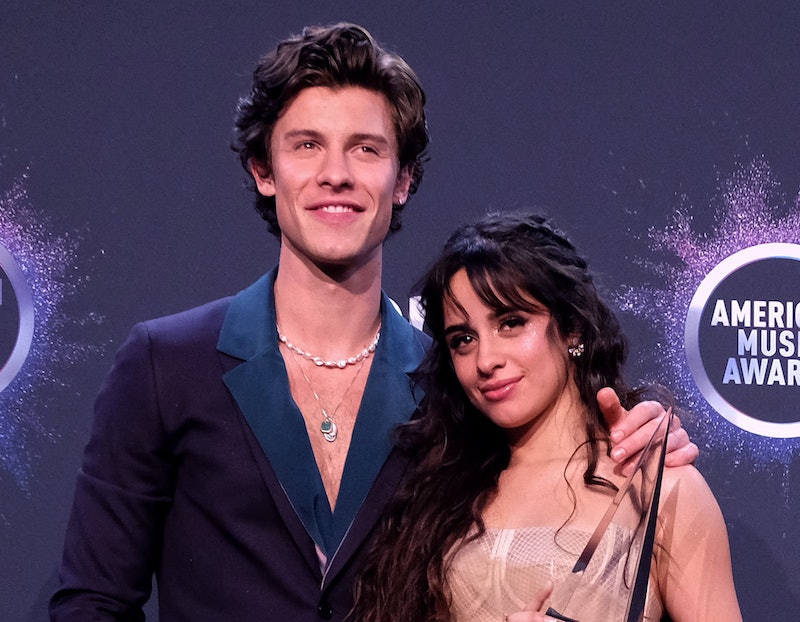 In an expansive conversation about his music evolution, Shawn Mendes revealed that Camila Cabello inspired “Wonder,” his newest single that debuted on Friday, Oct. 2. From his upcoming album of the same name, the single tells the musical narrative of a man who struggles to convey his emotions, with lyrics like, "I wonder if I'm being real, do I speak my truth or do I filter how I feel?" and "I wonder when I cry into my hands, I’m conditioned to feel like less of a man." In an interview with Radio.com on Friday, Mendes confirmed that his relationship with Cabello encouraged him to really be vulnerable, a process reflected in the new track.

"I thought that I was a pretty open, emotional guy until I started being in a relationship with someone that I really, truly love and realizing, 'Oh no, I really have this big ego, and I don’t want to show her that I’m hurting and I don’t want to show her that that offended me," Mendes said. "Like I want to be the man, and I want to be strong in this relationship." He added that this ended up hurting their relationship, and he soon learned that "real strength does lie inside of being emotional and being vulnerable."

Mendes also revealed that Wonder, which he worked on in the first half of 2020, out on Dec. 4, led him down a path of self reflection. “I think one thing that really kind of happened to me over the last six months is this real moment of reflecting and kind of looking at my own life,” Mendes said. “But also like being able to look at the world and not be so caught up in my career, my job, and my life.”

In September, Mendes said that Cabello was a “champion for this album," saying she always encouraged him to “keep going" in an interview with SiriusXM’s The Morning Mash Up “I remember back when I first started a lot of the concepts and they felt a little bit intimidating," the singer recalled. "She was like, 'Go, keep going, keep going.'" He called Cabello a “force of energy” that was “really helpful” in light of all the album pressures.

Cabello, for her part, celebrated the debut of “Wonder” on Instagram with a tribute to her boyfriend. “the world could use some magic, beauty, and Wonder always, but especially right now. @shawnmendes what a gorgeous gift to the world,” she wrote. “He’s crafted this album with every last bit of his soul, his spirit, and his essence with the purest of intentions. My love, I’m so proud of the person you are and I’m so excited for people to see and hear your heart.”

More like this
Meghan Trainor & Daryl Sabara Are Expecting Their Second Baby
By Jake Viswanath
Adam Levine & Behati Prinsloo Welcome Their Third Child Together
By Jake Viswanath
Hilary Duff's Husband Matthew Koma Has Her Name Tattooed On His Butt
By Jake Viswanath and Stephanie Downs
Austin Butler Recalls Lisa Marie Presley Showing Him Elvis’ Bedroom
By Jake Viswanath
Get Even More From Bustle — Sign Up For The Newsletter
From hair trends to relationship advice, our daily newsletter has everything you need to sound like a person who’s on TikTok, even if you aren’t.