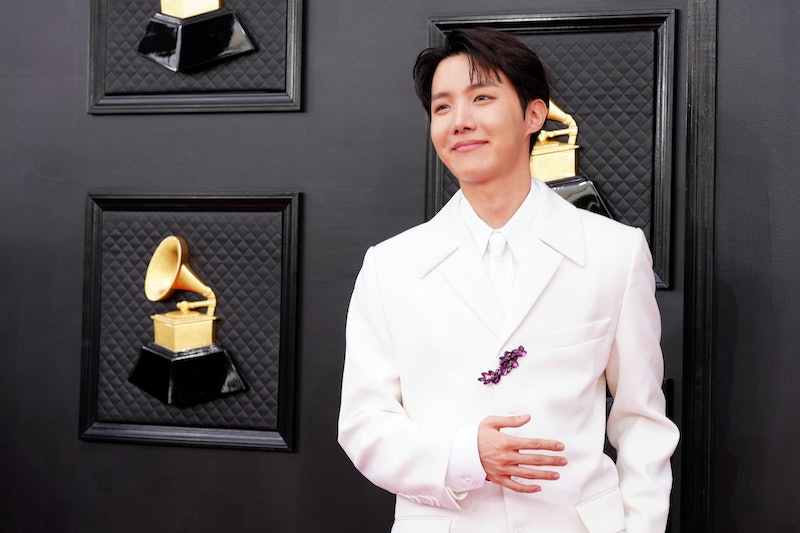 The recently announced BTS hiatus didn’t come as a welcome surprise to many ARMYS. Fortunately, the K-pop group offered a silver lining: solo projects. The band is “living apart for a while,” as Suga put it in their June 14 video, and it looks like they’re still keeping busy. Big Hit Music announced on Weverse on June 25 that J-Hope’s new album, Jack in the Box, is coming very, very soon.

The rapper, whose real name is Jung Ho-seok, isn’t totally new to working solo. He dropped his first solo mixtape, Hope World, in March 2018, and it became the highest-charting solo K-pop act on the Billboard 200. He’s not ready to go his own way for good, though. When BTS discussed their hiatus, J-Hope explained that the break (not breakup) would help them as a group.

“I think we should spend some time apart to learn how to be one again,” he said, per Variety. “I hope you don’t see this as a negative thing, and see it as a healthy plan. I think BTS will become stronger that way.”

With Jack in the Box, he’s also looking to show growth, according to the official announcement. Here’s everything to know about the album so far.

When Is Jack In The Box’s Release Date?

J-Hope isn’t making fans wait long for more music from a BTS member. Jack in the Box is due out on July 15. So far, he hasn’t revealed much about the album, but the short wait means all will be revealed soon enough — thankfully.

When Will The First Single Drop?

Coming even sooner is the first single. The title has yet to be announced, but the release date is July 1. Get excited.

What Can We Expect From J-Hope’s Solo Album?

Again, details are limited, but Big Hit’s Jack in the Box announcement did tease that the album aims to “break the mold,” per Deadline. The label also teased “diverse content to show J-Hope’s creative identity as an artist.”

Last year, J-Hope opened up to Bustle about some of what he’d been working on. “My personal goal for this year is to work and polish some of my personal stuff and maybe put out something,” he said. “I also want to become a person who can organize thoughts in a more mature way.” The rapper also shared that he wanted “to keep making honest, genuine music.”

What Else Is Coming Up For J-Hope And Jack In The Box?

J-Hope is scheduled to headline Lollapalooza’s main stage on July 31, which will provide the perfect opportunity for the rapper to perform his new music. Before he even announced Jack in the Box, he promised a “great show.”

“This is going to be my first performance at @lollapalooza,” he wrote on Instagram on June 7. “It’s a thrilling new challenge that I think will become a really memorable chapter in my musical history! I’m gonna give you guys a great show. Get ready to get crazyyyyyy!”

J-Hope will make history by becoming the first South Korean artist to headline a major U.S. music festival’s main stage, so between his Lollapalooza performance and his new album, fans have a lot to look forward to in the coming weeks.

More like this
BLACKPINK Just Announced New Music — Here’s Everything You Should Know
By Grace Wehniainen
Beyoncé's Renaissance Samples Everyone From Kelis To Right Said Fred
By Jake Viswanath
60 Empowering 'Renaissance' Lyrics That Make Perfect Instagram Captions
By Catharina Cheung
Now That 'Renaissance' Is Here, Let’s Revisit Beyoncé’s First Solo Album From 2003
By Grace Wehniainen
Get Even More From Bustle — Sign Up For The Newsletter