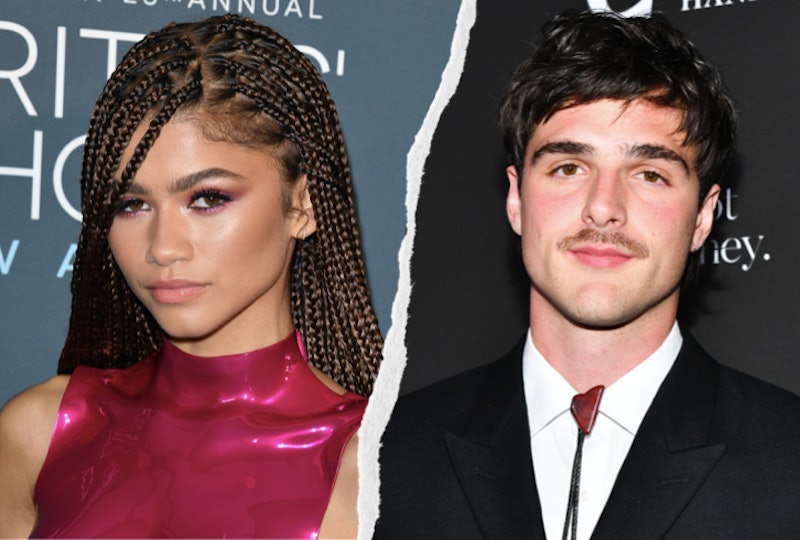 Rumored former couple Zendaya and Jacob Elordi were colleagues before their romance, and they'll be colleagues after (assuming Euphoria Season 2 is ever able to get back into production safely). Jacob Elordi congratulated Zendaya on her Emmy win with a message on Instagram, proving that the supposed exes are still on good terms.

Late on Monday, Sept. 21, Elordi took to his Instagram Story to celebrate his Euphoria co-star's historic win, posting a still of her in character as Rue Bennett. "Congratulations captain @zendaya Bravo," he wrote, complete with two heart emojis. On Sunday, Sept. 20, Zendaya became the youngest actor and just the second Black actor ever to take home the Emmy Award for Best Actress in a Drama Series, earning her love from fans and her Euphoria co-stars. Her onscreen little sister Storm Reid posted an Instagram video of her reaction to the actor's win, showing her screaming and jumping as Zendaya's name was announced. "Congratulations, I love you!," she shouted at the camera. Hunter Schafer also posted a video of her screaming in reaction to the big moment on her Instagram Story, while Sydney Sweeney simply tweeted her emotions, writing, "THAT'S RIGHT Z!!!!"

Elordi and Zendaya were romantically linked back in August 2019, two months after the premiere of Euphoria, when they were spotted vacationing in Greece together. The duo was later seen together multiple times in New York and Los Angeles throughout the beginning of 2020, shortly before quarantine measures were put in place nationwide and production on Euphoria Season 2 was shut down. Neither one of them ever commented on the relationship rumors.

Just before the Emmys, however, Elordi was spotted with model Kaia Gerber, and the two seem to be getting closer. They are reportedly vacationing together in Los Cabos, Mexico, with Gerber's famous parents Cindy Crawford and Rande Gerber. Previously, the rumored couple were seen hanging out together multiple times in New York and Los Angeles, with a source telling Entertainment Tonight that they seem super happy. "Things are really great between them," the source said. "They've been spending a lot of time together."

More like this
5 Wild Theories About Miley Cyrus’ “Flowers” Music Video
By Jake Viswanath
Daryl McCormack Has A Very Special Lady In His Life
By El Hunt
Paris Hilton & Carter Reum’s Relationship Timeline Includes A Surprise Baby Boy
By Bustle Editors
Keke Palmer Shares The Sex Of Her & Darius Jackson's Baby
By Jake Viswanath
Get Even More From Bustle — Sign Up For The Newsletter
From hair trends to relationship advice, our daily newsletter has everything you need to sound like a person who’s on TikTok, even if you aren’t.