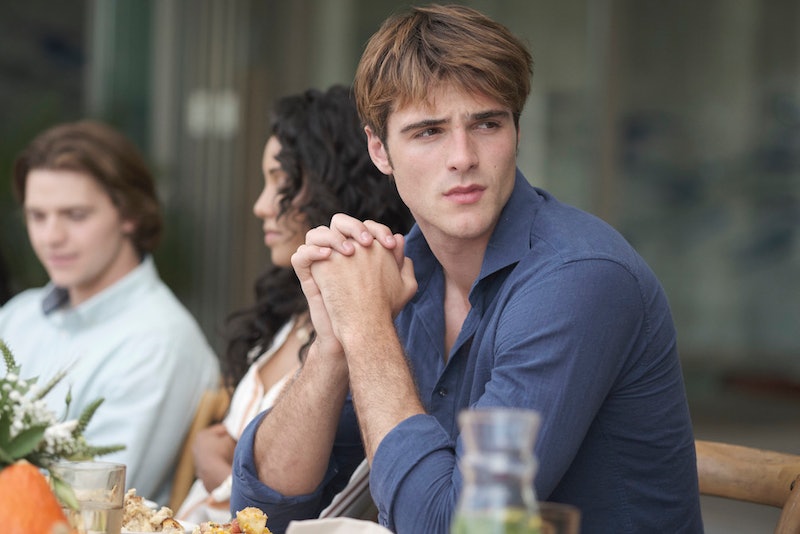 Citing his perpetual “resting miserable face,” The Kissing Booth 2 star Jacob Elordi said he was not, in fact, miserable filming the second installment of the Netflix rom-com. After fans speculated that the actor was just unhappy to be there, the actor dialed into an interview with Access Hollywood and addressed his “resting miserable face” — perhaps a distant cousin to the “resting b*tch face." Though, he also made the point that his Kissing Booth character, Noah Flynn, is just a “moody dude." His face just looks like that, OK?

“I have a resting miserable face,” Elordi explained. “You know what it is? It’s because I’m usually thinking a lot, about like, an insane amount about something ridiculous." The actor then switched gears, saying his "miserable face" actually works with his character. "He's not running around [happy]." As for those worried that he had a less than ideal time returning to film Kissing Booth 2, the actor reiterated that he “wasn’t miserable” and “had a blast” on the set of the film with co-stars Joey King, Joel Courtney, Maisie Richardson-Sellers, and Taylor Zakhar Perez.

In the interview, Elordi also revealed that he flew straight to Africa for Kissing Booth 2 after he finished work on Euphoria. “That was a dramatic shift mentally,” he said. “But there was a nice calm in going back to [Kissing Booth] and being able to settle into something I knew how to do and knew what to expect.”

“I never really woke up," Elordi added of the exhaustion that came after eight months of working on Euphoria. "I just got through it.”

Kissing Booth 2, the second installment of the film based on the Beth Reekles book series of the same name, debuted on Netflix on July 24. It follows high school senior Elle (King) as she struggles to maintain a long-distance relationship with her boyfriend Noah (Elordi) now that he’s in college. With new friendships and new classmates, Elle and Noah’s relationship is put to the test. And — spoiler alert — their relationship troubles are far from over.

Netflix announced on July 27 that Kissing Booth 3 is definitely happening. In fact, it's already been filmed in secret, so fans don’t need to worry about COVID-19 delaying the film. An exact premiere date hasn’t been set yet, but it’s planned for a 2021 debut.

Elordi’s involvement in the third film proves that there’s no unhappiness there — it’s just his resting miserable face, thank you very much.

More like this
Here’s Everything Coming To & Leaving Netflix In February
By Jake Viswanath
'The Queen’s Gambit' Season 2 Tweet Wasn’t From Anya Taylor-Joy
By Mary Kate McGrath, Jack Irvin and Grace Wehniainen
Here's How Netflix Should Adapt Prince Harry's Memoir Into A Movie
By Ginny Hogan
Twitter Is Mad At The Razzie Awards For Nominating A Child For Worst Actress
By Radhika Menon
Get Even More From Bustle — Sign Up For The Newsletter
From hair trends to relationship advice, our daily newsletter has everything you need to sound like a person who’s on TikTok, even if you aren’t.