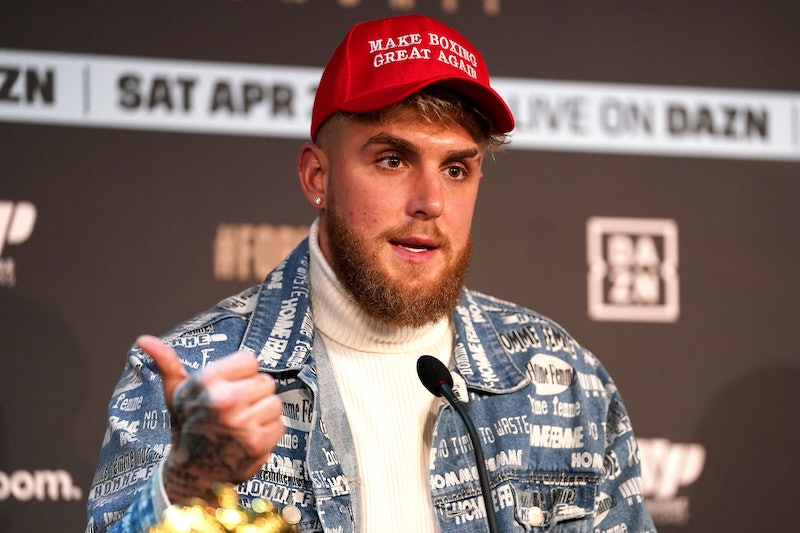 YouTube star turned professional boxer Jake Paul is ready for Kanye West and Pete Davidson to settle their feud. In a recent interview with TMZ Sports, the 25-year-old social media star said that his $60 million offer to get the rapper and the comedian to duke it out inside the boxing ring like “real men” is 100 percent real.

“I’m kinda sick of them going back and forth on social media and I think it’s affecting the kids’ lives, like Kanye and Kim’s kids,” the influencer told TMZ, referring to West and Kardashian’s four children — North, 8, Saint, 6, Chicago, 4, and Psalm, 2. “They’re gonna be the ones that take the most trauma from this.”

West hasn’t been shy about his feelings toward Davidson, who’s been dating his ex-wife since October 2021. On Jan. 14, the 22-time Grammy winner took a swipe at the SNL star in a track called “Eazy.” “God saved me from that crash / just so I can beat Pete Davidson’s ass,” referencing his near-fatal car accident from 2002.

The drama only escalated from there. In the song’s corresponding music video, released on March 2, West decapitates and buries alive a cartoon version of the King of Staten Island star. Kim was reportedly “really upset” by the video, but Pete hadn’t reached his breaking point... yet.

After Kim made her relationship with the comedian Instagram official on March 11, Davidson and West got into a heated text exchange on March 13. “I’ve decided I’m not gonna let you treat us this way anymore and I’m done being quiet,” Davidson wrote, according to Daily Mail. “Grow the f*ck up.”

West was clearly bothered. “Oh you using profanity, Where are you right now?” the rapper asked. “In bed with your wife,” Davidson clapped back. After several back-and-forth messages, Davidson offered to speak with the “Hurricane” artist face-to-face and help him on his mental health journey.

“You have no idea how nice I’ve been to you despite your actions towards me,” he wrote, explaining that he stopped SNL from making fun of West on multiple occasions. “I have your back even though you treat me like sh*t because I want everything to be smooth. But if you continue to press me like you have for the past 6 months, I’m gonna stop being nice.”

While it’s unclear exactly what Davidson has in mind, Paul is hoping that both parties will consider putting on boxing gloves and throwing punches. “Kanye, I got $30 million for you,” the YouTuber told TMZ. “He’s a billionaire so that might not excite him, but what will excite him is him beating up Pete.”

Paul went on to say that Davidson will likely be more receptive to the $30 million offer because “he used to live in his mom’s basement.” “$30 million to him I think is a lot of money,” the YouTuber said, adding that he’s “reaching out to their managers to actually make this happen.”

In terms of cost, Paul claims he has the funds to pay both parties. “We already have financial backers,” he said, revealing that Conor McGregor offered $50 million. “Put the money in the bank before the fight happens ... I can guarantee the money myself but we have partners and the money’s there. The money’s good.”

More like this
Did Pete Davidson Remove His Kim Kardashian Tattoos? Photos Point To Yes
By Alyssa Lapid
Everything You Need To Know About Kanye's Post-Kardashian Dating Life
By Bustle Editors
"Lavender Haze" Star Laith Ashley Breaks Down Filming With Taylor Swift
By Jake Viswanath
Twitter Is In Awe Of Taylor Swift’s “Lavender Haze” Music Video
By Jake Viswanath
Get Even More From Bustle — Sign Up For The Newsletter
From hair trends to relationship advice, our daily newsletter has everything you need to sound like a person who’s on TikTok, even if you aren’t.