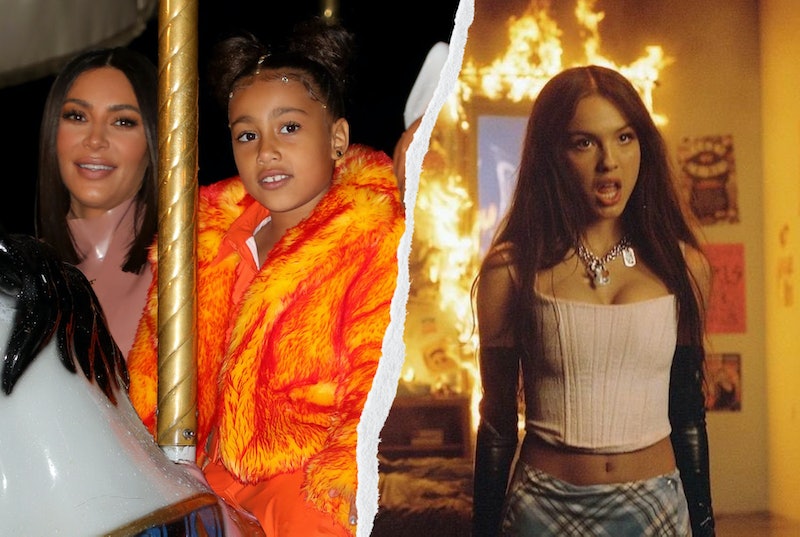 Didn’t they tell you that ... North West was a savage? Actually, nobody did, but when it comes to her mother, she pulls no punches. North just called out her mom Kim Kardashian because she apparently doesn’t listen to Olivia Rodrigo enough, despite Kim claiming to be a huge fan of the “drivers license” singer, and it was all captured on Kim’s Instagram Story.

On May 25, the Keeping Up With the Kardashians star shared a video of the swag that Olivia gifted her to promote her debut album Sour, including “drivers license” bumper stickers, a box of tissues, and a two-pound box of Sour Patch Kids customized with the singer’s face. “How cute is Olivia Rodrigo, you guys?” she gushed in the video, showing off the adorable gifts. “I can't wait for her album. You guys know I love ‘driver's license.’”

Well, not according to 7-year-old North, who can be heard saying “You never listen to it” in the background, much to Kim’s dismay. “Yes, I do! I listen to it all the time,” she responded, before enlisting backup in her 5-year-old son Saint West. “Stop, North. Saint, don’t we listen to it all the time in the car? Yes. Can you say that louder for the people to hear?” Saint hesitantly says “yes” for the cameras, giving Kim the affirmation she needed. Hey, at least he does what his momma tells him.

Kardashian didn’t seem to mind her daughter’s shade, captioning the video “NORTH!!!” with three crying-laughing emojis. For her part, Olivia seemed to love the whole thing, reposting Kim’s video on her own Instagram Story, as well as the reality star’s picture of her custom Sour candy hearts.

In addition to the swag, Olivia also gave Kim a handwritten note: “Kim, Thank you so much for supporting my music!” she wrote. “It means the absolute world. I just adore you and I wanted to give you a few goodies to celebrate the release of my 1st album Sour. Sending you and your fam so much love.”

Ironically, Olivia felt the impact of handwritten letters from one of Kim’s famous frenemies: Taylor Swift. Back in March, Olivia revealed that Taylor sent her sentimental gifts and a handwritten letter after the success of “drivers license.” However, as she told Billboard in May, she’s keeping Taylor’s sentiments to herself. “I don't want to divulge too much because it’s really sweet and personal, but she talks a lot about how, I think, you make your own luck in the world,” she said. “And when you do kind things to others, good things come your way.” Perhaps Olivia could now be the bridge for what may be the unlikeliest celeb friendship ever.

More like this
Kim Kardashian Gives “Bucket List Dream” Lecture At Harvard
By Alyssa Lapid
Olivia Rodrigo Manifested Finally Meeting Demi Lovato
By Jake Viswanath
Khloé Kardashian Writes Touching Instagram Tribute To Tristan Thompson’s Mother
By Alyssa Lapid
'RHOSLC’s Heather & Whitney Are Still On A “Friendship Break” After Season 3 Reunion
By Jake Viswanath
Get Even More From Bustle — Sign Up For The Newsletter
From hair trends to relationship advice, our daily newsletter has everything you need to sound like a person who’s on TikTok, even if you aren’t.