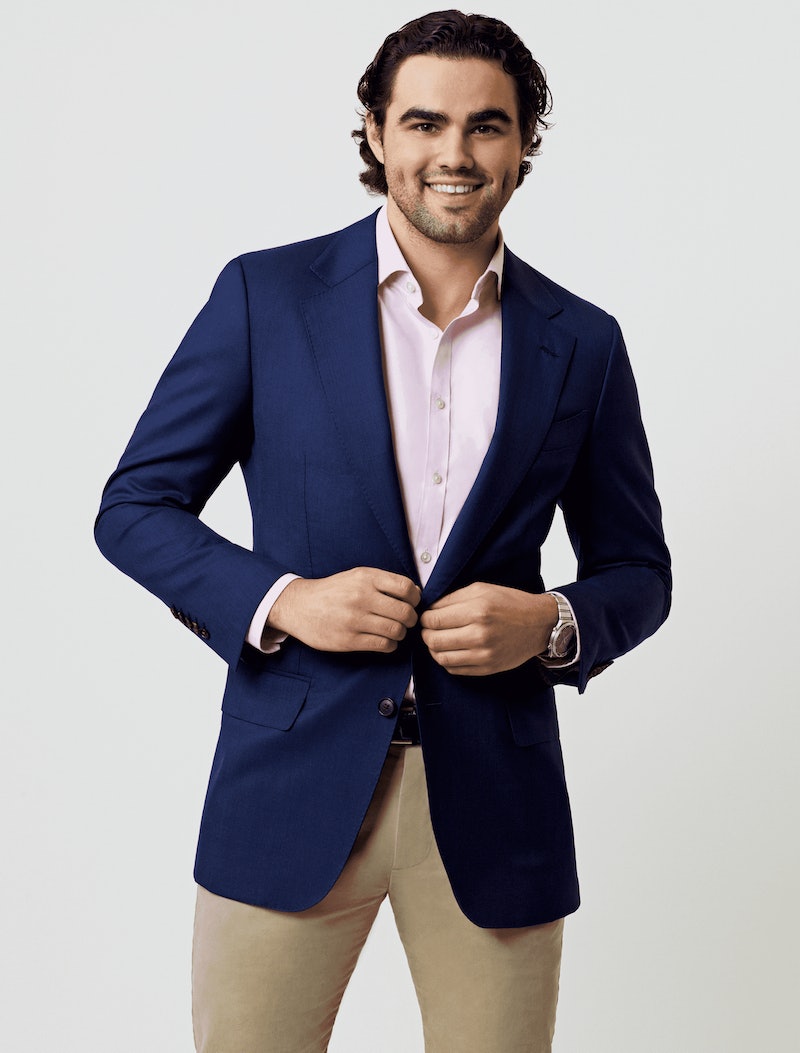 In a room full of executives, coaches, and contractors, there is always one Bachelorette contestant who stands out among the crowd of eligible bachelors. No, it’s not the magician, and it’s not the crypto guy. In the new season, premiering July 11, bachelorettes Rachel Recchia and Gabby Windey meet James Clarke, a 25-year-old man whose occupation is one of the franchise’s funniest — and perhaps most delicious ones – yet. As excited as fans may be for Rachel and Gabby to find love, there’s no getting around that any season of The Bachelorette is only as good as its cast, and James is sure to get people talking. Here’s everything we know about James and his Bachelorette journey.

What Is James’ Job?

James has one of the weirder jobs in the history of a franchise that hosted contestants with some seriously strange occupations. In his official ABC bio, James hints at his job by mentioning his Italian heritage before cutting right to the chase in the “Fun Facts” section. According to his bio, “nothing makes James happier than a plate of piping hot meatballs.” How Gabby and Rachel will compete with James’ love of sphered meat is yet to be seen. But considering James legitimately listed his occupation as “meatball enthusiast,” fans will likely see a reaction out of the bachelorettes.

However, James’ LinkedIn profile states he started attending DePaul University’s business school in January 2022. Whether James is still in the grad program is unclear, but that may explain why he preferred labeling his occupation as a meatball connoisseur over an MBA candidate. Let’s hope it goes better for James than it did for the last guy obsessed who was with food.

Despite all the meatball talk, James’ Instagram lacks any meatball content. It’s mostly filled with pictures of his family and friends, including shots from Runyon Canyon, some underwater adventure, basketball action, and, of course, Bachelorette promo. Even though James lists his hometown as Winnetka, Illinois, the Midwesterner seems to have found a new home in Los Angeles. The 25-year-old is so fond of the Golden State that his profile even has a saved story that features his favorite highlights of his time in California.

What Are James’ Interests?

James’ aforementioned basketball skills aren’t just for show on social media. His Bachelorette bio states that he’s a huge LeBron James fan, but the contestant actually played guard for the Spring Hill University Badgers in Mobile, Alabama. James was a standout on the team, finishing as the sixth all-time leading scorer in program history while also being named MVP in his sophomore season and All-Conference in his junior and senior seasons. He was so good that he played some Euro League ball over in Spain. His team bio also mentions his affinity for meatballs while detailing that his favorite movie is The Wolf of Wall Street, his favorite TV show is True Detective, and his hobbies include guitar and listening to John Mayer.

How Does James Do The Bachelorette Season 19?

James doesn’t appear in The Bachelorette’s brief trailer, so fans might not see much of him this season. But no one can say he didn’t come into the current cycle without lofty goals. In his bio, James says he’s looking for a wife who’s ready to mother six children, which is quite specific. He describes his life as “already wonderful” while hoping to embark on the “nonstop thrill ride that is parenthood” with his special someone. Lucky for James, the odds of finding that person have doubled this season, but only time will tell if Gabby or Rachel will find him to be her perfect match.