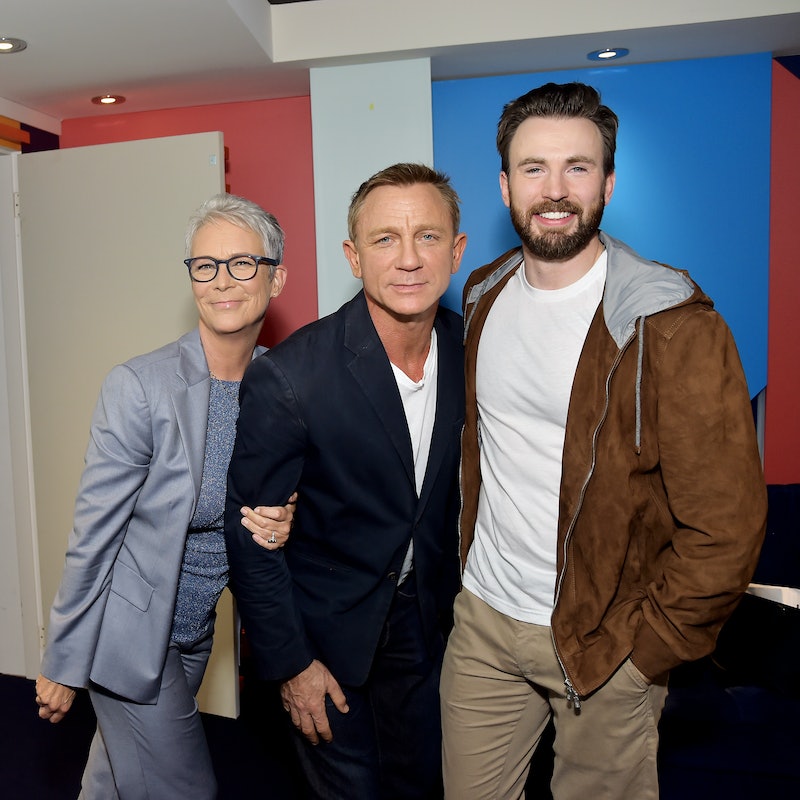 Jamie Lee Curtis is proud of Chris Evans, her onscreen son in the 2019 hit mystery film Knives Out, after his accidental nude photo leak nearly broke the internet back in September. But it's not for the reason you may think. Jamie Lee Curtis has a surprising theory about that Chris Evans photo, which will either confuse you or make you commend the actor for his keen intelligence — or perhaps both.

During an appearance on The Kelly Clarkson Show on Monday, Oct. 12, Clarkson asked Curtis about her reaction to her co-star's now-infamous NSFW image. On Sept. 12, Evans posted a video to his Instagram Story, but the video ended by showing his camera roll, which included one very naked photo. The actor quickly deleted the video and played it off as a total accident the next day, using the attention to encourage his followers to vote in the upcoming presidential election. "Now that I have your attention," he cleverly wrote on Twitter, "VOTE Nov 3rd!!!"

Curtis was seemingly impressed by the mishap. "I'm sweating already!," she quipped to Clarkson. However, she has a theory that Evans knew exactly what he was doing when he posted the initial video. "My question is this, he's so smart and such an unbelievably beautiful human being," she said. "I'm wondering if it was even planned." Some celebs are posting thirsty selfies encouraging their many followers to vote, including Kylie Jenner and Sterling K. Brown, so if Evans had indeed planned it, he would simply be ahead of the curve.

At the time of the leak, Curtis responded to Evans' tweet about voting with pride. "My boy. Proud of him. Got MY attention!," she joked. While the interaction may be slightly disturbing to viewers who watched Curtis and Evans play mother and son in Knives Out, she actually restrained herself from making an even creepier joke. "I could have made some sort of joke and said he took after his movie father, Don Johnson," she told Clarkson.

Regardless of whether Evans planned the leak or not, his decision to use the situation to raise awareness about voting is very fitting for the political activist, who recently launched A Starting Point, a website which connects voters to their local government officials. And he seems to have no regrets about the incident. In an interview with Tamron Hall on Sept. 15, Evans said the leak was a "teachable moment" for us all. "That’s called turning a frown upside down, Tamron,” he explained of his tweet. “It was an interesting weekend full of lessons learned. Things happen and it’s embarrassing but you gotta roll with the punches.”