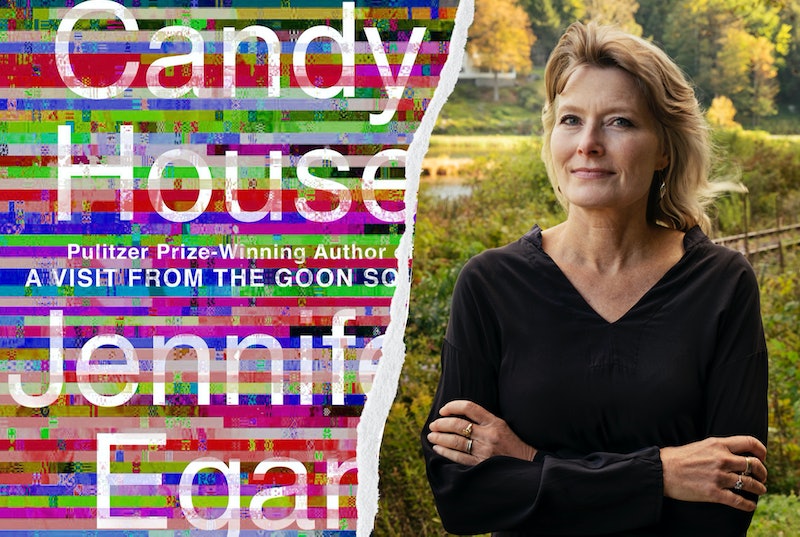 Last month, author Jennifer Egan released her seventh book, The Candy House, a sequel of sorts to 2010’s runaway bestseller, A Visit from the Goon Squad, which won the Pulitzer Prize in 2011. In the new novel, she borrows characters and storylines from the latter, and structures it similarly, with each chapter acting as a standalone story within a shared universe. Yet the world of Candy House has a completely different feel from Goon Squad: celebratory, gleaming, and futuristic, as opposed to the latter’s shady watering holes and bleakly lived-in hotel bathrooms.

“Goon Squad never really ended for me,” says Egan over Zoom. “There were characters whose lives and futures I knew, but that I couldn’t put into [the book],” she says, calling from California. “It felt weird to know things the reader didn’t. That’s one of these rules I have, that the reader come to know everything I know.”

The new book starts from the point of view of a tech mogul, Bix, who designed a form of collective memory that can be accessed publicly so that no event or emotion is ever lost. People archive artifacts like videos and photos but also feelings and thoughts, creating something like a virtual-reality experience when they inhabit someone else’s memory. Egan then traces the lives of characters within this world, including some from Goon Squad like Bix, Sasha’s son, Bennie’s ex-wife, and Lou and his daughters.

“The thought of all those lives, an infinite number of consciousness, having passed life on the cobblestones on these floors, within walls we can still enter, is so exciting to me,” says Egan, the recent president of PEN America.

If this sounds vaguely familiar, that makes sense. While the interplay between tech and consciousness has been regular fodder for sci-fi artists, it’s recently resurfaced in pop culture as well, from Severance on Apple TV+ to the recent The Matrix Resurrections, which premiered in December. Even Grimes spent her Vanity Fair cover story talking about the possibility of her being a simulated memory for Elon Musk. (Seriously.) In the literary world, new novels tap into these ideas too, like The Immortal King Rao by Vauhini Vara.

Egan uses these themes to explore privacy and individual identity. She loves “the centerpiece of a contradiction,” she says, like how the Internet is simultaneously connecting and distancing people. Another paradox she thinks about, which drove her to write this book, focuses on the ambiguity of data. On one hand, information is available about everyone and everything, she says, but when we use algorithms and Big Data to understand the world, we seem to know less as a result.

“Novels are there to entertain readers, period.”

The Chicago-born author has long been ahead of the zeitgeist. In Look at Me, she anticipated the darker aspects of reality television; in Goon Squad, she foresaw the invasiveness of surveillance technology. (A few years after its publication, NSA whistleblower Edward Snowden leaked information about the organization’s widespread surveillance use.) As for Candy House? Well, both virtual reality and Google Cloud already exist, but could a more comprehensive, virtual collective consciousness like Egan describes be far behind? Will we trade, delete, and add from our individual consciousness by putting unpleasant memories somewhere else?

Fortunately for readers, her approach to storytelling makes these questions fun: “Novels are there to entertain readers, period,” she says.

In her books, Egan often writes in different genres: a crime thriller in 2002’s Look at Me; gothic and suspense in 2006’s The Keep; historical fiction in 2017’s Manhattan Beach; and in Candy House, literary fiction with traces of noir and sci-fi.

She maintains control of the storytelling in each, and the real key to Egan’s dexterity is her ability to create empathy. In Candy House, we feel it when Bix, the Black scientist with Jobsian traits, meets a biracial woman who intrigues him in a way his white wife hasn’t for years. We feel it when Bennie jokes with his ex-wife about their promise to “never to make each other listen to each other’s dreams.” And we feel it when Lou, with all of his flaws, suffers a stroke. We root for them and their messy, very human lives.

I’ve spent years reading Egan’s fiction and award-winning articles on mental illness for The New York Times Magazine. Talking to her in real time, I was struck by how immersed she is in her characters’ experiences.

To create her books’ layered, often paradoxical characters, Egan interviewed experts and worked with sensitivity readers to accurately portray people whose backgrounds differ from hers. (She’s a fourth-generation Irish-American and grew up in San Francisco.) In one of my favorite chapters, she portrays Lincoln, a young man with autism who is the son of Goon Squad’s Sasha. Lincoln “crowdsources” the prettiness of his fiance, dissecting every last numerical rating.

You’ll close Candy House with a slight shiver, waiting to see what Egan will do next. In each of her books, she gives herself thrilling challenges. If this book is any indication, it’s a fair bet she’ll succeed.

More like this
At 28, Minnie Driver’s Personal Life Was “Falling Apart”
By Kate Dwyer
Becky G Once Had A Fear Of Speaking Spanish. Now She's Topping The Latin Charts.
By Tess Garcia
Zosia Mamet Opens Up About Her Eating Disorder
By Zosia Mamet
10 Must-Read New Books Out This Week
By K.W. Colyard
Get Even More From Bustle — Sign Up For The Newsletter