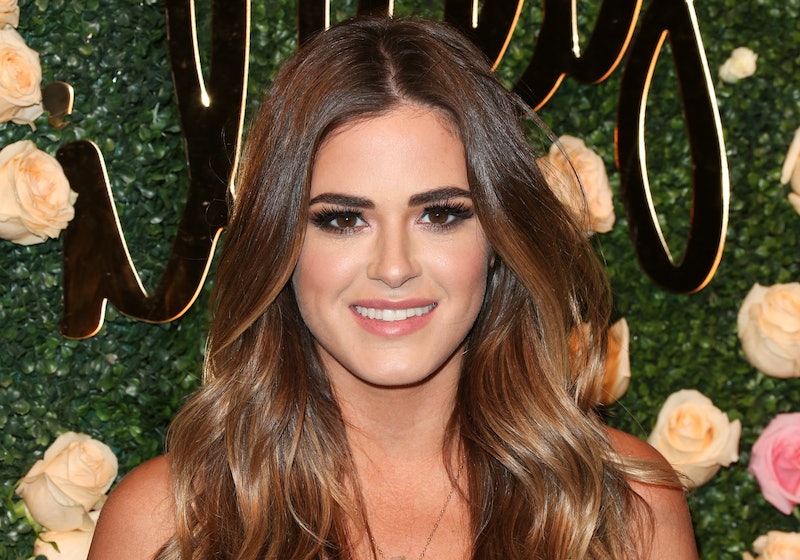 What could possibly one up a contestant shake up on this upcoming season of The Bachelorette? A host shake up, of course. JoJo Fletcher will reportedly replace Chris Harrison as host of The Bachelorette — but only temporarily. According to various reports published on Aug. 13, Chris recently left the quarantine bubble on set and traveled to Texas to drop his son, Joshua, off at college at Texas Christian University. As such, the longtime host will need to quarantine for 14 days before he can return to set. Bustle has reached out to ABC for comment, but did not receive an immediate response.

Chris documented his travels on Instagram with a photo of him with Joshua and his fellow dorm mates on Aug. 12. He expressed his “pride and excitement” about his son’s first year at college and wrote, “Now go take on the world and have the time of your life my boy.” Up until then, Chris had been quarantined on set at the La Quinta Resort & Club in La Quinta, California, a resort city located near Palm Springs and Coachella, with the cast and crew of Clare Crawley and (reportedly) Tayshia Adams’ upcoming season.

JoJo, who headlined Season 12 of Bachelorette in 2016, has already completed quarantine and is expected to join production soon, according to a source for E! News. The gig comes after JoJo and her fiancé Jordan Rodgers — whom she met and got engaged to during her season of the show — had to postpone their June wedding due to the COVID-19 pandemic.

It also comes after reports that Bachelor in Paradise alum Tayshia would replace Clare in the upcoming season, which has already run into its fair share of complications due to the pandemic. According to various outlets, Clare reportedly fell in love early on in the production process with contestant Dale Moss, a former NFL player, and would depart the season early on and make way for Tayshia. As for how the season will play out, Rob Mills, vice president of alternative programming at ABC, offered some insights back in June. While the usual travel is, of course, prohibited due to pandemic restrictions (a trip to Italy had initially been planned), Mills said there would be “plenty of different date locations that will feel hopefully as close to The Bachelorette as possible.”

The Bachelorette will return in the fall in the 8 p.m. Tuesday time slot. We can’t wait to watch JoJo (temporarily) fill Chris’ shoes.