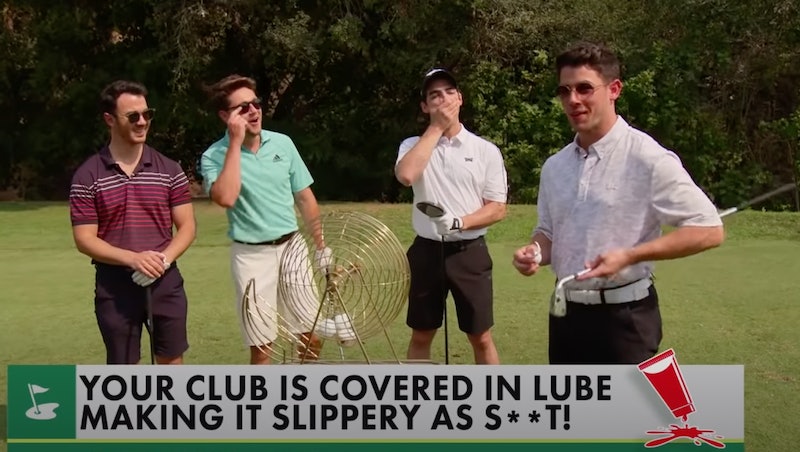 Niall Horan is basically the fourth Jonas Brother now, and he’s already gotten closer with one bandmate than fans would ever expect. In what may be the weirdest boy band crossover ever, Horan joined the Jonas Brothers for a spirited round of golf, as part of his Aug. 24 guest host stint on Jimmy Kimmel Live. But there were some catches.

Instead of aiming for a hole-in-one, Horan and the JoBros played “handicap golf,” meaning each player had a different difficulty they had to tackle on their turn. “Since we’re such good golfers we thought it’d be only fair if we were to play golf, we would handicap ourselves,” Horan told the band. “So in the Wheel of Stupidity here, we’ve got some balls with handicaps on them and we gotta do what it says.” Kevin Jonas had to deal with an airhorn being blasted in his face, while Joe had to spin around 10 times before swinging. Horan was forced to wear a full kilt, complete with out-of-tune bagpipes. “Of course the Celtic guy gets that one,” he quipped.

But the most hilariously intimate part of it all was when he helped Nick put lube on his golf club, which went just as well as you’d expect. Nick’s club swung out of his hand several times, while Joe threw his club into the trees. Kevin took a terrible shot, but at least his club stayed in his hands.

Horan ended up performing best, skillfully navigating around the huge bagpipes to take a decent swing. But his bagpipe skills are another story completely.

The JoBros weren’t Horan’s only guests for his Kimmel hosting stint. The One Direction alum interviewed Lizzo during the episode, and fans called for them to start dating after hearing their ultra-flirty banter. “This is the sexiest call I’ve ever been on,” she told the host. It only got flirtier after she said Horan was giving her a “one erection” and joked about that salacious Drake lyric from “Rumors.” “OK, so the original line was, ‘No I ain’t f*cking Niall yet,’ but the label said it was a little bit provocative so I changed it to Drake,” she said.

As far as fans know, Horan is currently single, and while there’s murmurs on DeuxMoi that Lizzo has been spotted with a mystery man, she’s not officially dating anyone, so there’s no reason why these two artists can’t become music’s next power couple. If that doesn’t happen, then a Jonas Brothers and One Direction crossover tour a la NKOTBSB will just have to do.

More like this
Olivia Wilde & Harry Styles' Relationship Timeline Started With 'Don’t Worry Darling'
By Jake Viswanath
Everything To Know About Taylor Swift’s 10th Studio Album, 'Midnights'
By Grace Wehniainen and Jake Viswanath
Twitter Is Freaking Out Over Rihanna’s 2023 Super Bowl Halftime Show Announcement
By Stephanie Topacio Long
What Demi Lovato Really Thinks About Child Stardom, Depression, & Sobriety
By Radhika Menon
Get Even More From Bustle — Sign Up For The Newsletter