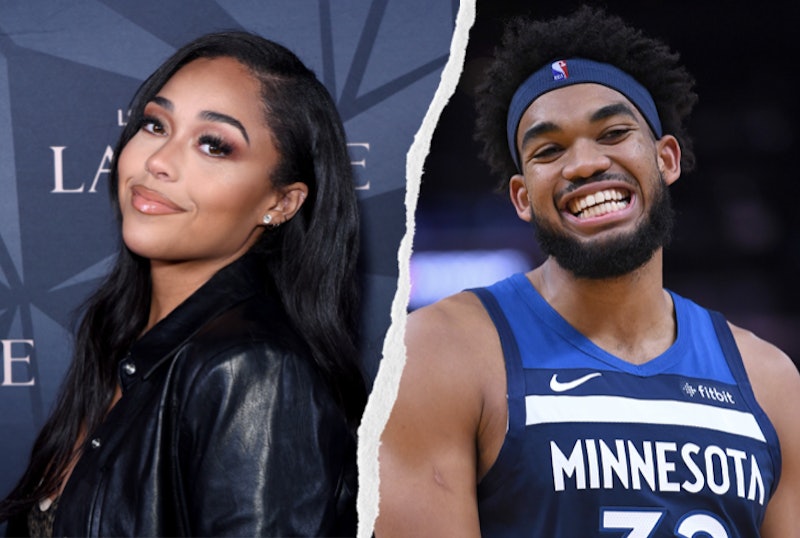 Jordyn Woods has found a new beau — and it looks like she's found a new sense of self as well. Just a week after rumors first began swirling about her and the NBA player, Jordyn Woods made her relationship with Karl-Anthony Towns Instagram official with a series of photos from a romantic beach getaway. In the pictures, Woods and Towns — who are wearing matching Versace swimsuits — cozy up to one another and pose while relaxing in the sand.

"I found you, then I found me," the model captioned the post, which earned comments of support and happiness from her family and famous friends, including Gabrielle Union, who posted four black hearts. Towns, who plays forward for the Minnesota Timberwolves, also shared photos from the trip on his own Instagram account, along with a sweet caption praising Woods. "There are darknesses in life and there are lights, and you are one of the lights, the light of all lights," he wrote, along with a star emoji.

According to Page Six, the couple were friends for quite some time before they began dating, with Woods describing the athlete as "like a brother to me" on Instagram in August 2019. On Sep. 23, however, fans began speculating that things had become romantic when Woods showed off several lavish birthday presents from Towns on her Instagram Story. In addition to sharing a photo of several Birkin bags, Woods also revealed that Towns had gifted her a signed Michael Jordan jersey as part of her Jordan-themed 23rd birthday celebrations.

Woods' Instagram post comes after she opened up about the "dark place" she was in following the 2019 Tristan Thompson cheating scandal during an appearance on the YouTube series Now With Natalie. In February 2019, multiple outlets confirmed that Thompson and Khloé Kardashian had officially split around the same time Hollywood Unlocked reported that the NBA player had been seen kissing Woods at a party in Los Angeles. Though she later denied "being intimate" with Thompson, Woods was attacked in the press and on social media, and her friendship with Kylie Jenner fell apart as a result of the scandal.

"I remember just sitting in a very dark place," Woods told Now With Natalie host and friend Natalie Manuel Lee in the interview, which was shot before the COVID-19 outbreak, but released on Sep. 27. "I had my family to talk to, I had you to talk to, but I just felt like I had no one... You take everything you think you know for a whole decade, the people you think you know, the life you think you know, everything that you've grown up doing and you take it all away from someone. I didn't even know how to feel."

In the wake of the scandal, Woods said that she felt like "everything in my life changed," and that she was no longer sure who was on her side. "I deleted everything off of my phone. I wouldn't respond to anyone. I responded to about two people. I pushed people away that probably shouldn’t have been pushed away but I just couldn't trust anyone," she explained. "I did feel like everything was against me, and the only thing I had to lean on was my faith and my family."

While she is unhappy that "people were hurt" as a result of the situation, Woods explained that she has accepted her new normal, over a year later. "I'm not happy that people were hurt and people had to go through what they went through," the she admitted. "It was a lot for everyone, my family, other families, friends, and not in a million years have I had a negative intention to do something bad to anyone I love. I wouldn't say I'm happy something like that happened, but I'm happy I was able to become who I am today."

More like this
Everything You Need To Know About Kanye's Post-Kardashian Dating Life
By Bustle Editors
Khloé Kardashian Writes Touching Instagram Tribute To Tristan Thompson’s Mother
By Alyssa Lapid
Kim Kardashian Gives “Bucket List Dream” Lecture At Harvard
By Alyssa Lapid
Travis Barker's New Tattoo Is Causing Some Awkward Confusion Among Fans
By Stephanie Topacio Long
Get Even More From Bustle — Sign Up For The Newsletter
From hair trends to relationship advice, our daily newsletter has everything you need to sound like a person who’s on TikTok, even if you aren’t.