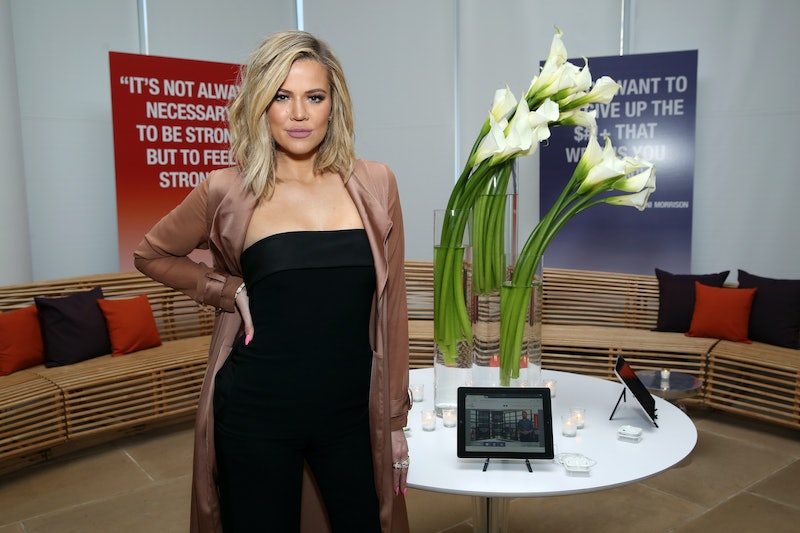 After Jordyn Woods shared her side of the story on Red Table Talk on Friday, Khloé Kardashian clarified her thoughts on the Tristan Thompson cheating scandal in a series of emotional posts on Twitter. The reality star revealed that her main focus in the wake of the reports of Thompson's rumored infidelity with Woods is her daughter, True, and explained the emotions behind her very public response to Woods' conversation with Jada Pinkett Smith on the actress' Facebook Live show.

"This has been an awful week & I know everyone is sick of hearing about it all," Khloé began her tweets, explicitly addressing Thompson's rumored infidelity for the first time since the reports first surfaced on Feb. 19. She also seemed to regret accusing Woods of "lying" and declaring her to be the "the reason my family broke up," in her angry tweets on Friday afternoon, saying in her latest tweets on Saturday, "I’m a rollercoaster of emotions & have said things I shouldn’t have."

The Good American founder then seemed to confirm the reports from Hollywood Unlocked and TMZ that Thompson cheated on her. "Honestly, Tristan cheating on me & humiliating me, wasn’t such a shock as the first time," Khloé wrote, adding, "What’s been harder & more painful is being hurt by someone so close to me. Someone whom I love & treat like a little sister."

E! News confirmed that Khloé and Thompson had split on Feb. 19, after TMZ and Hollywood Unlocked's posted articles stating that Woods and Thompson reportedly hooked up at a house party. (Bustle reached out to reps for Woods, Kardashian, and Thompson for comment, but has not heard back.) During Woods' Friday interview on Red Table Talk, she claimed that there was "never anything intimate" going on between herself and Thompson before, during, or after the house party. She did, however, claim that Thompson kissed her as she was leaving the party early the next morning, but stated that there was "no passion" involved. (Bustle reached out to Thompson's agent about Woods' latest comments, but did not receive an immediate response.)

However, Khloé defended Woods against accusations that she is responsible for her recent breakup with Thompson, explaining that the NBA star alone should take the blame for the end of their relationship. "Jordyn is not to be blamed for the breakup of my family. This was Tristan’s fault," she wrote, before noting that she's focusing her energy on her ten-month-old daughter True in this difficult time. "I have to move on with my life & count my blessings, my family, my health, & my beautiful baby True," Khloé concluded.

According to People, Khloé also unfollowed Thompson on social media on Saturday, a week after unfollowing Woods on Instagram. On Friday, after Woods' Red Table Talk conversation went live, the reality star tweeted that she and Thompson were handling the cheating reports out of the spotlight. "Tristan is the father of my child. Regardless of what he does to me I won’t do that to my daughter," Khloé wrote. "He has been addressing this situation PRIVATELY."

Before her tweets in response to Wood's episode of Red Table Talk, the closest that Khloé came to explicitly addressing the reports of Thompson's rumored infidelity was when she thanked her fans for their support on social media. On Feb. 26, the reality star wrote on Twitter, "Hi loves, wanted you to know that I appreciate you! I’ve been reading your kind words and they really are a blessing to me. I love you! Thank you Thank you! I’ll be back when I’m in the mood to chat with you all. Until then remember to be kind to one another."

On Friday, March 1, Khloé also shared a photo on Instagram in which she revealed that she was focusing on the good things in her life during this difficult time. "Start each day with a grateful happy heart. Count your blessings over your burdens. Smile, you got this!" she wrote alongside a snap of herself pulling a goofy face.

While this is likely not the last that fans will hear about Thompson's reported infidelity, it's clear that Khloé has made her feelings on the situation — and how she plans to get through the scandal — very clear, once and for all.