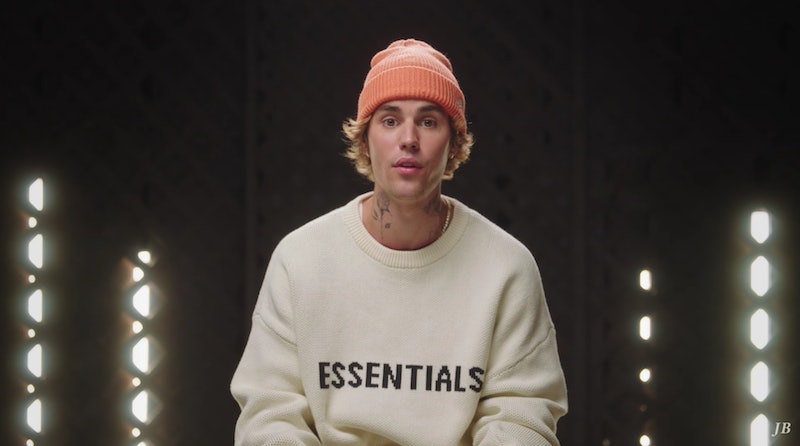 Justin Bieber is in a good mental state right now, and he's able to appreciate it much more because of all of his past struggles. In a new episodes of his YouTube documentary, Justin Bieber: Next Chapter — which was filmed during the COVID-19 lockdown — Bieber opened up about past suicidal ideation, his experiences with mental illness, and how he was able to find peace and healing.

The singer reflected on his career and the toll it took on him mentally after watching his "Lonely" music video with his team. "I had no idea that this life would take me by storm. I had no idea that I would just get sucked up by all of this stuff," Bieber explained, revealing that the constant barrage of attacks and negative comments he endured as a teenager really "hurt" him, even though he tried to pretend that he was fine.

"You are this 'star' that is supposed to have it all together, and you don't realize the power of just saying, 'This is how I'm feeling.' I just kind of let the insecurities of everything going on dictate how I started to move," he said. "There was times where I was really, really suicidal. Like, man is this pain ever going to go away? It was so consistent, the pain was so consistent. I was just suffering, right? So, I'm just like, man, I would rather not feel this than feel this."

Bieber's manager, Scooter Braun, admitted that he wishes he had gotten the singer into therapy "day one," in order to make sure that he had "someone separate from [the team] to talk to." And while Bieber credits much of his current healing and stability to his religious beliefs, he also advised his fans to open up to a therapist if they are also experiencing anxiety, depression, or suicidal thoughts.

"I just would encourage people, like, 'Hey, if you're feeling lonely, talk about it. Say it out loud,'" he told the cameras. "There's a freedom in that. I could have avoided a lot of pain."

The singer has long been open about his experiences with mental illness and addiction, and his journey toward reaching a place of health and happiness. "I feel isolated. You're in your hotel room and there are fans all around, paparazzi following you everywhere, and it gets intense," he told the NME in November 2015 about the ways his fame affects his mental health. "When you can't go anywhere or do anything alone you get depressed. I would not wish this upon anyone. ... I'm struggling just to get through the days. I think a lot of people are."

In March 2019, he told fans on Instagram that he needed to prioritize his mental health before he could focus on making new music, especially since he was so unhappy during the Purpose World Tour that he abruptly canceled it halfway through. "I am very focused on repairing some of the deep rooted issues that I have as most of us have, so that I don’t fall apart, so that I can sustain my marriage and be the father I want to be," he wrote at the time. "Music is very important to me but Nothing comes before my family and my health."

As a result of prioritizing his mental and physical health, Bieber revealed in Next Chapter that he's finally in a better headspace, and he wants to share his experiences in order to help others who may be able to relate. Explaining that he's "in the best place of my whole life right now," Bieber said, "I want to be the type of person and leader who can tell people, 'You don't have to put on a front. You don't have to act a certain way. Who you are is enough.'"