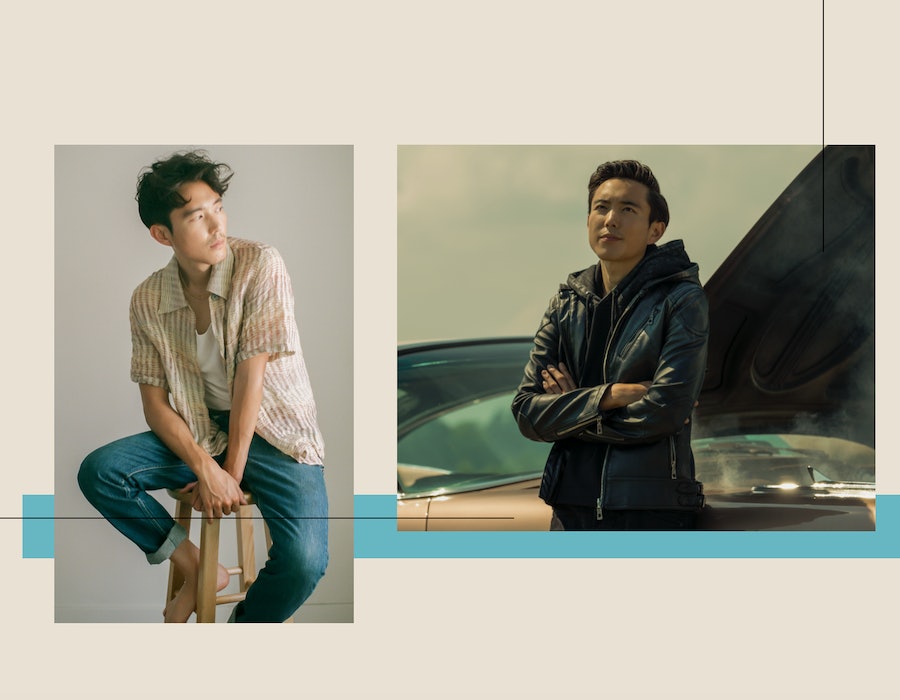 It doesn't take long to realize that the same warmth and softness that's endeared the late Ben Hargreeves to Umbrella Academy fans comes directly from star Justin H. Min. A creative soul who worked as a photojournalist before pivoting to acting, he once kept a Tumblr of intimate, philosophical musings and speaks with careful consideration for each word. It's this sensitivity that he brings to Ben. "I guess I'm a decently nice, warm person so they kind of brought that forward in the character," Min explains with a sheepish laugh. "We didn't have source material to really base Ben off of, so I think [showrunner] Steve Blackman and the writers, in a way, wrote for me."

A native of Cerritos, California, Min played bit parts in various short films and TV shows before landing his breakout role as the ghostly Ben, turning what was only a deceased background character in the comics Umbrella Academy is based on into a beloved and wholesome foil to the rest of the dysfunctional Hargreeves siblings. In Season 1, Ben functioned as a sort of moral compass for the ghost-communing Klaus (Robert Sheehan), encouraging his sobriety, pushing him to connect more with their siblings, and attempting (but often failing) to rein in Klaus' wildest and most destructive ideas. Fed up with being an unseen sidekick, Ben began exploring his own agency and romantic feelings in Season 2. A potential Season 3 will push Min even further to the fore, albeit in a much different light. Though Ben finally passed over to the afterlife in the Season 2 finale, his siblings returned to 2019 to find a new version of him: this one a snarky, jaded member of the new Sparrow Academy who's still very much alive.

What that means for the Hargreeves remains to be seen, but for now, Min has his sights set on another kind of reanimation. He's set to star in the upcoming A24 sci-fi film After Yang as a malfunctioning robot purchased by a man in order to teach his adopted Asian daughter about her culture. Like his work with the undead Ben, After Yang allows Min to explore the nuances of what it means to be alive, yet not.

First off, I have some burning Umbrella Academy questions for you. Based on Sir Hargreeves' pretty scathing comments to the kids at the funeral in Season 2, a lot of people assume it's Ben's siblings who accidentally caused his death. Does that idea hold any water for you?

Yes, absolutely. I think that that's one of the main reasons why the family split apart after Ben's death, because not only were they dealing with their crazy father, but they were also all dealing with the guilt of having some sort of responsibility for their brother dying. Who holds more of that guilt and responsibility is a mystery still, but I think to a certain extent, all the family members feel that.

The fact that you see Ben's picture on the mantel has led people to assume that Ben is now Number One. Can you see him changing into Emo Ben based on being Number One?

I would be curious to see if the number system still applies to this new Sparrow Academy. He does seem like a leader of the group. He's the one talking directly to Hargreeves; he's front and center.

A big question people still have is why Ben continued to age as a ghost. Do you have a theory?

For me, it's always been a projection of Klaus' consciousness. He sees Ben in the same way that he would imagine him to be growing up alongside of him. It's through the perspective of Klaus' eyes that we're seeing Ben age.

It's still not that common to see Asian Americans in superhero and comic book stories. What did it mean for you to find out that Ben was getting this expanded role for future seasons?

As an actor, first and foremost, just to have a job is a dream. [But] on a deeper level than that, as an Asian American [and] particularly someone who's been in this industry now for seven years, it's hard to find these roles. It's hard to find characters who don't feel stereotypical, who don't feel one dimensional. I've gotten thousands of messages [from] people I see on the street, people at Comic Con, from Asian Americans, just coming up to me and telling me that they never saw a superhero who looked like them onscreen. And that is so powerful and moving. I know firsthand what it was like to grow up and not necessarily see myself in mainstream media, so for someone to say that I represent that for them is an honor.

In After Yang, you play a robot who is a well of cultural Chinese knowledge. How does your own ethnicity as a Korean American reshape how the story will be told?

That's something that we discussed quite a lot [with After Yang director Kogonada] going into the production. On one hand, does every Japanese American actor have to play a Japanese American [character] every time? Does every Korean American actor have to play a Korean American [character] every time? Is there some wiggle room there? I think there is. But specifically for this character, it actually made sense that I did happen to [have] a majority Korean heritage. We had this really interesting discussion about how, if these types of robots did actually exist in a futuristic society, what would they look like? And because of the popularity of Korean pop, of Korean dramas, of what we refer to as the Korean wave now, we thought it would be really interesting if Yang was a Chinese robot who actually has a lot of Korean features. Because hypothetically speaking, in that society, white people, Westerners, would be creating this robot. From the vantage point of a white person creating this robot, they wouldn't know what makes Chinese features Chinese features, or Korean features Korean features.

The sci-fi genre has a pretty fraught relationship with Asian people. It's interesting to hear how After Yang pushes up against that and makes space for you to play an Asian robot who is valued for being Asian.

From the very beginning [Kogonada] knew what it meant to tell a nuanced story that featured Asian American people, as he did so beautifully with Columbus, his first film. What resonates for me with this film is that it does touch on all those things: what does it mean to be Asian? What is Asian American identity? Is this robot actually Chinese, and what does that represent? Is this robot Chinese because it's been programmed to know a lot of Chinese facts and history?

And these are things that I grapple with on a daily basis as a Korean American walking in this Western American society. What does it mean for me to be Korean American? Is it because I love my mom's kimchi stew, or because I know my mother tongue? These are all themes and questions that are explored in the movie. And yet that's not what the movie is ultimately about. It does explore those things, but it does it in such a subtle, nuanced way that at the end of the day, the heart of this movie is about this family grappling with this robot who's slowly breaking down, who's become an integral part of this family.

Since you're very aware of how Asian people are represented onscreen and you know there are few roles for them, what kinds of projects are you looking forward to doing next? How often do you look for roles where race is an essential aspect of the character, versus just being incidental to the character?

I don't have a clear answer for you, and it's something that I actually think about every day. I'm sure that my response will change, and I think that's the beauty of being an actor and an artist. There are some projects and stories that resonate with you at a certain moment in your life, and then others that resonate with you at a different stage. Right now, I do tend to gravitate towards stories [where] it's not necessarily about the Asianness, but of course my Asianness and my Korean Americaness will be imbued in [the part].