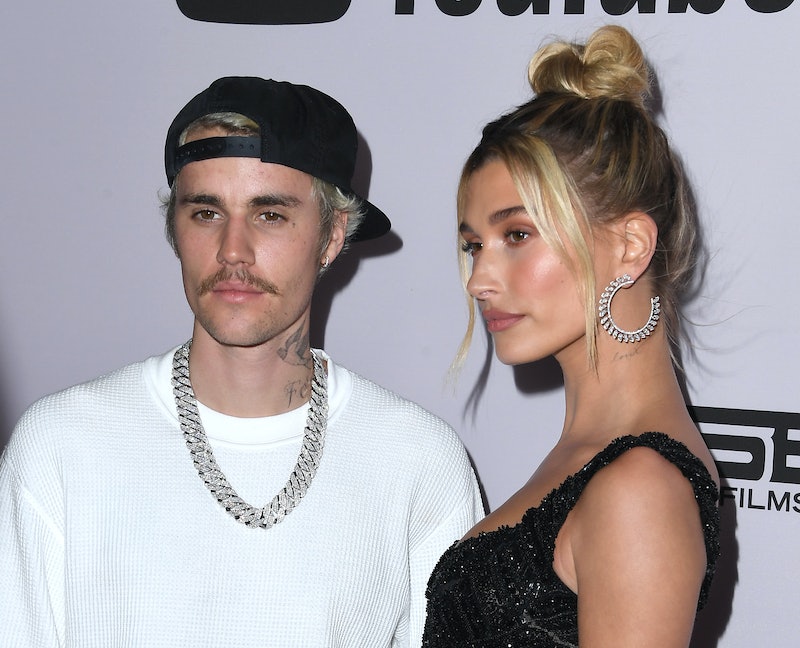 The Biebs is trying to take the "high road" despite people's negative comments about his wife. On Dec. 3, Justin Bieber slammed a "Jelena" fan for attacking Hailey on Instagram and encouraging fans of his ex, Selena Gomez, to do the same. "I just wanted to share this so that people get an idea of what we face on a day to day," the singer wrote, before sharing a video of an unidentified woman encouraging people to "bombard" Hailey's upcoming Instagram Live with comments about Bieber's former relationship with Gomez.

"This sad excuse of a human being just encouraged people on video to literally go after my wife telling people to say that my previous relationship was better and so forth," he explained on his Instagram Story. "It is extremely hard to choose the high road when I see people like this try and rally to gather people to bully the person I love most in the world." In another post on his story, Bieber noted that he didn't want to let this person — or anyone else who posted negative comments on Hailey's account — take away his joy.

"I think about her life and how miserable she must be to want to spend her life trying to make others feel small," the pop star continued, adding that this person is missing out on opportunities to spread love and positivity. "Life is fulfilling when you uplift and add value to people!" he wrote. "A life where you want to make others feel small will leave you with no friends and no real JOY." The singer concluded by sharing a series of romantic photos of him and Hailey modeling clothes from his Drew House line.

Hailey shared her husband's defensive posts on her own Instagram Story before addressing the woman's remarks and revealing how hard it's been dealing with so much hate online. "I usually stay quiet and don't acknowledge these things because I need to protect myself and my mental [health]," the model wrote. "But it has truly gotten to a level of anger and hate that is shockingly unhealthy and sad. I would never in a million years wish for someone to be treated this way and I will never condone this kind of hateful behavior."

Like Bieber, Hailey expressed empathy for the woman leading the charge of negative comments and encouraged her followers to send well wishes her way. "Wishing the young woman in that video all the best, I hope she finds love, peace and happiness in this life!" she wrote. Hailey also expressed the importance of not pitting women against each other. "I want only to support, uplift, and encourage other women in this industry and wish them nothing but love and success," she wrote.

Since the couple went public with their engagement in the summer of 2018, Hailey has dealt with a lot of online attacks from fans who want to see Justin and Selena get back together. "It's hard to focus on your well being and mental health when each time you open Instagram someone is tearing apart your job, or your relationship or essentially any of the things in your life that are positive," the model wrote on her Instagram Story in October 2018. "I won't let people make me feel like I'm doing something wrong by enjoying my life and being happy."

In November 2020, Hailey also made it clear that her reconciliation with Bieber — whom she originally dated in 2015 — had nothing to do with his on-and-off relationship with Gomez. "Contrary to popular belief, he had been single for a while and I had been single and we were kind of just trying to figure life out," she said on Ashley Graham's Pretty Big Deal podcast. The pair recently celebrated their first wedding anniversary, which means it's officially time for Jelena fans to move on, once and for all.