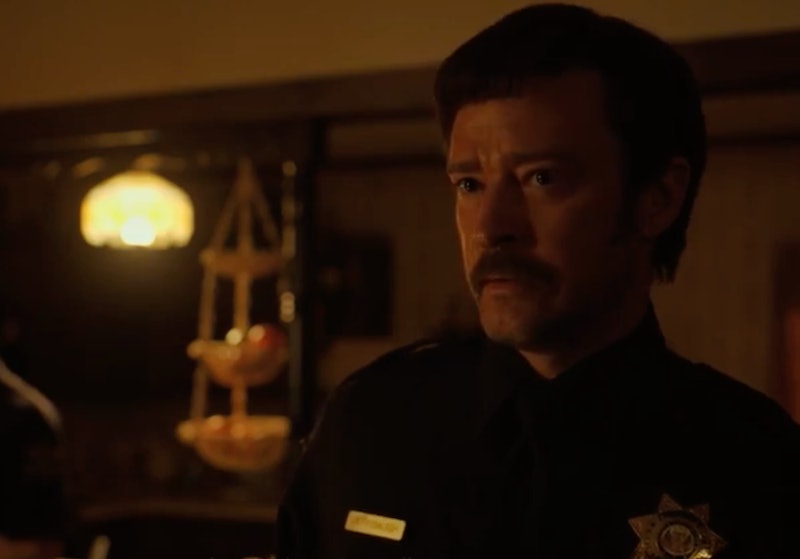 That detail is among the many that really happened after Deffibaugh was dispatched to the Gore family’s Wylie, Texas, home the night of the killing. “It’s easier when you have to testify,” he explained to In & Around Magazine in May 2020 of his reliance on photographs for evidence. Deffibaugh did, in fact, testify at Montgomery’s 1980 murder trial, too.

Other scenes deviate more from the real-life events. After Timberlake’s first joint Candy scene with Biel in a police station interrogation room, his character also spots blood on Montgomery’s shoe. Clearly suspicious of the woman he’d learned had previously been in an extramarital affair with the victim’s husband, Allan Gore, he asks to photograph her cut, bruised foot, which she blamed both on a broken storm door and a rough play session with her children.

According to the real Deffibaugh, it’s true that they did not initially suspect Montgomery, but he only sat in on the interrogation, which Dallas County had led. He did, however, take pictures of Montgomery, as was customary for him, and noticed three of her fingernails were shorter than the others. (On screen, he and another officer, played by Jason Ritter, noticed her broken nails during her interview at the station.) His discovery led the Texas Rangers to exhume Gore’s body, then already buried in Kansas, to check her fingernails, too. Authorities also found Montgomery’s hair in the Gores’ bathroom, where she’d showered after striking Gore with an ax 41 times in what she later claimed was self-defense.

Because he was wearing a suit and tie at the time, Deffibaugh was asked to arrest Montgomery for murder. “I read her her rights in front of a TV camera at the McKinney courthouse,” he said. Jurors bought the self-defense claim, though, and eventually found Montgomery not guilty of murder. Explaining that the judge allowed the jury to see only one photo of Gore, Deffibaugh also later claimed that Montgomery and her lawyers were friends with three of the 12 jury members, including the foreman, who was the defense attorney’s daughter’s soccer coach. Even so, he said that he will “never understand the reason why” they acquitted Montgomery of all charges after less than five hours of deliberation.

After the trial, Deffibaugh became the Collin County fire marshal in 1996, serving in the position until his retirement in early 2011. He has often guest lectured for criminal justice classes about crime scene handling and even has a PowerPoint presentation on the decades-old Gore case at the ready. One year before he retired, Deffibaugh told The Dallas Morning News that “every June 13th” he still thinks about the killing and all the odd coincidences relating to the number 13 that surround the case.

Deffibaugh has also discussed the 1980 case on Oxygen’s Snapped, and he has a theory about public interest in the gruesome killing. “I think it’s about the use of the ax,” he told the Dallas paper in 2010. “People don’t use that very often to murder someone.”

More like this
Betty Gore’s Daughter Honored Her After She Became A Mother Herself
By Brad Witter
The True Story Of Candy Montgomery From Hulu’s True Crime Series
By Radhika Menon
Where Is Allan Gore Now? The ‘Candy’ Subject Moved On Shortly After Betty’s Death
By Gretchen Smail
Michael Peterson & Sophie Brunet’s Relationship Timeline
By Morgan Leigh Davies
Get Even More From Bustle — Sign Up For The Newsletter