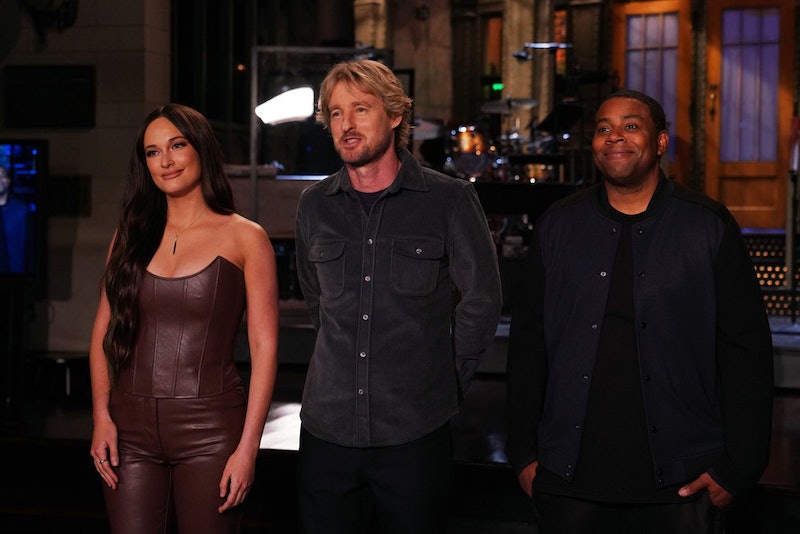 During Kacey Musgraves’ Saturday Night Live performance on Oct. 2, the Grammy-winning musician got Twitter talking — not just for her dreamy vocals on “justified,” but for her daring outfit (or lack thereof), too. Cast in moody blue and pink lighting, Musgraves’ look initially had viewers questioning if they were seeing correctly. “Wait a min,” wrote user FitBlonde19. “Is Kacey Musgraves just performing in cowboy boots on SNL?! Like no clothes?!” AnnoyingNcute voiced similar surprise: “Guys Kacey Musgraves was naked on SNL right? Jesus she’s iconic,” the user wrote. Save for the possibility of TV magic, Musgraves did seem fairly unclothed for her return to the SNL stage. Unless a guitar counts as clothes — which, why not?

As they overcame the initial surprise, many viewers also wondered if the performance look was a reference to Forrest Gump, in which Jenny (Robin Wright) sports a similar getup at one pivotal moment. “Anybody else get Jenny vibes,” wondered user naomicanyounot, while Lettie4u simply said, “this is how I’ll remember Kacey Musgraves ... She’s Jenny now.”

Now we know, officially, that the “Breadwinner” singer is very much here for the artistic homage. After her performance, Musgraves herself took to Twitter to confirm the inspiration, simply tweeting a still of Jenny from the film. Of course, Musgraves just put out an entire 50-minute film to accompany her new album, Star-Crossed, so it’s no surprise that she embodied cinematic flair for her big SNL moment.

Fans celebrated the unforgettable look and mesmerizing performance on Twitter.

Though Musgraves’ SNL spot naturally attracted her longtime fans, it also earned the pop-country singer a few new followers over the course of the evening.

More like this
Cruz Beckham Teased New Music With An Adorable Nod To Mom Victoria Beckham
By Stephanie Topacio Long
Pedro Pascal Barely Got Through The "Lisa From Temecula" 'SNL' Sketch
By Stephanie Topacio Long
Michael B. Jordan Tackled His "Public Breakup" With Lori Harvey On 'SNL'
By Brad Witter
Grammys Host Trevor Noah Made Adele's Dream Of Meeting The Rock Come True
By Brad Witter
Get Even More From Bustle — Sign Up For The Newsletter
From hair trends to relationship advice, our daily newsletter has everything you need to sound like a person who’s on TikTok, even if you aren’t.