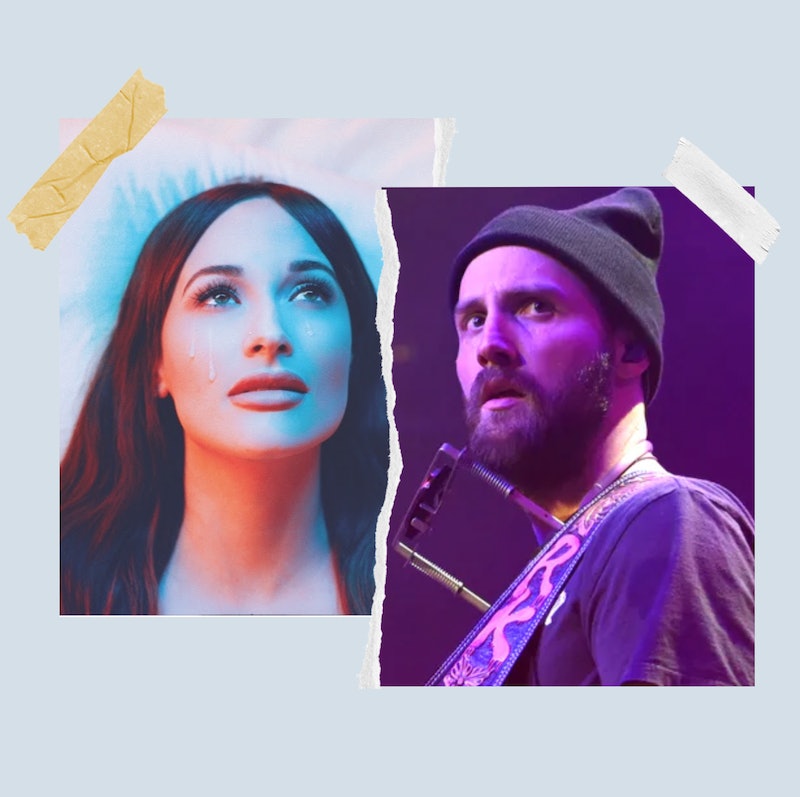 Kacey Musgraves has followed up her critically acclaimed Golden Hour, which won the Grammy for Album of the Year in 2019 and was partly inspired by her love of then-husband Ruston Kelly, with a new album filled with heartbreaking lyrics of love lost. The 33-year-old singer released Star-Crossed — essentially a divorce album accompanied by a full-length feature film — on Sept. 10, and it’s already wowing critics sonically and lyrically. It comes about a year after the superstar separated from her husband Kelly, a fellow country musician.

The two had been married for three years when they announced their split, which Musgraves finds a way to mention directly or allude to it in seemingly every track on the project. A quick listen and look at the lyrics throughout Star-Crossed shows it is almost all about Kelly, their love, her loss, and how she’s finding a way to move on (she’s now happily dating dating Cole Schafer).

Some of the lyrics on Star-Crossed are cryptic and up for interpretation, while many others are indisputably about Kelly and Musgraves’ marriage and divorce. Here are 10 of the best and most direct lines on the singer’s new album that are about her relationship and its demise.

1. From “What Doesn’t Kill Me” — “Golden hour faded black / Exited and ain’t coming back”

2. From “Star-Crossed” — “Let me set the scene / Two lovers ripped right at the seams / They woke up from the perfect dream / And then the darkness came.”

3. From “Camera Roll” — “Chronological order ain’t nothing but torture / Scroll too far back, that’s what you get / I don’t wanna see ’em, but I can’t delete ’em”

4. From “Star-Crossed” — “I signed the papers yesterday / You came and took your things away / And moved out of the home we made / And gave you back your name”

6. From “Justified” — “Movin’ backwards, hurt comes after / Healin’ doesn’t happen in a straight line” ... “I’m more than just a little justified / To touch somebody / You know I tried to make that you / And when you lied, said you didn’t want me / Tell me, what was I supposed to do?”

7. From “Breadwinner” — “I wish somebody would've told me the truth / Say he’s never gonna know what to do / With a woman like you”

8. From “Hookup Scene” — “A pretty face might get you far / But still it can’t replace / The kind of real connection that I crave / The kind we don’t have anymore”

9. From “Hookup Scene” — “If you’ve got someone to love / And you’ve almost given up / Hold ’em tight despite the way they make you mad / ’Cause you might not even know that you don’t have it so bad”

How Did Kacey Meet Ruston?

As is the case with so many love stories, Musgraves and Kelly almost didn’t meet. One night back in March 2016, the Grammy winner went to the Bluebird Cafe, a famous establishment in Nashville where countless songwriters and musicians have gotten their start in country. Musgraves admitted that she never goes there, as it’s far from home and too touristy, but she had a friend taking to the stage, so she made an exception. Kelly was performing as well, and apparently her appreciation of his art, if not of his looks, was instantaneous.

“Ruston played his first song, and I was just stunned by everything in it — the words, the melody, what he was saying. I was just sitting at this table, crying,” Musgraves shared. “When it was over, I went up and introduced myself. I said, ‘Hey, I don’t really ever do this, but here’s my number; I really wanna write with you.'"

Musgraves told HitsDailyDouble that after a few months, the two had a songwriting date, and the country musician almost canceled, but once Kelly arrived, it all went beautifully. “The second Ruston walked into my house, I felt like Dorothy when the colorized part happens in The Wizard of Oz,” she said. “We didn’t even write a song. We just talked, and talked, and talked. He didn’t leave until like 3 a.m. It was the easiest, most natural thing in the world, and I didn’t want it to stop.”

Kelly and Musgraves were engaged by the end of 2016.

How Did Kacey & Ruston Fall Apart?

Musgraves began to talk openly about how things went south with her then-husband as the promotional tour for Star-Crossed started. It’s not that she was using the split as a publicity tool, but rather that she was bound to be asked questions about the high-profile separation, and she has been unafraid of sharing some of the details.

After the incredible success she found with her album Golden Hour, which took her career to new heights, Musgraves was in the best period work-wise. She was touring, her music was selling well, and her latest release was adored by critics. Golden Hour won the Album of the Year at the Grammys, making her one of a relatively small group of country acts to claim the prize. While things couldn’t have been going any better musically, personally, Musgraves was having a very difficult time.

In a recent Elle cover story, Musgraves admitted that during that time, she felt like she was “dying inside.” She added that she felt like she was “crumbling ... sad” and “felt lonely” and “broken.” A few months prior, she laid it out for Rolling Stone, sharing that the breakup was, “Nothing more than ... two people who love each other so much, but for so many reasons, it just didn’t work. I mean, seasons change. Our season changed.”

When Did Kacey & Ruston Get Divorced?

Only July 3, 2020, Musgraves and Kelly released a joint statement to the Associated Press announcing they were divorcing. The news shocked the country world, and millions of fans around the globe, as the two seemed to be so in love. The pair shared more information with People via prepared remarks, which stated, in part: “We believe that we were put into each other’s lives for a divine reason and have both changed each other infinitely for the better. The love we have for each other goes far beyond the relationship we’ve shared as husband and wife. It’s a soul connection that can never be erased. We’ve made this painful decision together — a healthy decision that comes after a very long period of trying the best we can. It simply just didn’t work.”