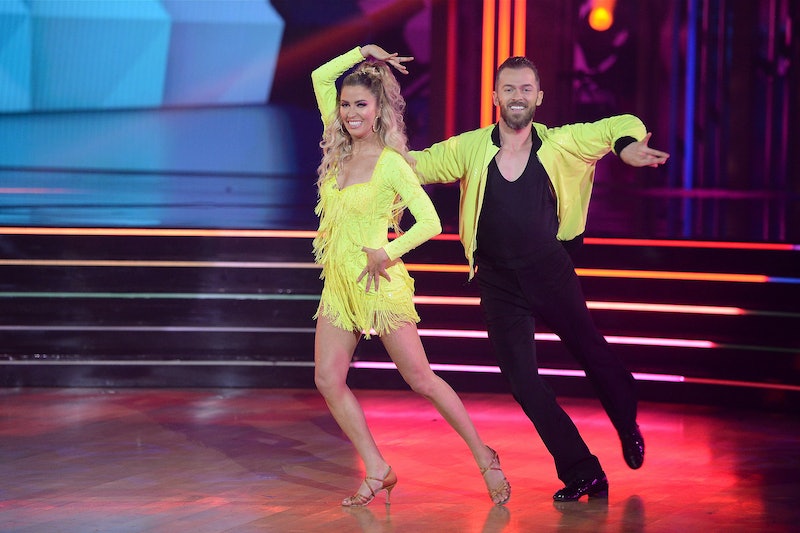 It's only been one week since the new season of Dancing With the Stars premiered, but it seems like some strong bonds have already been formed. Ahead of their second performance on September 21, former Bachelorette Kaitlyn Bristowe praised her DWTS partner Artem Chigvintsev on Instagram, and revealed that she has already come up with the perfect nickname for him. Alongside a goofy photo taken backstage before their debut cha-cha performance, Kaitlyn shared a sincere and touching caption celebrating the pro and giving fans an insight into their new friendship.

"Let me share what I’ve learned about Artem in the last couple of weeks," Kaitlyn wrote on Instagram. "He’s never done ballet but he can pirouette like a mother f*cker, he LOVES his baby and fiancé [Nikki Bella] so so much that his happiness RADIATES in the studio, he’s pretty funny, he’s a great cook, loves his motorcycles, builds stuff, he quotes wedding crashers, he judges me for drinking bad coffee, and he is extremely patient."

She added that "the other pro dancers call him velvet because his moves are so smooth," and that it was that, along with the fact that he's "pretty nit picky in the studio," that inspired her to create "the perfect nickname" for Artem. "Let me introduce you to the #VelvetHammer," Kaitlyn continued, explaining that she chose it because her partner "is smooth but LAYS DOWN THE LAW" during rehearsals.

Kaitlyn concluded her post by encouraging fans to vote for her and Artem — who have decided to call themselves "Team #WillYouAcceptThisDance," as an homage to her Bachelorette past — to continue on in the competition, and teased that they are working on a "very special" foxtrot for their next performance. "Swipe to see how you can vote and help us achieve our goals. Aka that mirrorballllll," she wrote.

Competing on DWTS has been a long-time dream for former dance instructor Kaitlyn; in 2017, she claimed that she had been "offered" the show two years earlier, but was told by Bachelor creator Mike Fleiss that she "wasn't allowed" to compete. "I was told by Mike that it is bad for his brand, and that he is sick of people wanting fame from his show," she said at the time. "I am a dancer and wanted to do it, [my then-fiancé Shawn Booth] wanted me to as well. ... I told Mike it was my passion. I was told Shawn should be my only passion."

However, in a recent interview with TV Insider, Kaitlyn revealed that she's glad she waited to compete on DWTS, as she was "emotionally drained" after filming her season of The Bachelorette. "It wouldn’t have been a good time for me to have done the show," she explained, adding, "I suffered [from] a little depression after [The Bachelorette]." Kaitlyn also said that as upset as she was by Fleiss' reported denial, she now realizes that "it was best to focus on the relationship [with Shawn] and not jump into another TV show right away."

Still, all of those years of waiting means that the pressure is on for Kaitlyn to impress every week in the ballroom. “What I’m the most scared of, I think, is letting people down,” she told reporters in early September, according to Us Magazine. “It’s always my biggest insecurity — disappointing myself or my partner. He’s such a hard worker and so patient with me that I don’t want to let him down."

The first elimination of the Dancing With The Stars season will air on Tuesday, Sept. 22, on ABC.