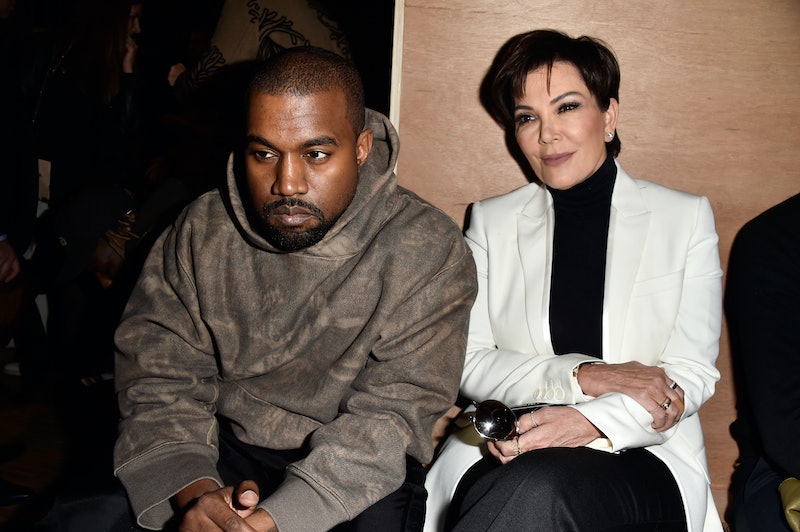 Another day, another headline-grabbing stunt by Kanye West. The Yeezy designer changed his Instagram avatar to a headshot of Kris Jenner, the mother of his ex-wife Kim Kardashian. Ye switched it to the exact same photo that Jenner uses as her Instagram profile photo, causing confusion for fans who follow both of them. Twitter is both stumped and amused by the unexpected move on Sept. 28. West explained his intentions on his Instagram Story, writing in all caps, “I posted Kris with thoughts of peace and respect. Let’s change the narrative.”

Jenner has yet to respond to her former son-in-law’s gesture, but considering recent events, they may not be in the best place right now. On Sept. 2, West slammed Jenner in now-deleted Instagram posts, the first of which concerned his publicized fight with Kardashian about their children’s education. “Kris... Get your motherf*cking popcorn,” he wrote, as reported by BuzzFeed. He went on to accuse Jenner of encouraging her kids, namely Kardashian and Kylie Jenner, to pose for Playboy, and stated he won’t let his daughters North, 9, and Chicago, 4, do the same. “Don’t let Kris make you pose for Playboy like she made [Kylie] and Kim do,” he wrote. “Hollywood is a giant brothel. Pornography destroyed my family. I deal with the addiction, Instagram promotes it.”

Later, West shared a screenshot of a message reportedly from Kardashian that was written on behalf of Jenner. “From my mom- PLEASE, Tell him to please stop mentioning my name,” she wrote to West. “I’m almost 67 years old and I don’t always feel great and this stresses me to no end.” In response, West wrote, “Y’all don’t have so so over my black children and where they go to school. They will not do Playboy and sex tapes. Tell your Clinton friends to come get me. I’m here.”

Previously, on Sept. 22, the Grammy winner apologized to Kardashian for his social media posts during a rare interview on Good Morning America. “This is the mother of my children,” he said. “And I apologize for any stress that I have caused, even in my frustration.” He did not offer the same apologies to Jenner, though his Instagram photo may be his way of doing so.