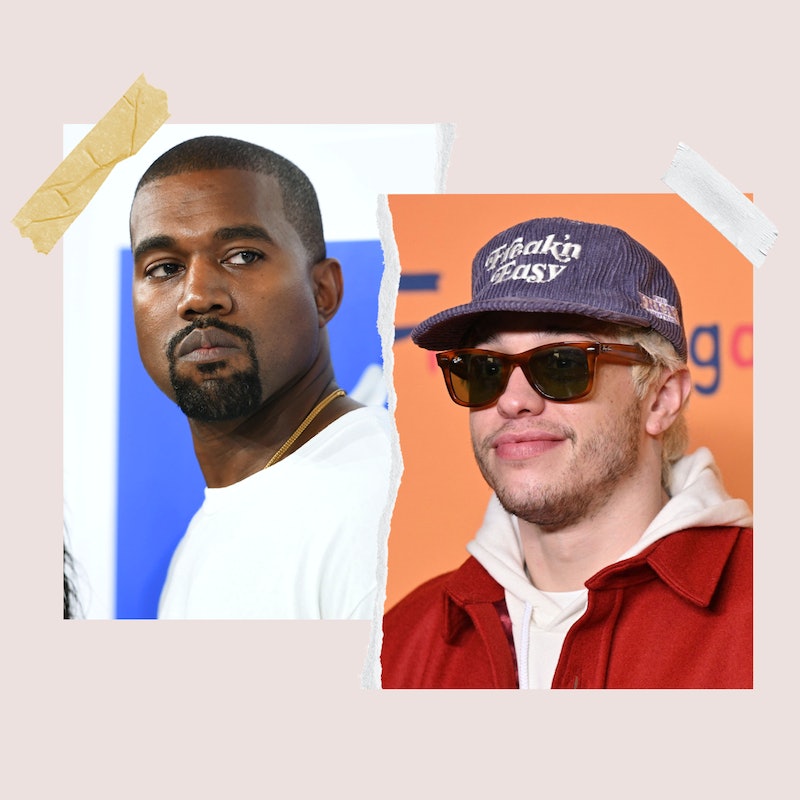 Kris Jenner’s annual Christmas party was canceled last year because of the COVID-19 pandemic, but this year it’s back and potentially more awkward than ever. A source told E! that Jenner has invited both Kanye West and Pete Davidson to this year’s bash, which means that Kim Kardashian’s ex-husband and reported current boyfriend will likely be in the same room, chatting with the same A-list celebrity guests, and chowing down on the same hors d’oevres.

According to the insider, Kim is “really excited” to have the Saturday Night Live comedian around for Christmas. “Kris is already obsessed with him,” the source told the outlet. “The whole family is a fan of Pete’s and would love to spend a holiday with him.” That same insider revealed that the rapper was also invited and that “there is a possibility they will both be there.” However, a source told The Sun that Davidson is “reluctant to go and nervous because he knows how much the family loves Kanye.”

If both of them do show up, things could get pretty uncomfortable. In recent weeks, the “Come to Life” musician has publicly pleaded to reconcile with the Skims founder. “All I think about every day is how to get my family back together and how I heal the pain that I’ve caused,” he said in a five-minute Thanksgiving prayer on Instagram last month. He also said that he takes “accountability” for the actions that led to their February split.

In a separate speech at the Los Angeles Mission’s Annual Thanksgiving Event on Nov. 24, West told the crowd that he “[needs] to be back home” and “next to [his] children as much as possible.” He added that his eventual reconciliation with the reality star will also inspire other couples to mend their broken marriages. “When God brings Kimye together, there’s going to be millions of families that are going to be influenced to see that they can overcome the work of the separation,” he said.

Unfortunately, Kardashian doesn’t seem to be on the same page. The KKW Beauty founder has been spotted out with the King of Staten Island star on many occasions since hosting SNL on Oct. 9. And after a visit to Knott’s Berry Farm, several date nights in New York City, and a rooftop dinner in Davidson’s hometown, a source told Entertainment tonight on Nov. 8 that they are “casually dating and seeing where things go.”

Since then, it seems that their relationship has only been heating up. Last month, the Keeping Up With the Kardashians star reportedly threw the comedian a birthday party. Roughly one week later, on Nov. 21, the duo appeared to enjoy a romantic date night at Giorgio Baldi in Santa Monica, California. Outside the Italian restaurant, Davidson was photographed with a hickey on his neck.

Although Kardashian and Davidson haven’t addressed their reported romance, they appear to be going strong. On Dec. 18, the pair reportedly hit up a Staten Island movie theater for a screening of Spider-Man: No Way Home. Days later, Daily Mail reported that the comedian walked out of Kardashian’s hotel in New York with “an extra pep in his step” after reportedly “spending the night.” Kardashian was also spotted exiting Davidson’s Staten Island condo, proving that they’ve been spending a lot of time together.

If that’s not enough proof that the KUWTK star has moved on from West, she recently filed new court documents requesting to expedite the divorce process. “[Kardashian] has been attempting to settle this manner since she filed her Petition for Dissolution of Marriage in February 2021,” the documents state, according to People. “[Kardashian] and her counsel have reached out to [West] and his counsel several times in an attempt to move this case forward to a speedy and amicable resolution. [West] has been non-responsive.”

Well, Christmas should be interesting.

More like this
Everything You Need To Know About Kanye's Post-Kardashian Dating Life
By Bustle Editors
Did Pete Davidson Remove His Kim Kardashian Tattoos? Photos Point To Yes
By Alyssa Lapid
Taylor Lautner Thought Taylor Swift's 2009 VMAs Interruption Was A "Skit"
By Alyssa Lapid
North West Will Make Her Acting Debut Alongside Mom Kim Kardashian
By Radhika Menon
Get Even More From Bustle — Sign Up For The Newsletter
From hair trends to relationship advice, our daily newsletter has everything you need to sound like a person who’s on TikTok, even if you aren’t.