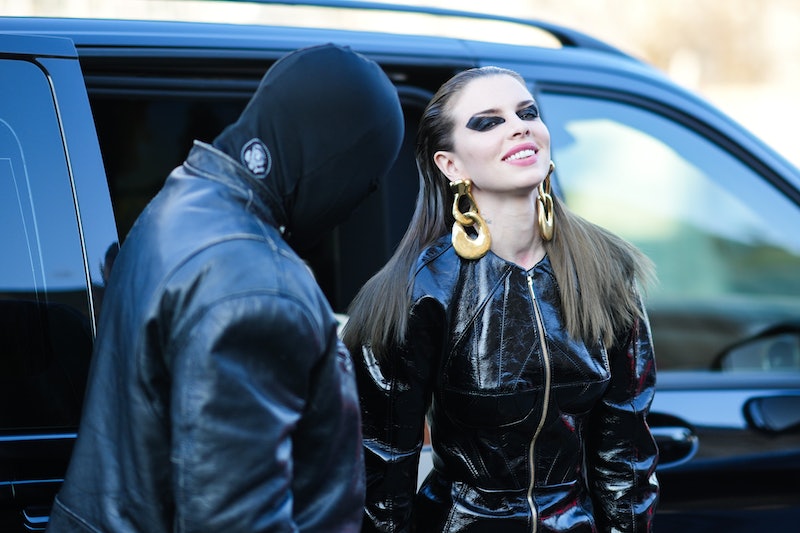 After several days of reports that Kanye West and Julia Fox’s romance was no more, things are, in fact, over. The Uncut Gems star took to her Instagram on Valentine’s Day to not only confirm they have ended their open relationship, but also to insist the breakup is not a big deal. “Y’all would love if I was soooo upset,” Fox wrote on her Instagram story. “The media would love to paint a picture of me a sad lonely woman crying on a plane by myself but it’s not true!!”

Fox is referring to an article published by the Daily Mail titled, “It’s all over for Kanye West and Julia Fox! Tearful actress jets out of LAX alone after liking his ex Kim Kardashian’s Instagram post and deleting all photos of the rapper.” Fox claims that she hadn’t shed a tear, and that she wouldn’t do so for the rapper. In an earlier Instagram story that Fox later took down, she had written, “Y’all are straight trash, I haven’t cried since 1997 and I especially wouldn’t cry over THIS!!”

In her Feb. 14 statement, Fox said there’s no bad blood between her and the Donda star. “Kanye and I are on good terms,” she continued. “I have love for him but I wasn’t in love w the man Jesus Christ what do u guys think I am 12 years old?!”

In the days leading up to her statement, signs surfaced indicating West and Fox’s relationship wasn’t going well. Fox wiped all images with the current Grammy nominee from her social media, while West has been busy pining for his soon-to-be ex-wife, Kim Kardashian.

After sparring with Kardashian throughout February on their respective Instagram profiles, which are followed by nearly 300 million people, West has lately been focused on his mission to reunite with the reality star. The hip-hop powerhouse deleted all traces of animosity toward Kardashian, and now the oldest post on his page is a collage of pictures with Kim and the kids captioned, “GOD PLEASE BRING OUR FAMILY BACK TOGETHER.”

Since West and Kardashian split in February 2021, the rapper has alternated between dating other women, begging his wife to put his family back together, and calling her out for what he sees as lapses in her parenting and various “offenses.” This is all in addition to Ye attacking Kim K’s current boyfriend Pete Davidson in his music.

Ye’s two newest Instagram posts, published on Feb. 14, are about his family, with the latest one captioned with: “THANK YOU GUYS FOR YOUR SUPPORT OF MY FAMILY MY FAMILY MEANS MORE TO ME THAN ANY OTHER ACCOMPLISHMENT IN LIFE IF ANYONE LOVES ME AND MY FAMILY IF YOU SEE SKETE IN REAL LIFE SCREAM AT YHE LOOSER AT THE TOP OF YOUR LUNGS AND SAY KIMYE FOREVER 💔” The post itself features screenshots of comments from fans who are rooting for him and hoping he wins Kardashian back.

In the other Valentine’s Day Instagram post, Ye wrote: “I DON’T HAVE BEEF WITH KIM I LOVE MY FAMILY SO STOP THAT NARRATIVE IM NOT GIVING UP ON MY FAMILY I BOUGHT THIS COAT FOR KIM BEFORE SNL I THOUGHT IT WAS PARTICULARLY SPECIAL I HAVE FAITH THAT WE‘LL BE BACK TOGETHER I NEVER HAD ANYTHING AGAINST DAILYMAIL I GOT LOVE FOR EVERYONE IN THE MEDIA AND I WISH YOU ALL THE HAPPINESS IN THE WORLD I SPEAK DIRECTLY TO THE MEDIA OUTLETS THE SAME WAY A BALL PLAYER SPEAKS TO THE REFS THE WORLD IS OUR COURT LIKE A BASKETBALL COURT AND THE COURT OF PUBLIC OPINION WE HAVE A PUBLIC RELATIONSHIP BECAUSE WE ARE PUBLIC FIGURES SO TO THE PUBLIC AND TO THE PRESS SOMETIMES PEOPLE CALL ME CRAZY BUT TO BE IN LOVE IS TO BE CRAZY ABOUT SOMETHING AND I AM CRAZY ABOUT MY FAMILY HAPPY VALENTINES.”

At the end of Fox’s IG story statement (which has since been taken down), Fox poked fun at those who want more juicy gossip about her and Kanye’s romance. “Anyway if u want the full tea ur gonna have to buy the book when it comes out,” she wrote to end her statement. The comment may have been a complete joke, but she could potentially make some cash out of such a deal. Should the actor find a publisher who would be willing to rush a printing of the whirlwind romance, she could conceivably make big money.

More like this
Did BTS Break Up? Members Explain Their Hiatus & Promise To “Return Someday”
By Alyssa Lapid
Big Freedia Reveals The Real Meaning Of Beyoncé’s “Break My Soul”
By Radhika Menon
Will Beyoncé Be At The BET Awards To Perform “Break My Soul” Or Attend The Show?
By Jake Viswanath
Kim Kardashian Father’s Day Tribute To Kanye West Called Him “The Best Dad”
By Stephanie Topacio Long
Get Even More From Bustle — Sign Up For The Newsletter