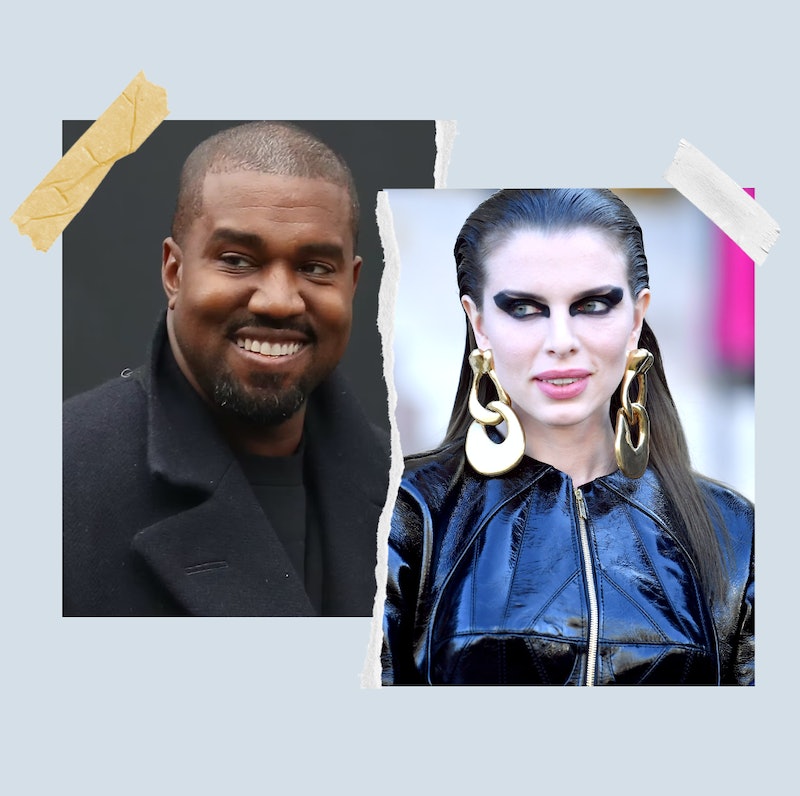 January 2022 marked a full year since rumors started swirling about Kanye West and Kim Kardashian’s breakup after six years of marriage, with the Skims founder filing initial divorce paperwork a month later in February 2021. Since then, both West and Kardashian have been romantically linked to other people. Kardashian has been connected to SNL star Pete Davidson, while West has been busy spending time with several women, including his current love interest Julia Fox. A new photo of “JulYe,” posted on Jan. 28, shows them French kissing in Paris.

It’s not surprising to see two adults who are going through a complicated divorce process seek out comfort and new love in others, but while Kardashian is set on continuing with the legal proceedings, West has expressed interest in fixing their broken relationship and continuing their marriage. West has been vocal about how much he is still in love with her — even going so far as to become her neighbor. However, West appears to be sending mixed messages by simultaneously dating others amid his confessions of love for Kardashian.

“All I think about every day is how to get my family back together and how I heal the pain that I’ve caused,” the 22-time Grammy winner said in a five-minute Thanksgiving prayer on Instagram. He also said that he takes “accountability” for the actions that led to his early 2021 split, admitting that he “embarrassed” Kardashian when he tried to transition from music to politics. “Being a good wife, she just wanted to protect me and our family,” he said.

Here is a look at all the women West has been romantically attached to since their breakup.

West spent the beginning of 2022 with actor Julia Fox, who notably appeared in Uncut Gems alongside Adam Sandler. But according to Page Six, the two are in an open relationship. An insider told the outlet that “their bond transcends typical norms because they’re evolved beings who just want each other to be happy.” The source added that there is “no jealousy or bad vibes.”

Per Page Six’s source, Fox is currently “talking to” someone on the East Coast, and West was recently spotted with Kim Kardashian lookalike Chaney Jones. But even though they’re not exclusive, Fox said on the Feb. 8 episode of the “Call Her Daddy” podcast that “she calls him [her] boyfriend and he calls [her] his girlfriend.” She also described their relationship as “natural” and “organic.”

“Obviously it looks a certain way, but people don’t know the conversations happening behind the scenes, and you know, I’ve been around,” Fox explained before addressing West’s comments late last year about wanting to rekindle his romance with the Skims founder. “I’m sure there’s still some residual feelings and that’s normal. It’s human,” she said. “I also know that he’s with me now and that’s all that matters.”

Despite being in an open relationship, Fox and West haven’t shied away from public displays of affection. On Jan. 28, after many dates throughout the month, “JulYe” showed some PDA in Paris. Photographer Danielle Levitt posted a steamy snap of the pair French kissing. The photo was one in a series from a celeb-filled party the two attended to wrap up their busy January.

Earlier in the month, TMZ photographed West and Fox walking into Carbone restaurant in Miami on Jan. 1 before enjoying a candlelight dinner together. Three days later, they hung out again in New York City at Broadway’s August Wilson Theatre to see Slave Play, and then a source told PEOPLE that they had dinner at Carbone.

After the pair’s second outing, fans began wondering if West and Fox are in a relationship, casually dating, or just friends who ate a meal together. But any and all questions were soon answered by Fox, who penned a brief essay about the hangout for Interview magazine titled “Date Night,” which was published Jan. 6 alongside photos from the romantic evening. “I met Ye in Miami on New Year’s Eve and it was an instant connection. His energy is so fun to be around. He had me and my friends laughing, dancing, and smiling all night,” wrote the actor. “We decided to keep the energy going and fly back to New York City to see Slave Play.”

Detailing the evening, Fox said she was “impressed” by West’s punctuality for the 7:00 p.m. Broadway show, considering his flight to New York had only landed an hour prior. “After the play we chose to do dinner at Carbone which is one of my favorite restaurants. Obviously,” she continued, seemingly referencing the pair’s multiple January visits to the famed Italian dining spot. “At the restaurant, Ye directed an entire photo shoot for me while people dined! The whole restaurant loved it and cheered us on while it was happening.”

After wrapping up their meal, which was attended by Slave Play writer Jeremy O. Harris, Fox detailed her “shock” over hearing West had a “surprise” for her: “an entire hotel suite full of clothes.” “It was every girl’s dream come true. It felt like a real Cinderella moment. I don’t know how he did it, or how he got all of it there in time,” she detailed. “But I was so surprised. Like, who does things like this on a second date? Or any date! Everything with us has been so organic.” Finally, she let readers know the exact state of her and West’s bond: “I don’t know where things are headed but if this is any indication of the future I’m loving the ride.”

On Jan. 13, a Ye-focused Twitter account (@DondaTimes) shared a video of the rapper hanging out with Fox, but it wasn’t just the two of them. Queen of pop Madonna was also in the house, vibing to the music and hanging off of another woman. Former professional boxer Floyd Mayweather was also in attendance at the star-studded chill session. The account also published several snaps of Ye and Fox looking cozy together.

Fast forward to Jan. 23, when the rumored pair stepped out in matching denim-on-denim for Paris Fashion Week. Their coordinated outfits served as inspiration for a variety of memes, including several that compared their look to Britney Spears and Justin Timberlake circa 2001.

Inevitably, West and Fox’s recent outings have many people skeptical about their rumored relationship and the motivation behind it. But on the latest episode of the actor’s podcast, Forbidden Fruits, she insisted that she’s not with the rapper “for the money.”

In late December 2021, West spent time with Instagram influencer and model Yasmine Lopez. She shared a short video of her with the hip-hop powerhouse at J Mulan’s birthday party in Houston. While some media outlets were quick to label the two as an item, it doesn’t appear they were actually dating, though they may have been romantically linked for a short time at some point. “Sources connected to Kanye and Yasmine tell TMZ they're not dating,” TMZ reported.

According to Page Six, West is no longer dating model Vinetria, who he was reportedly seeing “for a while” when the outlet broke the news of their relationship in November. The news of their split came after reports that they attended the inaugural basketball game at West’s Donda Academy in Minneapolis. Around the same time, as reports surfaced about Kardashian’s relationship with Davidson, West had made it known that he wants to reconcile with Kardashian, which could be one reason why his romance with Vinetria ultimately didn’t work out.

Before Vinetria, West reportedly dated model Irina Shayk. However, sources told PEOPLE that their relationship fizzled in August, with one adding that “it was never a serious thing that took off.” Meanwhile, another insider told Us Weekly, “They never really started, there’s nothing going on there.” The two have known each other for more than a decade, as West notably featured Shayk in his 2010 music video for “Power.” That same year, he name-dropped her in a track called “Christian Dior Denim Flow,” rapping “I wanna see Irina Shayk next to Doutzen.”

Anonymous tip Instagram account DeuxMoi had sparked the dating speculation on May 24. After the account shared a tip they received that the two were an item, a second source reportedly slid into DeuxMoi’s DMs to clarify that while West may have tried “courting” the model, they were just friends. The situation got a little stickier when a third person messaged DeuxMoi to say that they were “definitely dating.” Still, it remained unclear what, if anything, was going on between them. Bustle reached out to West and Shayk’s reps for comment.

Shayk had been single ever since calling it quits with actor Bradley Cooper in 2019. They were together for roughly four years and co-parent a young daughter. While it doesn’t sound like West and Shayk ever got very serious, it started to seem like West was ready to find love again.

In June, the rumors continued when the Daily Mail published photos of them in France at the boutique hotel Villa La Coste around West’s 44th birthday. It was “a great trip,” said a source to PEOPLE, who claimed that they planned to date long-distance. By mid-July, the outlet quoted an insider as saying Kardashian was “fine with Kanye dating” others.

Shortly after the news of West and Kardashian’s divorce broke, (now-debunked) rumors of the Yeezus rapper’s next fling began swirling. Like most viral whispers these days, this one started on social media, with a TikTok posted by user Ava Louise (@realavalouiise). She posted a video to her profile on January 2021, saying: “Now that Kim’s finally doing this, I can spill the tea that I’ve been holding onto for months. This whole divorce comes as no surprise. Kanye’s been hooking up with a very famous beauty guru — male beauty guru. A lot of people in the scene have known for a while”

The rumors were false, but that didn’t stop TikTokers from building on the theory, including @pattypopculture, who alleged the unnamed paramour is YouTube makeup guru Jeffree Star.

He reiterated Louise’s claims, adding that Star bought a house in Wyoming in August 2020 (West also has a ranch there). He alleged that the two were living in the same gated community.

READ NEXT: How Wyoming Became A Secret Celebrity Hotspot

Fueling the rumors, Star posted posted a selfie in January 2021 to Twitter with the caption, “I’m ready for Sunday Service.” Star’s tweet wasn’t the last time he addressed the topic. He later posted a 23-minute-long video to YouTube in which he debunked the allegation and called it “the dumbest sh*t I’ve ever read in my entire life.” He expressed confusion at the connection between himself and the rapper, asking, “How would that even be made up? Because we both live in the same state? Whatever.” He then concluded, saying, “Let me just say this one time for any news outlet: I like very tall men, me and Kanye have never hung out, and this whole thing is really funny.”