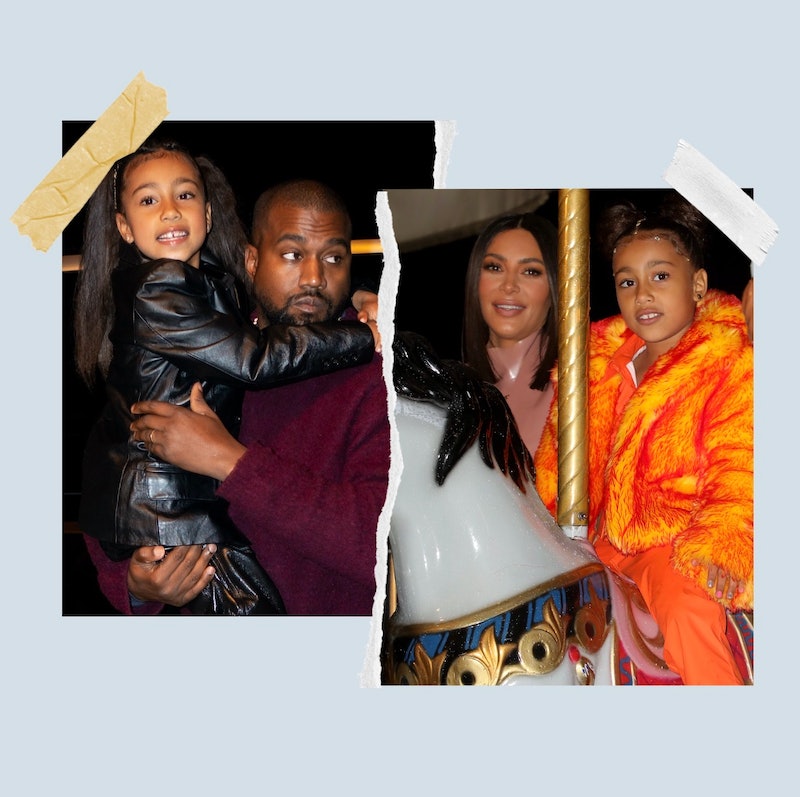 When it comes to sensitive topics regarding kids and divorce, most people keep the details to themselves and their close circle of loved ones. Ye (formerly known as Kanye) West is not most people, and he has no qualms with being very public about his parenting concerns and the issues he’s facing with his soon-to-be ex-wife Kim Kardashian. For several days starting on Feb. 4, he and his former love fought publicly about their 8-year-old daughter North’s presence on TikTok, using Instagram as their platform of choice to communicate their feelings.

Fans, particularly in Ye’s Instagram comments, begged the parents to handle all of this privately, and on Feb. 7, West seemingly heeded the advice and deleted all trace of his spat with Kardashian from Instagram. He also notably doesn’t follow anyone in the Kardashian-Jenner family on Instagram or Twitter, as Ye unfollowed them when his and Kim K’s divorce drama began in 2021.

West posted his first of the now-deleted Instagram posts on Feb. 4 — a photo of North with a caption asking fans a parenting question that attracted a lot of comments from some of his 10.6 million followers as well a thorough response from North’s mom. The 22-time Grammy winner captioned that image, a screenshot of North on TikTok, with: “SINCE THIS IS MY FIRST DIVORCE I NEED TO KNOW WHAT I SHOULD DO ABOUT MY DAUGHTER BEING PUT ON TIK TOK AGAINST MY WILL?” The picture was taken from the TikTok account North shares with her mom. The @KimAndNorth account, which has comments disabled, had 5.5 million followers and 60 million likes when Ye posted the screenshot.

Kardashian quickly responded on Feb. 4 via her Instagram story. “Kanye’s constant attacks on me in interviews and on social media is actually more hurtful than any TikTok North might create,” she wrote. “As the parent who is the main provider and caregiver four our children, I am doing my best to protect our daughter while also allowing her to express her creativity in the medium that she wishes with adult supervision — because it brings her happiness.”

“Divorce is difficult enough on our children and Kanye’s obsession with trying to control and manipulate our situation so negatively and publicly is only causing further pain for all,” the 41-year-old mother added. “From the beginning I have wanted nothing but a healthy and supportive co-parenting relationship because it is what is best for our children and it saddens me that Kanye continues to make it impossible every step of the way. I wish to handle all matters regarding our children privately and hopefully he can finally respond to the third attorney he has had in the last year to resolve any issues amicably.”

Just hours after Kardashian took to her Instagram story to reply to her estranged husband’s very-public questioning, Ye responded to that response. The rapper posted another screenshot (which is now deleted) of her statement on his Instagram and captioned it with the following comment: “What do you mean by main provider ? America saw you try to kid nap my daughter on her birthday by not providing the address You put security on me inside of the house to play with my son then accused me of stealing I had to take a drug test after Chicago’s party cause you accused me of being on drugs Tracy Romulus stop manipulating Kim to be this way…”

Ye, 44, is upset that his child is on an app that puts her in front of millions, and this isn’t the first time he’s mentioned how much he doesn’t like it. In an interview with Hollywood Unlocked, the hip-hop powerhouse stated, “My children ain’t going to be on TikTok without my permission.”

TikTok’s safety protocols seem to suggest that North’s presence on the app might be questionable. TikTok’s website reads, “In the US, if you’re under 13 years old, you’ll be placed into our TikTok for Younger Users experience which has additional privacy and safety protections designed specifically for this audience.” TikTok adds, “If we learn that a person under the age of 13 is using or posting content on TikTok without using TikTok for Younger Users, they will be removed.”

West and Kardashian are in the middle of a divorce, one that was initiated a year ago. The reality TV star and beauty mogul filed to separate from her husband in February 2021. The pair share four children together: North, Saint (6), Chicago (4) and Psalm (2).

These are two of @KimAndNorth’s most-viewed TikToks:

Some of their posts are as simple as this, telling followers they’re going to In-N-Out:

Since Kardashian began divorce proceedings, things have not exactly been going smoothly. The rapper has made it clear many times, and in very public ways, that he wishes to reunite with Kardashian, even going so far as to say he wants to “save my family and keep my family together” in a Drink Champs interview in November 2021.

While West may have made comments about getting back together with Kardashian and that his ultimate goal is to see his family remain intact, he is also currently dating another woman. After being romantically connected to several women, including Yasmine Lopez, Vinetria, and Bradley Cooper’s ex Irina Shayk, he has been seeing actor Julia Fox since the beginning of 2022. While most of the other assumed attachments were largely based off of rumors or one or two paparazzi shots, he and Fox have been snapped eating dinners, traveling the world, and even French kissing.