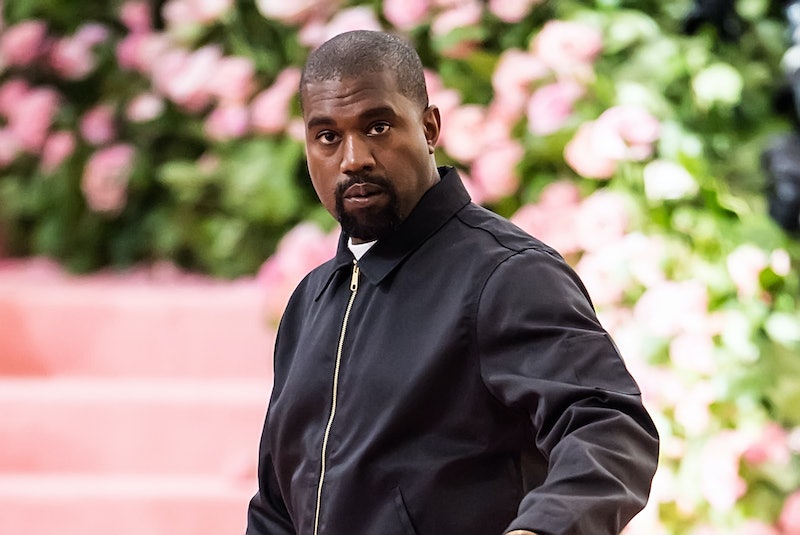 Kanye West is officially one step closer to the White House. The Oklahoma State Election Board confirmed in a July 15 tweet that Kanye West has filed paperwork to run for president — and just in time. More specifically, he's running as an Independent in Oklahoma and has "qualified for the General Election ballot" in the state. A spokesperson for the state's election board also confirmed to People that a representative for West filed the paperwork on Wednesday, the final day for candidates to file in the state.

This means that West also paid the required filing fee of $35,000 and submitted a statement of candidacy. According to People, someone wrote "DONDA'S PLACE" at the top of his statement of candidacy. West's late mother, Donda West was born in Oklahoma. People reported that West also filed a statement of organization with the Federal Election Commission (FEC). An FEC spokesperson told People that the 43-year-old rapper must file a form with the FEC "within 15 days of raising or spending more than $5,000 in federal campaign activity." The form was reportedly submitted by Andre Bodiford, who is listed as the treasurer of the committee. It's unclear what his ties to West are, or if West himself is in fact behind this paperwork, as noted by Vulture.

All of this news comes after reports on July 15 that the rapper dropped out of the 2020 presidential race. Steve Kramer, who's firm works to help potential presidential candidates get on state ballots, told New York Magazine's Intelligencer that West was "out" of the running. He claimed to have been hired for West's campaign, and told the outlet that all campaign staff initial hired for West's 2020 race had been fired. (Bustle previously reached out to West's representatives for confirmation, but did not receive an immediate response.)

All of this back and forth comes barely 10 days after West announced he was running for president. In true West fashion, the rapper launched his campaign on Twitter, celebrating July 4. "We must now realize the promise of America by trusting God, unifying our vision and building our future," he tweeted. "I am running for president of the United States! #2020VISION." Now that he's actually filed paperwork to be eligible to get on the ballot, it looks like his "2020 VISION" is shaping up. All that's left for fans is just to wait and see if he follows through.

More like this
Taylor Lautner Thought Taylor Swift's 2009 VMAs Interruption Was A "Skit"
By Alyssa Lapid
Everything You Need To Know About Kanye's Post-Kardashian Dating Life
By Bustle Editors
Matt Hancock’s TikTok Is The Most Matt Hancock Thing Ever
By Sam Ramsden
Eurovision Has Been Given A Whole New Look Ahead Of Its Liverpool Debut
By Bustle UK
Get Even More From Bustle — Sign Up For The Newsletter
From hair trends to relationship advice, our daily newsletter has everything you need to sound like a person who’s on TikTok, even if you aren’t.