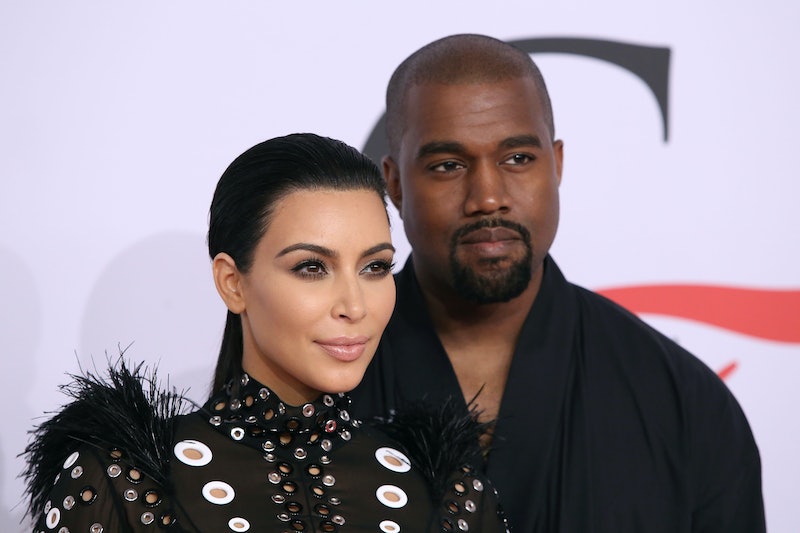 Is it really over for Kim Kardashian and Kanye West? Perhaps not. According to Entertainment Tonight, the former couple might be reconciling roughly six months after the Skims founder filed for divorce. “Kanye wants to get back with Kim and he has been trying to win her over again and reprove himself,” an insider told the outlet. Bustle has reached out to Kim and Kanye’s reps for comment and will update this story accordingly.

Per ET’s source, “Kim and Kanye have a deep love for each other and many amazing memories and it’s difficult to just let that all go.” The couple was married for seven years and share four kids — North, 8, Saint, 5, Chicago, 3, and Psalm, 2. “Kim’s main focus and concern are her children and doing what is best for them and their family,” the insider continued, adding that the KKW Beauty founder is “considering her options.”

“She is open to seeing where things go with Kanye and to see if they can work through their issues as a couple,” ET’s source added. “Regardless of what happens, Kim and Kanye plan to co-parent in a healthy way and will always maintain a supportive relationship.” This seems especially true amid the release of Kanye’s latest album, Donda. After the album came out on Aug. 29, Kardashian shared screenshots of her favorite tracks on her Instagram Stories.

Earlier this month, West debuted a new track from the album at one of his listening parties. In a song titled “Lord I Need You,” he suggests that Kim is “still in love” with him despite their recent split. “Time and space is a luxury / But you came here to show that you’re still in love with me,” he raps on the track, seemingly referencing the fact that Kim showed up at all of the listening parties ahead of the album’s release.

That wasn’t the only lyric that hinted at their relationship and the family they built together. According to Marie Claire, the rapper reportedly previewed the track “Love Unconditionally” at his first listening party, which included a lyric about losing his family. At the second album listening party, he reportedly tweaked the lyrics. “I’m losing all my family,” he rapped. “Darling, come back to me.”

The former couple kicked things up several notches at West’s final Donda listening party on Aug. 26 when the 40-year-old reality star walked onto Chicago’s Soldier Field in a wedding gown. “Wait wait wait. So as part of promotional content for Donda, Kanye West got Kim Kardashian to... *checks notes*... reenact her wedding vows to him?” one person tweeted. “His ex-wife? Have I got that right?” Other fans called the stunt “dramatic” and “bizarre.”

Although it was shocking to see Kim in a wedding dress, she’s made it clear that she and Kanye are on good terms. During a recent appearance on the We Are Supported By… podcast, Kim said that being married to someone who didn’t care about public perception “as long as he was true to himself” taught her “so much in the best way. “You don’t have to please everyone,” she said. “As long as I’m myself, and as long as I’m doing it the way that I want to do, like you have one life and you’re living it for you—that taught me to just, I think, be more confident in myself, and truly not care as much of what other people thought.”