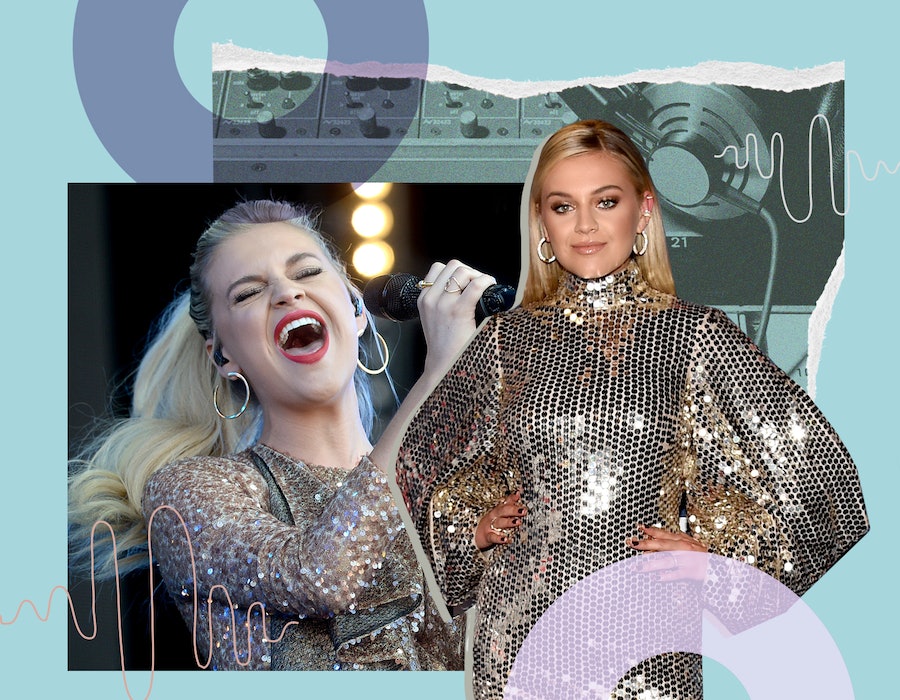 Kelsea Ballerini briefly broke up with music. The country singer's third album kelsea was released just as the world went into lockdown in March 2020, preventing her from touring and sharing her new music in-person with fans. “Music for me was a sad place for several months to follow,” the 28-year-old tells Bustle. “But I could still write.” So she and her dog Dibs headed to a secluded cabin 30 minutes from her hometown of Knoxville, Tennessee, where she put pen to paper and sobbed.

What she wrote turned into Feel Your Way Through, Ballerini’s first anthology of autobiographical poems — and ultimately her catharsis. In the book, released Nov. 16, Ballerini lays claim to her life in verse over 52 poems. Though Ballerini is no stranger to showing vulnerability in her music — her 2015 debut album The First Time broke country music records doing just that — sans melody, Ballerini’s feelings are even more unfiltered. She discovers her unlikely Enneagram (“The Peacemaker”), yearns for a sibling (“If I Had A Sister”), battles an eating disorder (“Kangaroo”), and reflects on witnessing a tragic school shooting (“His Name Was Ryan”).

“What a freeing thing to do to [release] things that I’ve kept close to the chest because I thought being a role model meant being glittery all the time,” Ballerini says of publishing her messy coming-of-age anecdotes punctuated with swear words. “What I care about is being up front and honest and human.”

Below, Ballerini discusses her foray into poetry, fangirling over Kelly Clarkson, and more.

You’ve been writing songs for years. Why the pivot to poetry?

The biggest difference is, even on the most vulnerable and honest of songs, there’s probably a co-writer with you, a producer, studio musicians, an engineer, so many other perspectives that get added to your truth. So although it is still your truth, it’s not just your truth. With this book, it’s the first time that it’s just me. While that’s much more exposed and vulnerable, I’m so much more proud of it. There’s nothing to hide behind; there’s no one else to blame.

The poet’s much more honest. Hopefully, it translates into the next record. I just felt a sense of safety in writing this book to tackle things that I didn’t feel safe enough to tackle before. I’m also growing up, and with age comes... I don’t think wisdom is the right word. I would not call myself wise... but experience and a little bit more boldness. I think that’s what this book is.

What’s a poem or line you’re most proud of?

Because I think it’s very true of who I am, I love in “The Peacemaker” how it says:

“My Miss America answer will always be world peace

As I contort my bones to find it

You have a poem called “The Cheerleading Team.” How did trying out for the team make a lasting impression on you?

I did not make [the team]! I did dance a little bit, which is hard to believe now because I’m extremely lanky — it’s quite embarrassing to watch. I danced for 10 years, actually. Then I got very lanky, all the coordination left my body, and I quit.

It wasn’t the day, but it’s the symbolism of the day I didn’t make the team, the day that cleared that year for me and allowed me to find that passion [in music] and that gift.

Yeah, ugh. It was a symbol for me. To me, the cheerleader is the girl that boys like, that’s beautiful, [whose] family is still together, and who doesn’t struggle with her body image. Of course, none of that’s true. Everyone’s human, but it was the symbolism.

Also, in this book, I’m deconstructing what I thought it meant to be a role model. While I’m writing this book, I’m like, “Do I write like I talk ‘cause I curse in real life? Do I write like I’m a Disney princess?” I just fully swung the door open. When I gave the book to my mom, I was just, “Mom, I’m sorry. But also, I’m not!” I just recalibrated what a role model meant to me.

Did any of your songs start out as poetry? And will we spot any of the passages from your book in future albums?

Yes and yes. On my last album, I was in [Los Angeles], which is always a place for me where I need to write because it just brings out big feelings for me. I didn’t have my guitar on this one particular trip, and I was feeling this turmoil of a lot of different things, and I wrote a poem called “LA” that ended up being the closing track on my last album. That was the first time I’d ever written something as a poem and then put melody and music into it later. I love that process.

There’s already been a couple of these [poems] that have turned into songs. One that I feel pretty strongly about that will probably be on the next record is a song called “The Little Things.” I hate love songs. I actually do. I’ve never been good at writing them. I love writing about sad sh*t. But I’m not sad, so I’m trying to just write about how I feel. That one was a nice parallel and a nice dip into love songs for me.

On Twilight & An Almost-First Kiss

What was the song that played at your wedding?

It’s kinda lame. It is... from the Twilight soundtrack. “A Thousand Years,” Christina Perri. I stan, clearly. And my father-daughter dance was to [sings] “The Way You Look Tonight.” It was really sweet. Feels like forever ago.

I was always Team Jacob.

What’s the weirdest thing you’ve written a song or poem about?

Probably my meant-to-be first kiss where I took the top layer of skin off with hot wax.

The poem, “Behind the Monkeys.”

Yeah! It’s a true story. It was so embarrassing. I literally had, like, oozing burns, and my mom wouldn’t let me wear makeup, which I’m like, “You’re rude.” My first kiss didn’t happen that day, but it was very character building.

Do you have a go-to karaoke song, and what kind of karaoke singer are you?

I have a secret. I think if you can sing, you have to pick a song that you can’t sing. So for me, I would never sing a song that I would go up there and actually try to perform. Mine is “Since U Been Gone” by Kelly Clarkson, because the only person that could sing that song is Kelly Clarkson. No one else. Every time. That’s it. I have fangirled over her too much — she can’t know that. I’m gonna get a restraining order at some point. I love her so much. She knows it.

There’s a place in Nashville called Santa’s Pub. It’s a double-wide trailer with Christmas lights year round, and all they do is sell beer and take cash. If I have enough to drink, that’s where I end up.

Do you have a current musical idol?

Is there a genre you wish you made music in?

I’m really happy to be a country artist. I’m also like, “What’s a genre?” I’m a songwriter before I’m an artist. I’m really not scared to let the production of a song be determined by how the song’s written. I have a song on country radio right now and a song on pop radio. That’s where they both need to live, and that’s OK. My roots will always be in country music, but I love being influenced and trying new things.

At what moment in your life did you feel like you really made it as a musician?

I don’t feel like I’ve made it as a musician. I really don’t. I also think the moment you think you’ve made it is the moment you lose your drive and your eagerness, and I don’t wanna ever lose that. I have moments where I’m like, “This is a moment, and will you be proud?” Being inducted into the Grand Ole Opry as the youngest member? That’s a huge one. Getting number ones at radio? That’s a huge one. Headlining a tour? Huge. But there’s a lot more that I wanna do, so I don’t think I’ve made it.