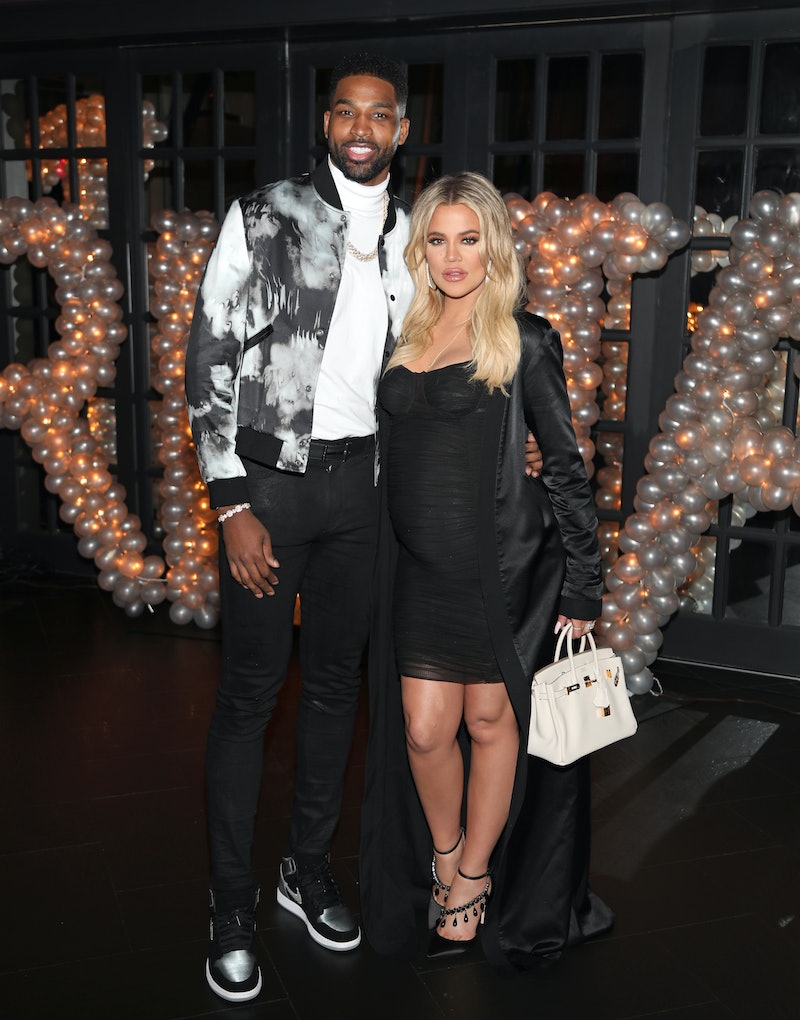 Khloé and Tristan may not have confirmed their relationship status, but they are reportedly acting like a couple once more. After months of rumors that the pair had decided to give their relationship another try, Us Weekly reported that Khloé Kardashian and Tristan Thompson showed plenty of PDA at Kim Kardashian's 40th birthday party. The NBA player accompanied Kardashian to the surprise party, which was shown on the Oct. 21 episode of Keeping Up With the Kardashians, and was filmed kissing her on the cheek in the photo booth.

While it's unclear when exactly the episode was filmed — Kim's birthday is actually Oct. 21 — this is the closest Kardashian and Thompson have come to confirming that they have rekindled their romance. Back in April, Kardashian talked about having another baby with the basketball player on an episode of KUWTK, in order to give their 2-year-old daughter, True, a sibling. "I might get some embryos and get a sibling. I might need to borrow some sperm or get some from you," she told Thompson. "We'll figure that out later. That's a whole other episode."

Though she shut down rumors she was expecting another child with Thompson a month later, in July, sources told People that they decided to "give their relationship another try. Tristan is working hard to prove himself and has been a great dad to True." The Season 19 trailer for KUWTK also seemed to confirm that quarantine had brought Kardashian and Thompson closer, and that they were thinking about getting back together. "One of my fears is you're acting like this until you get what you want and then if you do, you're going to turn into the old Tristan again," she says in the clip.

Though they haven't commented on the reports of their reconciliation, Kardashian has been much more open about co-parenting True with her ex. "My parents were so good at not letting us feel whatever they were going through," she said on Laura Wasser's Divorce Sucks! podcast in February about the importance of having a good relationship with Thompson for her daughter's sake.

"I know her dad is a great person, I know how much he loves her and cares about her so I want him to be there. For me, True is one and a month old so she doesn't really know what's happening," Kardashian continued, referring to the cheating scandal that preceded her split from Tristan in 2019 and their complicated relationship. "But to me, she does know and she feels energy and I'm a big believer of that. So I do everything in my power to not put any heavy energy around her."

According to Us Weekly, spending time as a family with True during quarantine helped Kardashian feel more comfortable rekindling her relationship with Thompson. "Khloé is hopeful that Tristan has changed for good and will continue to grow and be the great and loyal partner that he has been throughout their time together during the [coronavirus] quarantine," a source told the outlet in August. "The fact that Tristan hasn't been working or been able to hang out with his friends and other athletes who have previously been a negative influence on him like he used to has been great for their relationship."

Regardless of whether or not the couple ever publicly comment on their relationship status, Kardashian and Thompson have only good things to say about one another's commitment to True. "I'm wise enough now to know, you came into my life to show me just what it means to be an incredible person," the NBA player wrote on Instagram as a birthday tribute to Kardashian. "I thank God for the beautiful and loving woman you are to everyone, especially our daughter True. You deserve the world Koko! True and I love you mama."