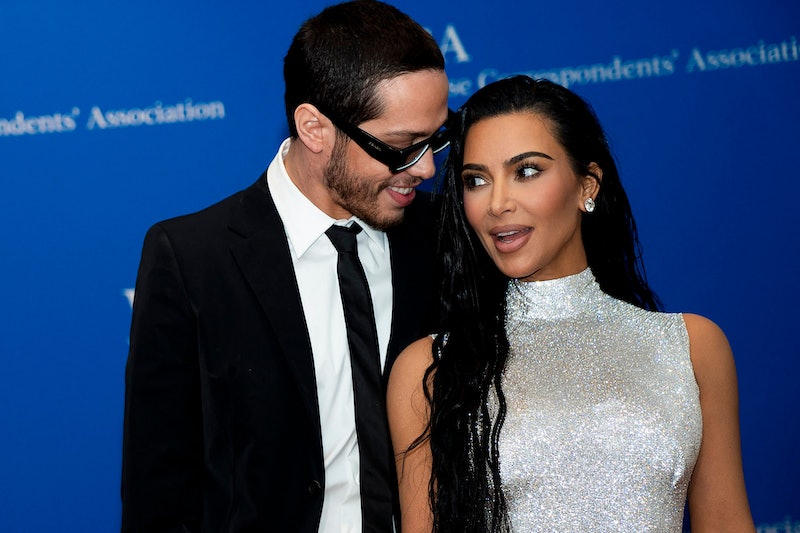 A surprising event prompted the latest Kete relationship milestone: Kim Kardashian and Pete Davidson showed up at the 2022 White House Correspondents’ Dinner on Saturday, April 30 and looked stunning as they walked their first red carpet together. Though he looked dapper in a suit and she was glamorous in a sparkling Balenciaga gown, reactions on Twitter were divided, to say the least. Like their romance itself, their red carpet debut seems to have inspired a love-it-or-hate-it response.

Kardashian showed off her full look on Instagram, which featured the work of hairstylist Chris Appleton and makeup artist Mario Dedivanovic. To complement her eye-catching, curve-hugging gown (the star of the show, frankly), she wore long, loose curls, understated makeup, and minimalist Lorraine Schwartz jewelry. As sister Khloé summed it up in Kardashian’s comments, “What a glamour puss.” Friend La La Anthony also agreed, writing, “I mean……Might be my fav look on u. This is it!!!” alongside numerous heart-eyes emojis.

Davidson, too, looked ready-carpet ready. His black suit, white dress shirt, and skinny black tie fit in at the event, while his black-and-white sneakers gave his outfit a more laidback vibe. It was perfect for a comedian at a political event.

On Twitter, a number of people loved the pair’s red carpet looks, too. One person credited Kardashian with what they see as a new-and-improved version of Davidson. “Kim definitely turned Pete up,” they tweeted. “That man is showering, tanning and wearing tailored suits.” Others couldn’t help but gush about the couple. “They’re just on a different vibe and I love it,” one fan wrote after expressing their hope that Kardashian and Davidson “never end.” Yet another person didn’t know “how or why” the famous couple was at the White House Correspondents’ Dinner, and yet, they had no problem with it.

This Is Not It

Of course, public opinion is often divided, and if there’s one particularly good example of that when it comes to celebrity couples, it’s Kardashian and Davidson. Many people continued to ponder just why the two are dating in the first place. “It’s been months and I’m still trying to figure out what Pete Davidson and Kim Kardashian talk about,” a skeptic wrote. Another described them as “not it.” Yet another person just wanted the many Kete updates to end.

Whatever the public’s thoughts, Kardashian and Davidson seemed to have a good time, and they held hands and appeared to be enjoying each other’s company in photos. And now, with their first red carpet behind them, they’ll be ready for the next. Met Gala, anyone?