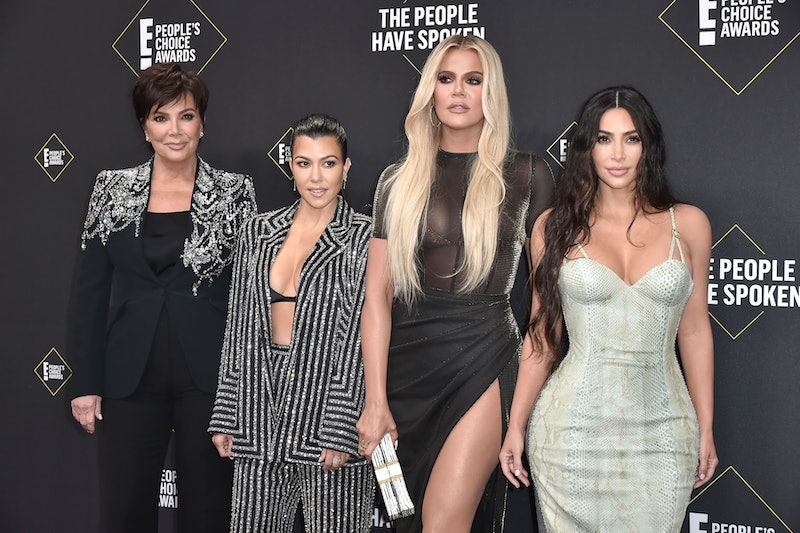 To paraphrase Kourtney Kardashian, ABCDEFG, their time on E! is over. The promo for the final season of Keeping Up With the Kardashians was released on Jan. 28, officially marking the end of an era for the famous family and their reality TV empire. In addition to teasing the possibility of another child for Khloé Kardashian — who has reportedly reunited with ex Tristan Thompson — and the ongoing bond between Kourtney and Scott Disick, the trailer featured the Kardashians looking back at some of the biggest moments in their lives and on the show.

"Filming has been one of the best experiences of my life," Khloé says in voiceover while footage from the past 14 seasons flashes on the screen. "We didn't think anyone would be into watching a show about our crazy family," Kim adds before the promo cuts to her and Kris Jenner tearfully saying goodbye to their crew. "I'm just really blessed that we even had the opportunity to do this," Kylie says in an interview with Kendall. "We have a lot of memories."

Most notably, the promo does not appear to address rumors that Kim Kardashian and Kanye West are divorcing after six years of marriage. While the couple has not publicly confirmed the split, Page Six reported in early January that their "divorce is imminent," with multiple other outlets reporting that Kim was waiting to file until she and Kanye had reached a settlement about their home and children. However, on Jan. 20, an insider told Page Six that the pair was also planning to address the breakup on the final episodes of KUWTK.

"The Kardashians intend to go out with a bang," the source told the outlet. "They've filmed Kim discussing her marriage problems. But everybody involved is on a nondisclosure agreement, because the finale won't screen until later in 2021." It's unclear whether or not Kanye also filmed any scenes for the final season, but it seems unlikely considering he has rarely appeared on KUWTK in the past.

In September 2020, the Kardashians announced that they were ending their long-running reality show after fourteen years and 20 seasons. "It is with heavy hearts that we've made the difficult decision as a family to say goodbye to Keeping Up with the Kardashians," Kim wrote on Instagram at the time before thanking fans for supporting them and the series for so long. "Without Keeping Up with The Kardashians, I wouldn't be where I am today. ... This show made us who we are and I will be forever in debt to everyone who played a role in shaping our careers and changing our lives forever."

Shortly after the announcement, Kris Jenner explained that the family felt it was the "right time" to end the show and that everyone was interested in taking a break from the cameras. "I think for us to take a minute and breathe and everybody slow down a bit. Not slow down professionally, but just you know figure out what our next steps are. We've had such an amazing run and so grateful for every single moment and everyone we work with."

Kim echoed those comments in an interview with Grazia, where she revealed that she and her siblings hadn't had a break from filming in a decade and a half. "Sometimes we just need a break. It's really simple. We just need a minute to regroup," she explained. "We've gone in filming a season, then a spin-off, and I think there’s no other way to say it other than, we just live such big lives ... There's so much going on that, even just for a minute, we need a break."

However, that doesn't mean the Kardashians are done with reality TV forever; in December, the famous family signed a multi-year deal with Hulu to develop "global content" for the streaming service, with their first show set to premiere in late 2021. Details about the shows are scarce, but it seems likely that the Kardashians will once again make "unscripted" content for the platform — and maybe even bring KUWTK back in a new form. "Did we make the right decision by walking away?" Kris asks in the final moments of the promo, leaving the door open for even more opportunities in the future.

In the meantime, fans will have to tune in on March 18 in order to keep up with the famous family — along with their dramas, their triumphs, and their wisecrack remarks — one last time.