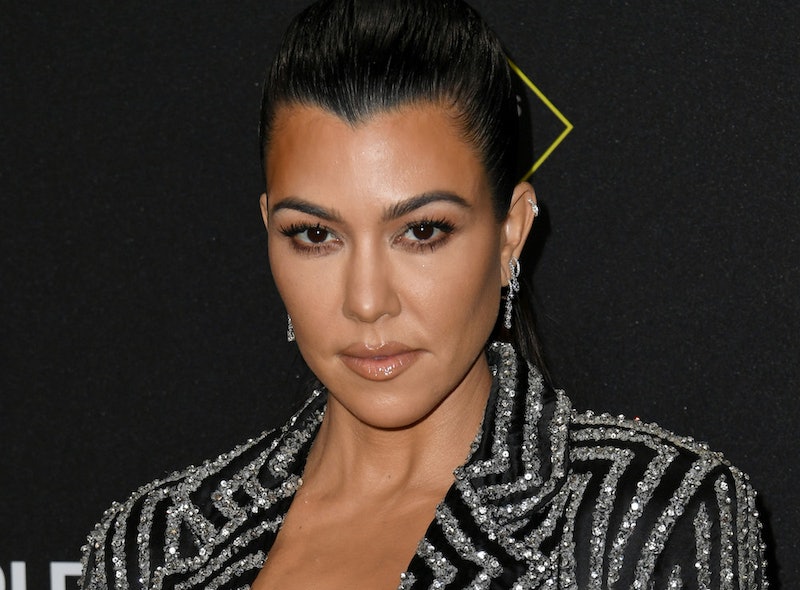 In a move that has drawn ire from the internet, Kourtney Kardashian posted a photo of herself wearing merch promoting Kanye West’s presidential campaign. The reality star shared a series of selfies on her Instagram Story on Thursday, Oct. 15 to promote a recent blog post on her lifestyle website Poosh entitled “Where to Buy the Best Voter Merch.” In them, Kardashian is seen in a “Vote for Kanye” baseball cap and used the “swipe up” feature to link to the merch on West’s official presidential website.

It isn’t clear if Kardashian is explicitly endorsing her brother-in-law for the presidency, but Twitter was quick to condemn the Poosh founder for using her mass platform to advocate for a candidate who would only appear in the ballot in 12 states. Many accused Kardashian of diverting attention from the increasingly contentious race between the two major candidates, Democratic presidential nominee Joe Biden and President Donald Trump.

“kourtney kardashian posting an insta story to her 102 MILLION followers encouraging them to vote for kanye is one of the most irresponsible, egregious and reckless uses of that family’s platform that i’ve ever seen,” one Twitter user wrote, while YouTuber Tyler Oakley similarly called it “embarrassing” on Twitter. Another user tweeted, “alllllll that power and influence only to do.....this.”

West, who has voiced his support for Trump in the past, announced his presidential run in July. Due to certain deadlines, though, West will only appear on the ballot in a few states under the “Birthday Party” affiliation. Up until now, the Kardashians have remained relatively mum about West’s campaign, though a source told People in August that Kim Kardashian wasn’t happy with her husband’s presidential bid. “Kanye has made it clear that he will continue to run for president,” the source said. “Kim is not happy about it, but this isn't her focus.” The source added that “she just wants to do what's best for the kids.” While Kim hasn't publicly endorsed a candidate this election cycle, she endorsed Democratic nominee Hillary Clinton in 2016.

The Poosh backlash comes after West similarly came under fire on Oct. 8 for tweeting out a photo that suggested his friends were writing his name in on their ballots. "I hope people aren't that stupid," one user tweeted, while another wrote, "You are taking votes that [are] needed to stop this insanity... stop interfering in things that will cost lives!"

More like this
Man Meets Politics: ‘Boy Meets World’ Star Ben Savage Is Running For Congress
By Jake Viswanath
Everything You Need To Know About Kanye's Post-Kardashian Dating Life
By Bustle Editors
Britney Spears Shared The Real Reason She Shut Down Her Instagram Account
By Brad Witter
Twitter Is In Awe Of Taylor Swift’s “Lavender Haze” Music Video
By Jake Viswanath
Get Even More From Bustle — Sign Up For The Newsletter
From hair trends to relationship advice, our daily newsletter has everything you need to sound like a person who’s on TikTok, even if you aren’t.