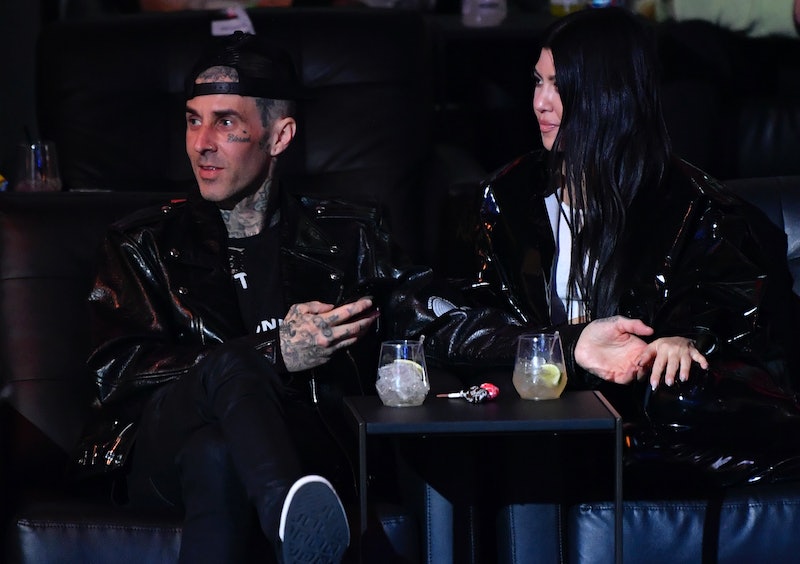 Machine Gun Kelly celebrated turning 31 on Thursday, April 22, and Kourtney Kardashian and Travis Barker joined the party. The musician (real name: Colson Baker) posted some fond memories of his birthday night to his Instagram afterward, including a photo of the couple alongside him and girlfriend Megan Fox. Among the many other friends who turned out in his honor were his drummer Rook, rappers Tyla Yaweh and DubXX, and singer Yungblud, among others.

It appeared to be a fun night for MGK. He showed up wearing white Tickets to My Downfall pants with a silver sweatshirt, and then proceeded to pose with friends, give the camera the finger multiple times, and even film himself singing “F*ck You, Goodbye,” a track from The Kid Laroi album F*ck Love that he features on.

Though Barker had a chance to wish his fellow musician friend a happy birthday in person, he did it in the Instagram post’s comments as well. “HBD,” the Blink-182 drummer wrote. Like Kelly, he decorated his message with emojis, opting for a safety pin, a black heart, a skull and cross bones, and a kitchen knife.

Fox took the time to post her own tribute to her boyfriend. “Happy birthday blonde angel baby,” she wrote on April 22. The actor’s message accompanied a photo of the two of them standing together, each with one arm around the other.

Both couples have been going strong — and made no secret of it. Kardashian and Barker reportedly coupled up in late 2020 after years of friendship. A source told People in late January that their relationship had “turned romantic” and they’d “been dating for about a month or two.” Once they went Instagram official on Valentine’s Day, they apparently decided to embrace public displays of affection. Barker recently tagged his love in a post with a steamy caption, and Kardashian showed off the massive floral arrangement that he got for her birthday on April 17.

Meanwhile, Fox and Kelly also got together in 2020. Relationship rumors began in May, after they began production on their upcoming film Midnight in the Switchgrass. They then went on to confirm that they were together during the podcast Give Them Lala… With Randall in July, making it clear they were serious.

“I knew right away that he was what I call a twin flame,” Fox told hosts Lala Kent and Randall Emmett, per Entertainment Tonight. “Instead of a soul mate, a twin flame is actually where a soul has ascended into a high enough level that it can be split into two different bodies at the same time. So we’re actually two halves of the same soul, I think. And I said that to him almost immediately, because I felt it right away.”

As for the two couples’ relationship to one another, that seems to be going well, too. The four were spotted at neighboring tables at an MMA fight at the UFC Apex in Las Vegas on March 27. The outing seemed to be a double date, as Glamour pointed out at the time, considering the ties between Kelly and Barker and their close proximity in the VIP area.