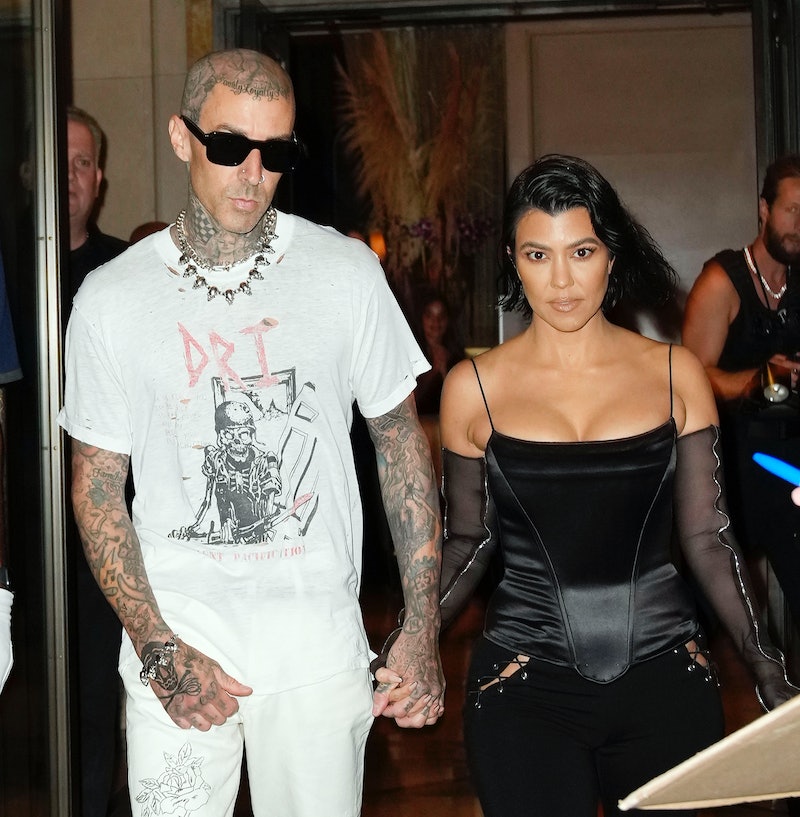 When Travis Barker said that “forever” with Kourtney Kardashian wouldn’t be long enough, he meant it. On Sunday, Oct. 17, the Blink-182 drummer got down on one knee and proposed to the Poosh founder on the beach at sunset. Kardashian shared two photos from the proposal, which reportedly took place inside a heart of red roses at the Rosewood Miramar Hotel in Montecito, California. “Forever,” she wrote. Barker posted about their engagement on his Instagram Stories, where he reshared his fiancée’s post and a video from Kim Kardashian of the pair making out to the tune of Bruno Mars’ “Marry You.”

After sharing the news on social media, the fiancées received many congratulatory messages. Along with the clip of the couple smooching, the Skims founder commented on Kourtney’s post with engagement ring and red heart emojis. On Twitter, she wrote “KRAVIS FOREVER.” Meanwhile, Khloé Kardashian sent Kourtney and her soon-to-be husband love in the form of heart emojis while Kendall and Kylie Jenner shared close-ups of their sister’s ring, which is reportedly worth over $1 million. On Barker’s side, his 15-year-old daughter Alabama also celebrated. “Love u guys,” she wrote.

According to an E! News source, the Keeping Up With the Kardashians star was completely surprised by the proposal. “I could see Kourtney smiling from ear to ear and put her hand over her mouth looking surprised,” the insider told the outlet. “The family cheered for them and went back into the hotel.” Fans weren’t quite as shocked by the news — especially because they’ve teased “forever” on Instagram several times since confirming their relationship in February.

“Forever isn’t long enough,” Barker wrote in September alongside a carousel of photos of the couple in front of the Eiffel Tower. In August, they took their relationship to a whole new level when they flew to Cabo on Kylie Jenner’s private jet, which marked the rocker’s first flight since surviving a plane crash in 2008 that killed four people and left him with major third-degree burns. “With you anything is possible,” Barker captioned a photo of them kissing next to the plane. Kardashian responded, “Anything and everything with you.”