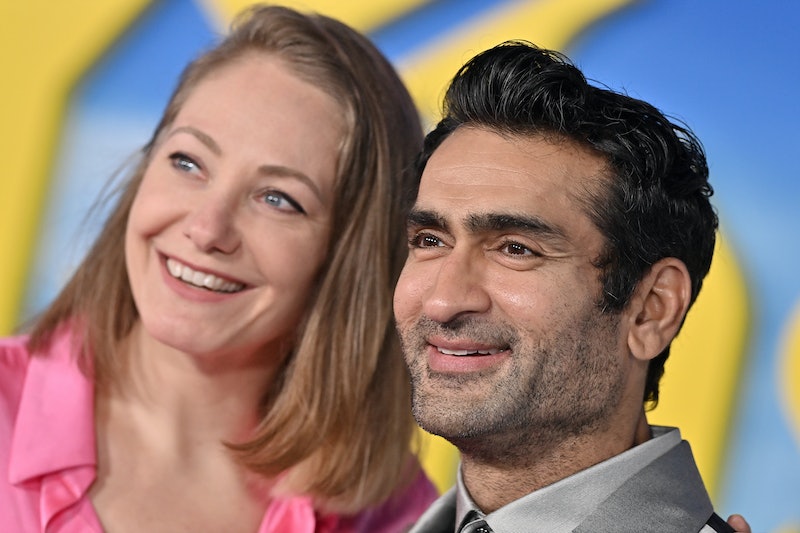 Kumail Nanjiani and Emily V. Gordon’s relationship plays out like a plot of a movie — which is why they made it into one. The couple wrote their 2017 independent film The Big Sick about their own relationship, with Nanjiani playing a character based on himself. The film went on to be nominated for the Oscar for Best Original Screenplay, and it immediately sent Nanjiani’s star on the rise.

The actor and comedian is one of the newest members of the Marvel Cinematic Universe, starring in the new superhero ensemble film Eternals as Kingo (and underwent a physical transformation for the role). But that doesn’t mean he’s stopped working with his wife. Since The Big Sick, the couple has written and/or produced two new shows together, including their new Hulu miniseries Welcome to Chippendales, which also stars Nanjiani as the dance troupe’s founder Somen “Steve” Banerjee. And there’s only more to come from the multi-talented duo, as they told The Hollywood Reporter that they recently submitted two new feature film ideas to different studios.

After being married for 15 years, Nanjiani and Gordon’s relationship timeline proves that the couple that writes together stays together.

According to a 2017 New Yorker profile, the couple first met at one of Nanjiani’s standup gigs in Chicago, where he was lovingly heckled by Gordon at the bar. Rather than get offended at the gesture, the two became friends after running into each other again two nights later. The couple began seeing each other on and off. However, it didn’t fully turn romantic right away for a couple of reasons: Gordon had just been married and divorced, and Nanjiani hadn’t built up the courage yet to reject his parents’ plan of an arranged marriage to a Pakistani Muslim woman.

2006: Emily Is Diagnosed With Still’s Disease

Eight months into their on-and-off situation, Gordon informed Nanjiani that she was going to the doctor one day. That night, as reported by The New Yorker, he got a call saying Gordon was in the emergency room and having trouble breathing. In order to treat what the doctors detected was a lung infection, they put her in a medically induced coma, which they had Nanjiani approve.

Gorden remained in a coma for more than a week, and on her eighth day, she was diagnosed with Still’s disease, a rare inflammatory syndrome that is manageable once treated. Nanjiani visited her in the ICU every day, skipping a huge opportunity to open for Zach Galifianakis on tour, and met her parents for the first time, which made him decide to tell his own folks about her.

“I hung out with her parents while she was in a coma for eight days, and that’s when I told my parents,” he told Cosmopolitan in 2014. “I was like, ‘Hey! Good news / bad news ... I’m in love with a white girl and she’s in a coma.’ Luckily they were really, really good about it and they saw how distraught I was, and they saw how much I loved her, and they obviously aren’t monsters so they were like, ‘OK, what can we do? Can we come visit her?’”

While Gordon was in a coma, Nanjiani promised himself that he would marry her if she made it through, as he told NPR in July 2017. “This sounds like a movie moment, but it really, really isn’t,” he explained. “I remember seeing her laying there in the coma for the first time and I remember having the thought, ‘If she comes out of this, I’m going to marry her.’” As Gordon told The New Yorker, “Spoiler alert — I made it.” Following through on his promise, Nanjiani and Gordon got married three months after she left the hospital.

The couple first got married in secret at a Chicago courthouse, then held a massive Muslim-Pakistani ceremony with Nanjiani’s family that lasted for three days, as they told Cosmopolitan. Years later, after moving to New York and not telling anyone they met that they were married, they held a reception for friends to announce they were lying the whole time. “I knew that everybody would be like, ‘You guys just got married because she was sick and almost died,’” Gordon remarked, explaining why they hid it at first.

The Big Sick came about when Nanjiani met Judd Apatow in 2012 at a live taping of Pete Holmes’ podcast You Made It Weird at Austin’s SXSW Festival. “Judd called my manager and was like, ‘Hey, does Kumail have any ideas?’” he recalled to The Daily Beast in 2017. “So I went and met Judd at 7 a.m. out in Santa Monica, and I told him some ideas and then was like, ‘Well, there’s also this real-life thing that I think could make a good movie …’ and he liked it. He said, ‘Go, figure out a pitch, and come and pitch it to me.’” After his pitch was green-lighted, he and Gordon started writing The Big Sick, with Apatow signing on as a producer.

The Big Sick was finally released in 2017, receiving instant raves from critics and earning the couple joint Oscar nominations for Best Original Screenplay. Naturally, the film’s success kicked off a flourishing creative partnership on top of their romantic relationship.

In 2020, the spouses premiered their Apple TV+ series Little America, on which they served as both writers and executive producers. The eight-episode series (which returns for season 2 in December) depicts different American stories. “That was very important to us: Find different versions of the immigrant experience,” Nanjiani told The New York Times of the series.

2022: Kumail & Emily Take On The Chippendales

Nanjiani and Gordon celebrated their 15th wedding anniversary in August 2022, which didn’t turn out the way he planned. As Nanjiani told Jimmy Kimmel Live!, they had agreed to not get each other gifts due to their busy schedule, but a mutual friend then told him she broke the rules. “So I start spiraling, because I haven’t bought a gift and I’m a man of my word,” he explained. Eventually, he de-stressed by playing a round of the online game “Framed,” where players have to guess the title of a movie based off an image, and that’s where he found his gift: an image from The Big Sick.

“I said, ‘Emily, you should play ‘Framed’ today’,” he recalled. “She says, ‘I know, happy anniversary.’” As touched as he was by the gesture, he was also mad about it. “She’s ruined my day three different ways now,” he joked. “[One], my movie’s not big enough to be with those movies. Two, I thought the universe was telling me I was going to have a great day. Turns out the universe is just telling me that my wife is a liar. And three, now I got to get her an anniversary present.” He still kept it low-key, getting her “a book about birds.”

That November, Nanjiani and Gordon premiered Hulu’s Welcome to Chippendales, which marked their second series together. In an interview with The Hollywood Reporter, the couple opened up about their creative process, revealing that they have separate work offices. “Generally, when we’re writing, we write separately,” he said. “Only in the beginning and end of a project are we in the same room. Then, when we get notes, we’ll sit together and go through it all and come up with a plan together.” However, she added, “You have to do a full 20 minutes of cursing and fury first.”

When they are together, they have strict guidelines on when they can even bring up work. “There are office hours, Monday through Friday,” she explained. “At the end of the week, I clean my computer and turn it off.” Nanjiani added, “If we’re hanging out, and one of us gets an idea about work, we have to ask permission to bring it up. Sometimes the other person says, ‘No!’”

More like this
You Definitely Know The Voice Of Shuri's AI In 'Black Panther: Wakanda Forever'
By Brad Witter
'Wakanda Forever' Is Already Opening Doors For Mabel Cadena
By Grace Wehniainen
'Black Panther 2' Star Dominique Thorne Prioritizes Her Career Over Dating
By Jake Viswanath
Jodie Turner-Smith & Joshua Jackson's Relationship Timeline Includes Her Proposing
By Jake Viswanath
Get Even More From Bustle — Sign Up For The Newsletter

This article was originally published on November 3, 2021