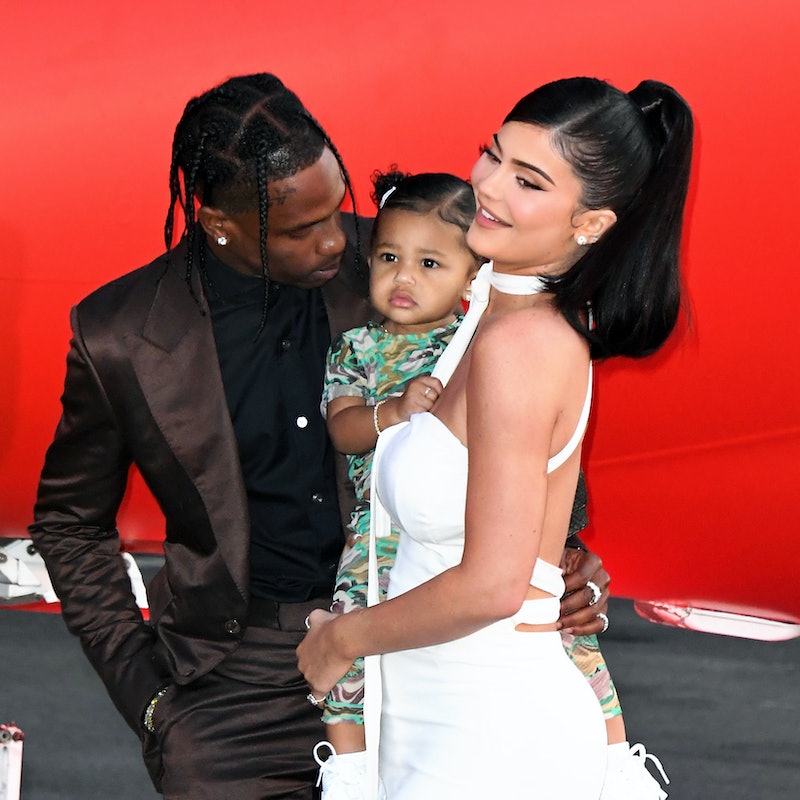 Less than one month after reports surfaced that Kylie Jenner is pregnant, the reality star took to Instagram on Tuesday, Sept. 7, to confirm that she and Travis Scott are expecting baby No. 2. In a video shared to her grid, the Kylie Cosmetics founder gave her 265 million followers a glimpse at her positive pregnancy test, her ultrasound appointments, her growing baby bump, and the moment she shared the exciting news with Travis Scott and family matriarch Kris Jenner.

“Stormi, we’re going to have a baby,” Kris said in the clip when three-year-old Stormi presented her with photos from Kylie’s ultrasound. “This is one of the happiest days of my life.” The 65-year-old Keeping Up With the Kardashians star also expressed excitement on Instagram over what will be her 11th grandchild. “Crying all over again,” she wrote in the comments of Kylie’s pregnancy announcement. “What a special and amazing blessing and gift God has given you.”

Kris isn’t the only member of the Kardashian-Jenner clan who’s thrilled that Stormi will be getting a sibling. “I can’t handle it,” Kendall Jenner wrote. Kim Kardashian couldn’t quite handle the news either. “Crying!!!!” she commented alongside three red heart emojis. On her Instagram Stories, the Skims founder gushed over her kids getting another cousin to play with. “OMGGGGG more babies!!!!” she wrote. “More cousins!!!! Congrats @kyliejenner & travisscott.”

Kourtney Kardashian and Khloé Kardashian also reacted to the news that they’ll be getting another niece or nephew sometime soon. “Crying this is so beautiful my blessed angel sister,” the Poosh founder wrote. Kourtney’s boyfriend, Travis Barker, also weighed in with prayer hands and red heart emojis. Khloé, for her part, left a string of teary-eyed emojis before hopping back into the comments with a short but sweet message. “Awwwww,” she wrote.

It wasn’t just Kylie’s famous family who responded to her emotional pregnancy announcement; it was several of her famous friends, too. “YESSSSS GOD,” the family’s longtime friend Malika Haqq wrote in the comments. The 24-year-old beauty mogul’s best friend, Stassie Karanikolaou, wrote on her own Instagram Stories that she “can’t wait to meet this lil angel.” “I love you,” she added. “Congrats mama @kyliejenner.”

Several other A-listers, including the Hadid sisters and Hailey Beiber, also congratulated the KUWTK star. “I can’t,” Bella Hadid wrote alongside crying, heart, and sparkle emojis. “So beautiful. Bawling!!! So happy for u.” Gigi commented that her heart is “bursting” for Jenner, and Hailey chimed in with a simple message of support for the expectant parents. “I love you guys!!!!” she wrote. Ashley Graham, James Charles, and LaLa Anthony were among the other celebs who sent Kylie love in the comments.

After pregnancy rumors made the rounds on TikTok in mid-August, Page Six reported on Aug. 20 that Kylie and Travis were expecting another baby. The reports came after Caitlyn Jenner announced that she had another grandchild on the way, but the former Olympic athlete was actually referring to her son Burt Jenner and his girlfriend Valerie Pitalo, who have a third child on the way. Still, sources confirmed to several outlets that Kylie was pregnant. “She has been trying for almost two years to get pregnant,” an insider told Us Weekly last month. “She has always wanted another kid close to [her 3-year-old daughter] Stormi’s age.”

Kylie and Travis welcomed Stormi in February 2018 after keeping the pregnancy a secret. “I’m sorry for keeping you in the dark through all the assumptions,” the reality star wrote on Instagram at the time, adding that her pregnancy was one she “chose not to do in front of the world.” Elsewhere in the caption, Kylie revealed that she wanted to handle her first pregnancy in “the most positive, stress-free, and healthy way” possible. “I knew my baby would feel every stress and every emotion, so I chose to do it this way for my little life and our happiness,” she wrote. “... I’ve never felt love and happiness like this I could burst!”