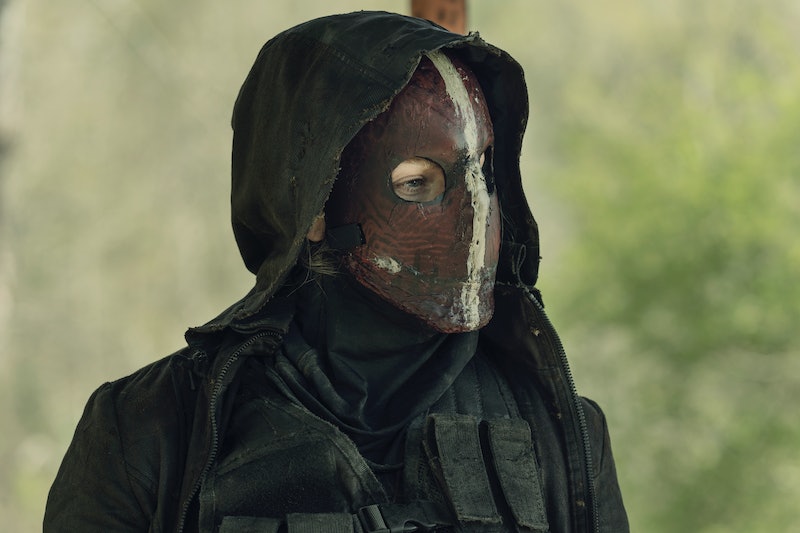 Spoilers ahead for The Walking Dead Season 11, Episode 4. After going their separate ways last season, Daryl left a heartbreaking note for his woodsy lover Leah asking her to find him — and, well, that’s what she did. What Daryl didn’t know when he extended the invite is that she’s part of the very dangerous Reapers, who have proven themselves to be even worse than anyone realized. (Pope burned one of his men alive because he got injured during a fight! This is not a group you can reason with.)

Of course, fans glommed onto the theory that Leah was a Reaper from her very first appearance in Season 10. In hindsight, the clues were pretty clear — starting with Leah’s military tattoo reading, “Fortitudo Saludis.” As ComicBook.com explained, the phrase comes from a Bible verse and can be “roughly translated to mean support in times of war.” Now that we’ve met the Reapers, this seems to be a favorite saying of theirs. They believe in facing their enemies head-on and finding spiritual peace in the violence they inflict on others. “We saw God everywhere,” Pope explained to Daryl of the group’s time in war. “He was in the blood, and the horror, and the death. He was there, telling us where to go.” Now we know the Reapers’ motivations a little bit better — and they are not good, to say the least.

Fans have long been protective of Daryl and his potential relationships — and considering his former flame is part of a deadly cult, there’s even more reason to worry. But despite her horrible friends, Leah never really lied to Daryl. During their time together, she only ever said she had lost her people; apparently, they simply came back to find her. Knowing the Reapers, it’s also possible that Leah has been manipulated to stay in the fold against her better judgement. She seems to find some of the group’s practices pretty harsh, and even tries to persuade Pope to ease up while simultaneously helping Daryl to get in his good graces. For all her faults — beginning with the company she keeps — Leah at least seems to want Daryl to survive.

What will happen between Leah and Daryl from here remains a mystery (neither of them appear in The Walking Dead comics), but their complicated dynamic could draw from other characters. In the comics, Sherry had to navigate a similarly precarious relationship with both the Saviors’ leader, Negan, and her former husband Dwight, who many believe is based on Daryl. She can’t handle the strain and ultimately separates from Negan in the comics, which seems likely to be Leah and Daryl’s fate too. His spinoff with Carol is still forthcoming, and there isn’t room for three on the motorcycle.

More like this
This Episode 6 Moment Foreshadows Viserys' Fate On 'House Of The Dragon'
By Grace Wehniainen
Nicola Coughlan Shared A Lady Whistledown Excerpt From ‘Bridgerton’ Season 3
By Grace Wehniainen, Alyssa Lapid and Sam Ramsden
A New 'And Just Like That' Table Read Pic Confirms A Key Character's Return
By Jack Irvin and Grace Wehniainen
The 50 Most Powerful Characters In The Marvel Universe, Ranked
By Johnny Brayson and Nola Pfau
Get Even More From Bustle — Sign Up For The Newsletter