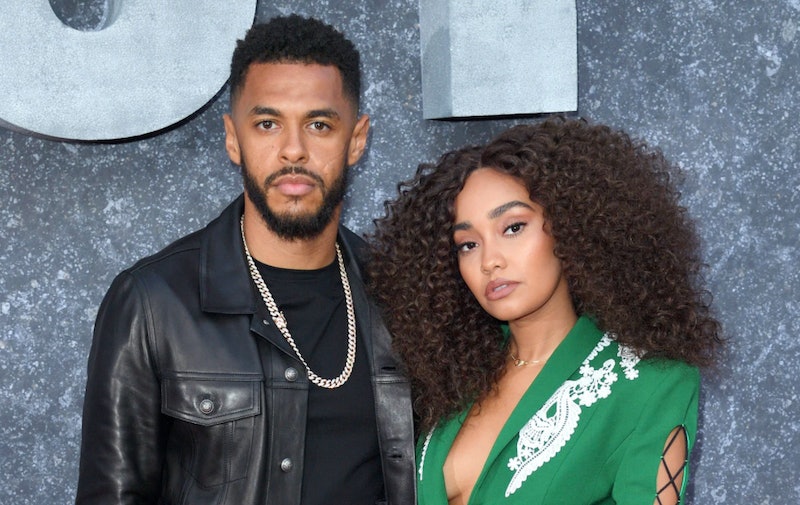 Leigh-Anne and Andre are said to have met while both of separate holidays with friends in Marbella.

A milestone in any modern relationship, Leigh-Anne went Insta offish with her man by posting a photo of them together laughing, accompanied by the caption: "Gonna miss this one" Cute!

The next month, on Feb. 26, she then shares an adorable snap of the couple in bed together, alongside the words: "So he hates cheesy captions.. but i'm a cheeseball.. and so is he low-key but I f***ing love this boy.. my actual [world] miss him too much"

While the couple understandably both have busy schedules, they found the time to take a special trip away together in the summer of 2017. Leigh-Anne marked the occasion with another Instagram post of the pair on the beach, writing: "Paradise with my paradise."

While the world knew they were dating, the couple waited until 2018 to make their major red carpet debut together. Leigh-Anne brought Andre to the BRITs in 2018, where they posed up a storm together.

December 2018 — Moving In Together

The couple marked another major relationship milestone at the end of 2018, after two and a half years of dating. Leigh-Anne shared a photo of the two of them in what looks like an incredible house, writing: "Sometimes I wish I could put it into words.. but I just can’t... I couldn’t love you anymore if I tried. First Christmas in our new home together.. Merry Christmas everyone from our family to yours."

Perhaps part of any musical couple's relationship evolution, Andre appeared in the music video for Little Mix's Think About Us. Leigh-Anne shares some behind-the-scenes footage, writing: "Kinda forced @andregray_ to be cringe with me in the new video #ThinkAboutUs"

How time flies! The couple celebrated three years together, with Leigh-Anne, once again, marking the occasion with a cute Instagram post. She said: "It doesn’t make any sense unless I’m doing it with you... My right arm, my escape from the world and my soul mate. Where the hell has 3 years gone? All I know is I’m ready for the rest of my life with you. Happy Anniversary you beautiful soul."

After four years together, the couple got engaged when Andre got down on one knee and popped the question in their back garden during lockdown. Leigh-Anne shared a series of snaps of the moment, with the caption: "Guys.. wtf has just happened... He bloody did it, and I said yes I'm marrying my soul mate, the man of my flipping dreams... I am lost for words, so I think I'm just going to go cry some more @andregray_ I love you so much My world is literally complete"

And then there were three! In the sweetest baby bump reveal ever, Leigh-Anne shared the news that she and Andre are expecting their first child via Instagram. Their friends and family were quick to congratulate the couple. “I can’t stop staring at these pictures,” wrote Fellow Little Mix bandmate Perrie Edwards. “You’re a vision. Ily both so much! CONGRATULATIONS my beautiful sister!” Jade Thirlwall added: “Love you so much. Look at this family.”

We can’t wait to meet their baby, too!