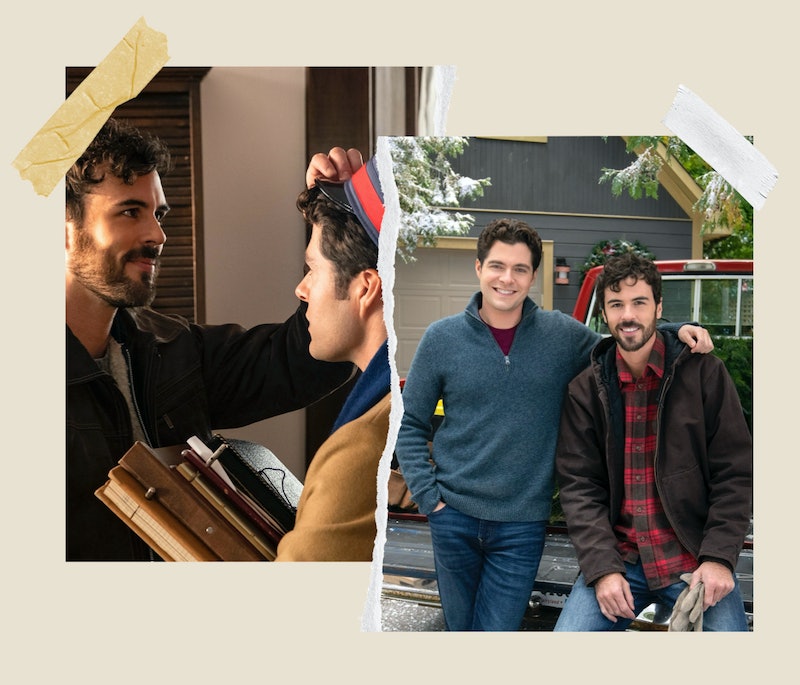 Romantic holiday TV movie season is upon us, and this year Lifetime is debuting its first queer take on the genre, The Christmas Setup. It was a long time coming for the network, which first featured a side plot about a gay couple in Christmas Around the Corner two years ago. But executive producer Danielle von Zerneck was eager to bring a queer storyline to the forefront while still making a movie that fits squarely in the confines of Lifetime's annual Christmas lineup. "I've always enjoyed being part of this advent calendar of movies," von Zerneck tells Bustle. "I wasn’t looking to make a movie that just breaks all the rules. I really wanted to have people [working on the movie] who were willing to play in this specific [genre] sandbox."

To bring the film to life, von Zerneck recruited Michael J. Murray, who's penned holiday movies for both Lifetime and Hallmark. This was the first time the gay writer was able to tell a story that reflected his true identity. Lifetime also made sure to hire queer creatives across the board, from director Pat Mills to married couple Ben Lewis and Blake Lee, who play the film’s leads. The result is a film that intentionally embodies many of Lifetime’s traditional Christmas movie tropes while celebrating a truly authentic queer love story.

The Christmas Setup begins when New York City lawyer Hugo (Lewis) comes home for the holidays. Once there, he learns that his mother Kate (Fran Drescher) has strategically hired his high school crush Patrick (Lee) to drop off the Christmas tree. Thanks to a little matchmaking from his mom, the spark reignites between Hugo and Patrick and they begin to fall in love at Christmastime. Along with the story’s classic conceit, there’s a ton of other welcomed schmaltz throughout the film: the couple work together to save a local historical building, and there are plenty of meet-cutes, romantic kisses, snowfall, and, of course, caroling. "Just by looking at a different way a family might be constructed doesn't mean that the Christmas movie is any different in terms of the way it goes about making you feel romantic and cozy," von Zerneck says. "It's like a warm blanket around the holidays."

"Just by looking at a different way a family might be constructed doesn't mean that the Christmas movie is any different in terms of the way it goes about making you feel romantic and cozy."

It's a stark contrast to one of the other major queer Christmas movies of the year, Hulu's Happiest Season, which sparked controversy for its “coming out” storyline. Happiest Season centers on Harper (Mackenzie Davis) who forces her girlfriend Abby (Kristen Stewart) to pretend to be straight for the holidays so Harper's family won't learn the truth about their relationship. Them called it "a rather trite 'coming out' story" and fans were disappointed that Harper and Abby stayed together, especially when Aubrey Plaza's character Riley seemed like a better (and less toxic) match for Abby.

Unlike Happiest Season, The Christmas Setup skips the "coming out" section of the story altogether. Both Hugo and Patrick are out and proud when the movie starts, and their families don't treat them any differently than they treat the straight characters. Most importantly, sexuality alone doesn't drive the plot. That was key for von Zerneck, who specifically didn't want to do a "coming out" story. "I think once you see our movie, you don't think about it as being, 'Oh, this is LGBTQ.' It's just inclusive,” she says. “This experience is universal. We all love a good romance.”

But what's more exciting than the individual movies themselves is that for once, there are multiple queer holiday films for viewers to choose from. In addition to Lifetime and Hulu's offerings, Hallmark came out with The Christmas House, which features a gay married couple looking to adopt a baby. And Paramount TV has Dashing in December, where a man returns to his family's ranch for the holidays and falls for one of the farmhands. Each movie has its own approach to the genre, and none of them are the "right" one. What's right is having enough to choose from and representing all kinds of queer stories. And von Zerneck, for one, hopes this is just the beginning. "I can't speak for Lifetime, but I get the impression that this is certainly not a one and done [movie]," von Zerneck says. "This is just a new path forward, opening up different ways to tell stories."

More like this
11 Movies To Watch At The 2023 Sundance Film Festival
By Chloe Foussianes
At 28, Rosie Perez Risked Her Career To Stop Playing Stereotypes
By Gabrielle Bondi
Here’s Everything Coming To & Leaving Netflix In February
By Jake Viswanath
Rupert Grint Just Shared A *Major* Update About Ron Weasley’s Future
By El Hunt
Get Even More From Bustle — Sign Up For The Newsletter
From hair trends to relationship advice, our daily newsletter has everything you need to sound like a person who’s on TikTok, even if you aren’t.