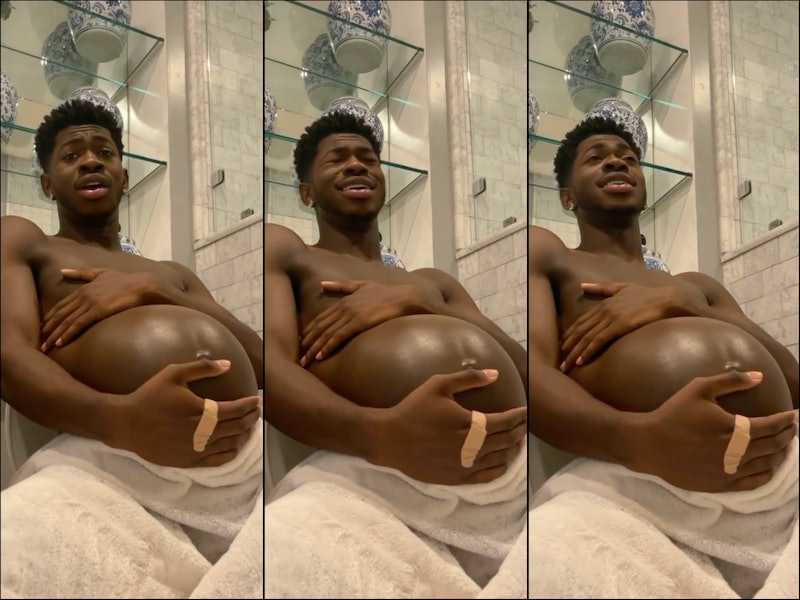 Lil Nas X has taken the “Old Town Road” to the world of MONTERO. Two years after he took over the world with “Old Town Road,” the longest-running Billboard No. 1 hit of all time, the Grammy-winning rapper is finally set to release his debut studio album, MONTERO, named after his birth name, Montero Lamar Hill.

However, the song became yet another cultural phenomenon that 14-year-old Montero could’ve never predicted. The song’s music video saw Lil Nas X sliding down a pole to Hell and giving Satan a lapdance, igniting thousands of Twitter memes and the anger of conservative Republicans nationwide. The “MONTERO” video ended up winning Video of The Year at the Sept. 12 MTV Video Music Awards. A few days later on Sept. 16, a “pregnant” Lil Nas X went into labor to give birth to his first studio album on the project’s Sept. 17 due date “I guess I am the father as well as the mother,” he explained.

To promote the “MONTERO” video, Lil Nas X notably made Nike angry when he collaborated with MSCHF on “Satan Shoes,” a drop of 666 limited-edition pairs of Air Force One sneakers made with drops of blood, which resulted in a cease-and-desist order from the shoe giant.

That Nike controversy ended up laying the groundwork for the rapper’s next single, “Industry Baby” featuring Jack Harlow. In the “prelude” for the music video, Lil Nas X faces off against Nike prosecutors (played by himself) in court and is sentenced by the judge (also himself) to five years in Montero State Prison, where the “Industry Baby” video takes place. Now, he’s ready to bare his soul on what he promises to be an album full of bops and exploration of his sexuality.

In September, Lil Nas X told Bustle that he wanted fans to experience MONTERO as a complete album, rather than focus on some individual songs, as it tells the story of his personal and professional journey so far. “I wanted people to get to know Montero,” he says, referring to his birth name. “Get to know my life story, to hear things that are actually happening in my life — things that have happened, and things I'm hoping for. Past, present, future, you know?” Here’s everything to know about MONTERO.

When Is MONTERO’s Release Date?

MONTERO is scheduled to be released on Sept. 17, 2021, as announced by an album teaser posted to Twitter and the Welcome to Montero site. In the hilarious trailer, Lil Nas X plays a glow-eyed newscaster who warns viewers that a “power bottom rapper” (himself) and his “caucasian friend” (Harlow) have escaped from prison, as seen in the “Industry Baby” video. While on the run, Lil Nas sees a mysterious phone booth that draws him into the world of MONTERO.

“Creating this album has been therapy for me,” the rapper wrote to announce the news. “I’ve learned to let go of trying to control people’s perception of who i am, what i can do, and where i will be. I’ve realized the only opinion of me that really matters is my own.”

Yes, Lil Nas X is pregnant with his first child MONTERO, who has a due date of Sept. 17. In all seriousness, the rapper has been pretending to be pregnant by sporting an expertly done fake baby bump in many of his promo materials. It started with Lil Nas doing a full-on pregnancy photoshoot with PEOPLE, complete with floral backgrounds, and explaining how he conceived the baby. “I guess I am the father as well as the mother, but I guess the producers who worked on it are like the dads too,” he said, before thinking again: “Or maybe uncles.”

Much like most things he’s done during the MONTERO era, Lil Nas garnered some backlash for pretending to be pregnant. But as he explained to Bustle in an interview, he never gives them the time of day. “I guess I don’t really care for the feedback,” he said. “Some people are like, ‘Oh my God, that’s genius.’ And some people are like, ‘He’s terrible and the worst person of all time.’ But I feel like it doesn’t really matter. I’m having fun. I’m having a great time.”

Since announcing his “pregnancy,” Lil Nas has been preparing for MONTERO’s arrival as any pregnant person would, by sharing pregnancy photos constantly, setting up a baby registry where you can donate to charities inspired by the song titles, and throwing a decadent baby shower (that no one showed up to). It’s all coming to a head the day before MONTERO’s due date, when he posted a video on Twitter of him “having contractions.” Clearly, the rapper is in labor.

What Inspired The MONTERO Album Cover?

Lil Nas X revealed the epic MONTERO album cover on Aug. 31, which sees the rapper floating naked through a utopian paradise of ancient statues, rainbow prisms, and glowing waterfalls, giving fans a deeper look at the world he created with MONTERO. The artwork is basically Lisa Frank goes to Greece, but he had a whole other set of inspirations for the design.

In a series of tweets, the rapper revealed that he was inspired by a piece by artist John Stephens entitled (Genesis II), and the Bible verse of the same name that tells how Sunday became God’s day of rest. He also said he was influenced by that meme of SpongeBob levitating from the floor with headphones on, as the rainbows open up from above.

‌With the amount of times that he’s used SpongeBob as both memes and a point of inspiration, the iconic sponge should just become Lil Nas X’s manager at this point.

Who Is Featured On The Tracklist?

MONTERO will include 15 songs total, with 12 new tracks joining the title track and singles “Sun Goes Down” and “Industry Baby.” But perhaps most impressively, the rapper managed to bag many A-list collaborators for the album. Aside from Harlow, MONTERO will feature Miley Cyrus, Megan Thee Stallion, Doja Cat, and the legendary Elton John.

The MONTERO tracklist is as follows:

What Memes Has MONTERO Spawned?

The most important part of Lil Nas X’s MONTERO era, aside from providing vital LGBTQ representation in the rap world, is the endless memes. As perhaps the most internet-savvy artist of Gen Z, Lil Nas X designed every step of the campaign to serve as perfect meme fodder, and Twitter hasn’t disappointed. In many cases, the rapper himself was providing the memes.

How Is Lil Nas X Promoting The Album?

Lil Nas X has put in just as much work in the album’s detailed rollout as he has in the album itself. Aside from preparing to give birth, he’s gone out of his way to create an experience for fans in the lead-up to MONTERO. The rapper has created multiple teaser videos for the album, all unveiling a new part of the world of MONTERO, and many including unheard snippets of new tracks. On the night before the album’s release, the rapper will host The Montero Show on YouTube, which he’s been teasing with ’90s talk show-style ads. His special guest will be none other than a still-pregnant Lil Nas X.

The rapper has also been providing fans with extravagant, thought-provoking performances at major awards show. At the BET Awards in June, he joyfully destroyed homophobes everywhere by kissing a male dancer after performing the title track. Before he won Video of the Year for “MONTERO (Call Me By Your Name)” at the 2021 VMAs, Lil Nas recreated the “Industry Baby” video with Harlow onstage, before stripping down to his drawers for a steamy shower number with male dancers, providing one of the most classic VMA moments of the night.

Even before the album drops, Lil Nas X has already taken over the world with MONTERO.

This article was originally published on Sep. 2, 2021