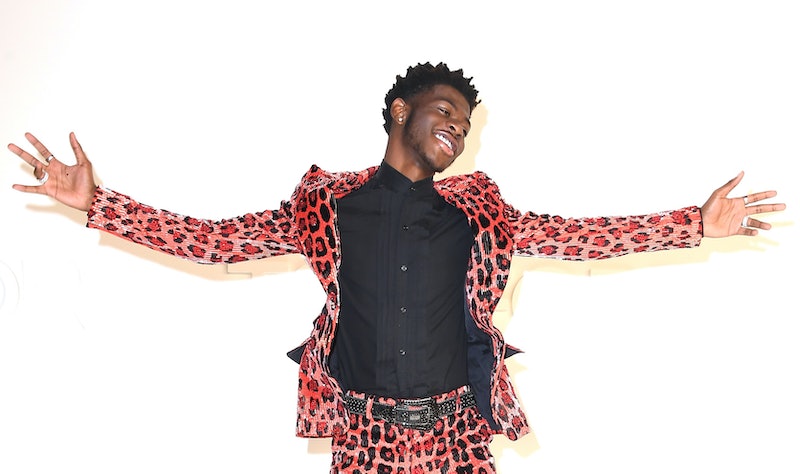 There are few musicians who have been able to make more out of one song than Lil Nas X and his behemoth hit “Old Town Road,” which became the longest-leading No. 1 song ever (at 19 weeks) in the Billboard Hot 100 chart’s six-decade history. The rapper, who is set to perform at the MTV Video Music Awards on Sept. 12 and release his MONTERO album on Sept. 17, is one of the world’s most-discussed artists thanks to his hit singles, the way he owns his identity as an openly gay man, and an incredible understanding of what goes viral on social media in today’s streaming era.

The artist began his global ascension in 2018 with “Old Town Road,” which was unlike anything anyone had heard before. That song and his first EP helped Lil Nas X become the most-nominated male at the 62nd Grammy Awards, where he won Best Music Video and Best Pop Duo/Group Performance for his “Old Town Road” remix featuring country legend Billy Ray Cyrus. His upcoming collaborations with Elton John, Miley Cyrus, Megan Thee Stallion, and Doja Cat will likely attract him even more fans, who will join his existing fanbase in buying his music, concert tickets, and merch to increase his net worth even more.

“The videos that [Lil Nas X has] done are so outrageous and so brilliantly done,” Elton John, whose “One Of Me” collab will be on Nas’ new album, recently told Bustle. “‘MONTERO’ was just extraordinary and ‘Industry Baby’ is just off the charts. ... He’s not just a rapper, he sings really well too. He’s got a really brilliant visual brain, and his songs tell stories.”

Lil Nas X has made millions from a relatively limited discography. Let’s look at all the ways he has made his riches in a relatively short time — and even what he’s spent some of it on.

What Is Lil Nas X’s Net Worth?

Between $7 MILLION and $14 MILLION

Lil Nas X, at just 22 years old, is reportedly worth somewhere between $7 million and $14 million, and those numbers are sure to climb in the coming years as he releases more music, works with additional brands, and eventually tours, which is where artists make a brunt of their money.

Any discussion regarding Lil Nas X’s net worth has to start with “Old Town Road,” which is certainly responsible for the lion’s share of his millions, even to this day. The track is one of the most unlikely hits in history, and it also stands as one of the biggest successes ever in the music industry. Nas purchased the music that backs “Old Town Road” on one of the many websites where up-and-coming producers can sell their beats to rising rappers and singers for just $30. While the tune came very cheap, producer YoungKio reportedly still makes a cut of the royalties, as he’s credited as a songwriter, so he has surely earned hundreds of thousands or even millions from it.

Lil Nas X recorded “Old Town Road” at a local Georgia studio for only $20, as the venue was having a special for musicians who didn’t have much money. He released the track, and it didn’t take long to begin reaching a large audience on TikTok, where it eventually went viral. As the tune began to appear on charts and it was clear something very special was about to happen, a bidding war between record labels took place, and Lil Nas X eventually signed with Columbia Records for an untold, but probably massive, sum.

“Old Town Road” shot right to No. 1 on the Hot 100, where it ended up ruling for a history-making 19 weeks, and it still holds as the longest-running leader of all time, beating previous record-holders “One Sweet Day” by Mariah Carey and Boyz II Men from 1995 and “Despacito” by Luis Fonsi and Daddy Yankee with Justin Bieber from 2017.

To date, “Old Town Road” has moved 14 million copies in the U.S. alone, according to the Recording Industry Association of America, standing as the most-certified song of all time. The cross-genre tune has racked up more than 1.2 billion plays on Spotify, and it has surely been streamed hundreds of millions, if not billions of times on other platforms like Apple Music and Pandora, bringing its total play count to well over 2 billion. On YouTube, the official music video has been viewed more than 800 million times. The royalties earned by all those clicks and watches and listens (as well as countless radio plays) may be individually small, but they add up quickly.

As a songwriter, Lil Nas X takes home a cut of all the money his hit single makes, and he’s undoubtedly earned millions of dollars just from this one song.

While “Old Town Road” might be his big moneymaker, Lil Nas X is not a one-trick pony. The singer-songwriter has charted half a dozen top 40 hits in the U.S., and even without the first smash, he’d still be a successful artist. He knows how to create and promote a hit song.

“Panini” went six-times platinum, “MONTERO (Call Me by Your Name)” and “Rodeo” with Cardi B have gone double platinum, and newer cuts “Holiday” and “Industry Baby” with Jack Harlow have already earned platinum and gold certifications, respectively.

On YouTube, Nas has more than 15 million subscribers, and his videos have collectively been viewed more than 4 billion times. On Spotify, he is played by more than 55 million people every month, and his singles accrue tens of millions of streams. “MONTERO (Call Me by Your Name)” is fast-approaching 900 million listens, while “Industry Baby” is nearing a quarter of a billion plays.

Lil Nas X is getting ready to release his debut album MONTERO (his real name), which is easily one of the most highly-anticipated titles in recent memory. The set could easily move millions of copies, and it may spin off several more top 10 hits.

With just one EP to his credit, Lil Nas X entered the 2020 Grammys as one of the most-nominated musicians, tying with Billie Eilish with six chances to win. “Old Town Road” was up for Record of the Year, he was in the running for Best New Artist, and somehow, his short collection titled 7 was a contender in the Album of the Year category. While he didn’t claim any of the major categories, he did take home two trophies, winning both Best Music Video and Best Pop Duo/Group Performance. Nas has also won countless other trophies, including accolades at the American Music Awards and MTV VMAs.

In addition to pulling in millions from making music, Nas has also found the time to work with several brands, and all those partnerships have lined his pockets further. Exact figures are hard to nail down, as most companies prefer not to disclose how much they’ve paid to partner with a musician, but as he becomes more and more famous, the price tag goes up.

Lil Nas X’s first major brand deal was with Wrangler, which hopped on the success of “Old Town Road” as quickly as possible. The apparel company worked with the hip-hop musician to create a small capsule collection of jeans and shirts, some of which sold out quickly.

During the 2020 Super Bowl, Lil Nas X appeared in an ad for Doritos alongside Cyrus and actor Sam Elliott in a dance-heavy clip that had audiences laughing along as “Old Town Road” played. Personalities who work with brands for these kinds of advertisements, which often cost millions, are paid incredibly well, so Lil Nas X likely earned a very healthy payday for the joint effort.

Nas has also teamed up with companies like Logitech, Panera, and most recently Taco Bell, which even gave him the title of chief impact officer.

His most high-profile partnership with a company saw him release his own line of shoes, though the rollout was not without controversy. Timed around the drop of the music video for his single “MONTERO (Call me By Your Name),” the musician worked with New York City-based art collective MSCHF to create what he deemed the “Satan Shoes,” which were modified Nike Air Max 97s that included a drop of human blood. Only 666 pairs were made, and they were priced at more than $1,000 each. They sold out in a minute, proving his immense popularity.

Nike sued MSCHF, as the collective didn’t have the rights to use the giant’s design, but Lil Nas X turned the ordeal into a PR opportunity, one which he featured in his “Industry Baby” video.

Lil Nas X recently scored one of the most high-profile brand partnerships of his career, but not just because of the company that signed the checks. The “Industry Baby” singer teamed up with the legendary Elton John for an Uber Eats ad campaign that saw the two swapping signature styles.

In early 2021, Lil Nas X also revealed that he had purchased his first home. The multi-genre musician now lives in Sherman Oaks, Calif., on a property spread across 8,500 square feet. He shared some snaps of the residence with People, and the home reportedly cost him $2.4 million. While it was certainly expensive, the purchase was a smart investment, and if he ever moves, Lil Nas X can probably make a pretty penny from selling the home.

More like this
Where Is Former Bachelor Host Chris Harrison Now & What Is His Net Worth?
By Hugh McIntyre
Everything To Know About Taylor Swift’s 10th Studio Album, 'Midnights'
By Grace Wehniainen and Jake Viswanath
Twitter Is Freaking Out Over Rihanna’s 2023 Super Bowl Halftime Show Announcement
By Stephanie Topacio Long
What Demi Lovato Really Thinks About Child Stardom, Depression, & Sobriety
By Radhika Menon
Get Even More From Bustle — Sign Up For The Newsletter