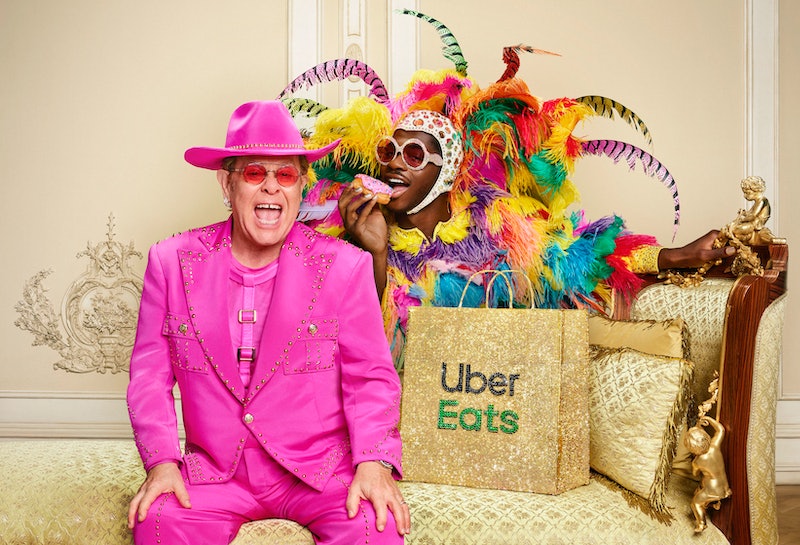 Lil Nas X just stole Elton John’s look — and the Rocket Man returned the favor. Ahead of the rapper’s MTV Video Music Awards performance on Sept. 12 and the release of his MONTERO album on Sept. 17, Lil Nas X teamed up with the legendary musician for a new Uber Eats ad campaign. In the colorful “Tonight I’ll Be Eating” campaign videos released on Sept. 9, the duo switch iconic looks, ride playground horses, and fight about whether fries pair well with mayonnaise. In one video, the “Tiny Dancer” singer wears Lil Nas X’s pink Versace cowboy suit from the 2020 Grammys, and in turn, he sports John’s extravagant feather look.

“It was actually probably one of the coolest [outfits] I’ve ever been in; it’s my lock screen now,” Lil Nas X tells Bustle during a break from rehearsing for the VMAs. Meanwhile, John saw the comedy in their switcheroo. “I just thought that would be a killer idea,” the five-time Grammy winner tells Bustle. “We were laughing so hard when we saw each other because it’s just a brilliant gag.”

The videos weave the pair’s flair for flamboyant costumes with Lil Nas X’s wit and John’s dry sense of humor. The two had a blast on set, with John saying they got along “like a house on fire.”

Lil Nas X is still in shock by John’s unexpected on-set prank, which ended up becoming a campaign teaser. “We had the lines mixed up for what we were about to do, and he kind of was like, ‘B*tch stole my look,’” he recalls. “I was not prepared for him to say that and it was hilarious.”

While they may seem like an unlikely pairing to some, those who follow both artists know how much they have in common. As out gay men, John and Lil Nas have broken ground for LGBTQ+ representation in the music industry, not only facing backlash for living authentically but also for embracing it in their art. John has been an outspoken crusader in speaking out about LGBTQ+ issues as well as bringing forth HIV awareness since the 1980s. Not only has Lil Nas continued John’s mission in educating the public to dispel stigmas about HIV and AIDS, but he does so with the added struggle of battling homophobia in the rap world, as seen with DaBaby’s recent comments, and the Rock & Roll Hall of Famer is in awe of how the artist navigates it all.

“[Lil Nas X] doesn’t give a flying f*ck. ... He’s very intelligent. He uses his words wisely. And he’s very, very courageous. We need more people like that in the LGBTQ community.”

“He doesn’t give a flying f*ck,” John says, recalling the time when South Dakota Gov. Kristi Noem went after the rapper for selling the infamous “Satan Sneakers” online. “Some governor has a go at him and he says, ‘Haven’t you got no time, why are you worrying about me? You’ve got a pandemic on your hands. You’ve got a whole state of people to look after.’ He’s very smart. He’s very intelligent. He uses his words wisely. And he’s very, very courageous. We need more people like that in the LGBTQ community. ... I took to him like a bee to honey. I just thought this is someone I love already.”

For Lil Nas, John has been a constant presence throughout his life, and when they finally met, an instant friendship was formed. “[Elton is] just someone that’s always been in the cultural zeitgeist,” he says. “And I didn’t actually meet him until I believe the iHeartRadio Awards, and he was just super nice and encouraging and he told me the sweetest of things, you know?”

John, who has kept a close eye on Lil Nas X’s MONTERO era, continues to offer enthusiastic praise to his musical friend, touting his recent “game-changing videos” and overall artistry: “The videos that [Lil Nas X has] done are so outrageous and so brilliantly done — ‘MONTERO’ was just extraordinary and ‘Industry Baby’ is just off the charts. ... He’s not just a rapper, he sings really well too. He’s got a really brilliant visual brain, and his songs tell stories.”

On Creating Their “One Of Me” Song

Their natural connection over time led Lil Nas X to ask John if he wanted to play piano on “One Of Me,” one of the most personal tracks on his debut album MONTERO, which promises to tell the story of his journey so far. “I felt like I needed someone to add that extra oomph and someone who’s probably been through similar situations, such as myself,” he says. “I mean, it’s Elton John. If I was able to get Elton on any song, I had to go for it obviously.”

Luckily, it wasn’t as hard to secure John as Lil Nas initially thought. “I would have played ‘Mary Had a Little Lamb’ if he was singing it,” John says. It was simply a bonus that “One Of Me,” which will also be on John’s upcoming album The Lockdown Sessions, has such a strong and poignant message. “He’s basically saying f*ck off to the people who said he couldn’t do it,” John explains, adding that he recorded his piano part and “sang a little bit upon it” at Abbey Road Studios in London. “In a brilliant way, he’s putting down the people that put him down. ... I admire what he stands for so much. I would have jumped to playing on anything, but he doesn’t just make ‘anything’ records. He makes very intelligent records with intention and lyrics with a meaning.”

In the lead-up to MONTERO and “One Of Me,” Lil Nas X has been pretending to be pregnant — with his new album that has a “due date” of Sept. 17. The artist even made his “pregnancy” announcement with PEOPLE, sporting a fake belly and flower crowns in a stunning yet “over-the-top announcement photos.” And just like with everything he does so far, from giving Satan a lapdance to dancing naked in a jail in his music videos, Lil Nas X shrugs off what haters have to say about it. “I guess I don’t really care for the feedback,” he explains. “Some people are like, ‘Oh my God, that’s genius.’ And some people are like, ‘He’s terrible and the worst person of all time.’ But I feel like it doesn’t really matter. I’m having fun. I’m having a great time.”

On Satisfying Their Cravings

For the record, Lil Nas X’s biggest “pregnancy craving” and most-ordered Uber Eats dish is pasta from Los Angeles eatery Jon & Vinny’s. As for Elton John, he mostly orders Chinese food from Uber Eats, which has recently expanded into delivering alcohol, groceries, and convenience items. “[Chinese food is] not something I can make at home,” he admits. But one thing that hasn’t been settled is their fries-with-mayo debate. Spoiler alert: No one may win this.