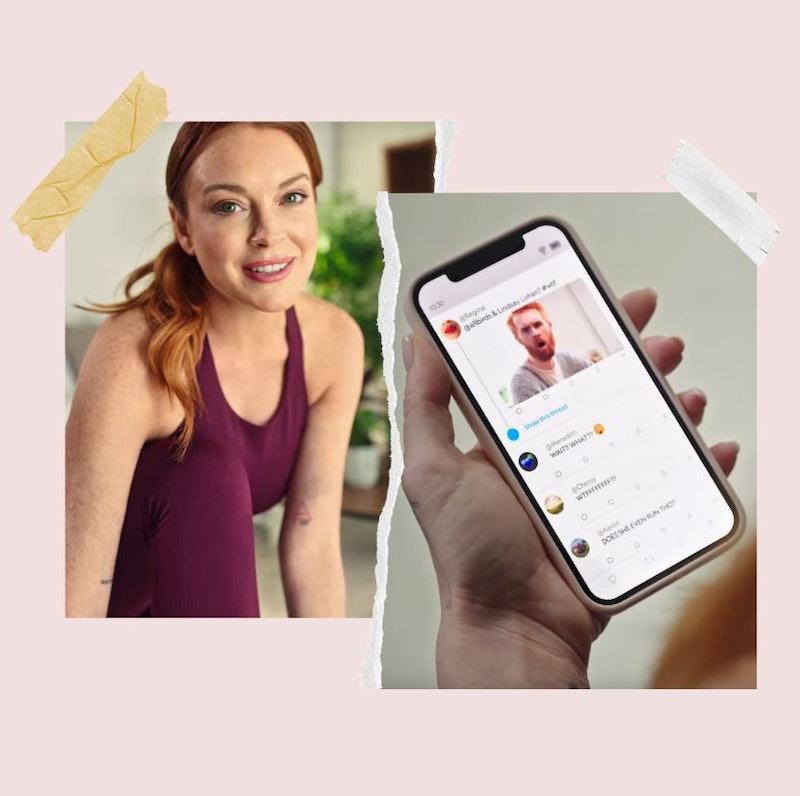 A fetch product calls for a fetch spokesperson, so Allbirds turned to Lindsay Lohan to help launch the footwear company’s limited-edition Tree Flyer sneakers in Lux Pink. Naturally, they tapped into her Mean Girls past because, well, “on Wednesdays we wear pink.” Her new commercial for the brand is full of nods to the classic 2004 comedy — plus other classic Lohan films, including The Parent Trap and Herbie: Fully Loaded.

The level of detail in the ad is honestly impressive. Spotting all of the nostalgic Easter eggs requires eagle eyes and a deep love of Lohan’s best work. For every obvious Mean Girls reference, there’s another that takes a lot of pausing, zooming, and scrutinizing to catch. You have to look at everything, from the car parked in her driveway to the snacks on her bedside table. Here’s the breakdown.

Remember 2005’s Herbie: Fully Loaded? It can’t be a coincidence that Lohan has a white Volkswagen Beetle parked outside her house. Unlike Herbie, however, the ad’s Bug is a convertible and is missing the stripes and number 53.

The first look inside Lohan’s house in the ad shows her bedroom, where she’s got a piece of The Parent Trap history hanging above her bed: a lifebuoy with “Queen Elizabeth 2” written on it. That’s the ship where her on-screen parents were married, not once but twice.

The Items On Her Bedside Table

A look a Lohan’s nightstand also throws it back to The Parent Trap. She has a deck of playing cards and a plate of Oreos with peanut butter — both of which were key parts of Annie and Hallie’s Camp Walden experience.

Again, pink is an important color in Mean Girls and in the ad. Lohan first appears in her bathroom, where there are rosy hues aplenty. Items like her hand towel, toothbrush, soap, and cellphone case are all pink, plus her outfit, too.

Talking about the internet’s reaction to her role as Allbirds’ running spokesperson, Lohan shows some (fictional) comments on her phone — and there are familiar names in the mix. The list is inspired by both Mean Girls and The Parent Trap and includes Regina, Aaron, Gretchen, Karen, Janis, and Damian, as well as Meredith and Chessy. Gretchen’s comment, of course, is, “That’s so fetch!”

The camera follows Lohan down her stairs, and lo and behold, there is hidden meaning in her artwork. One piece features the words “Where Dreams Have No End” — the same ones that appear on the label of her Parent Trap mom and dad’s wedding wine. A second piece shows the continent of Africa, where Mean Girls’ Cady Heron spent most of her childhood.

“I didn’t run track in high school. I was more of a mathlete,” Lohan quips as she calls herself an “unexpected” spokesperson for Allbirds. It’s a clear reference to Cady’s stint with her school’s math competition team.

The Day Of The Week

The video dropped on Wednesday, June 29, and in it, Lohan alludes to the Plastics’ day to wear pink in Mean Girls. After she surveys a row of Allbirds Tree Flyers, she picks out the pink ones, saying to the camera, “Well, it is Wednesday.”

Allbirds are made of natural materials, as Lohan explains, and that sets her up to poke fun at the Plastics, the clique at the center of Mean Girls. “Always avoid the plastics,” she advises.

Allbirds are “perfect for a Queen Bee like Lindsay Lohan,” as she says in the ad. Sure, Regina George (Rachel McAdams) is the Queen Bee at North Shore High in Mean Girls, but Lohan gets to enjoy the status in real life.

It was a shock for many fans to learn in 2022 that the actor’s last name is pronounced Lo-wen, not Lo-han, meaning we’ve been saying it wrong for years. The star made light of it all toward the end of the ad, pronouncing her surname correctly before using the incorrect version to add, “Or is it Lohan?”

Like the rest of the Lindsay Lohan nostalgia we’ve gotten so far this year, the ad gets an A+, no Mathletes extra credit needed.

More like this
Amanda Seyfried Says She Felt Pressured To Shoot Nude Scenes At 19 Years Old
By Jake Viswanath
Before 'Bullet Train,' Revisit These Brad Pitt 'Fight Club' Premiere Photos From 1999
By Grace Wehniainen
Jennifer Coolidge Needs 'Legally Blonde 3' To Happen So She Stops Getting Hot Dog Jokes
By Jake Viswanath
Josh Peck Shows Love To Jennette McCurdy After Her Shocking 'iCarly' Revelations
By Radhika Menon
Get Even More From Bustle — Sign Up For The Newsletter