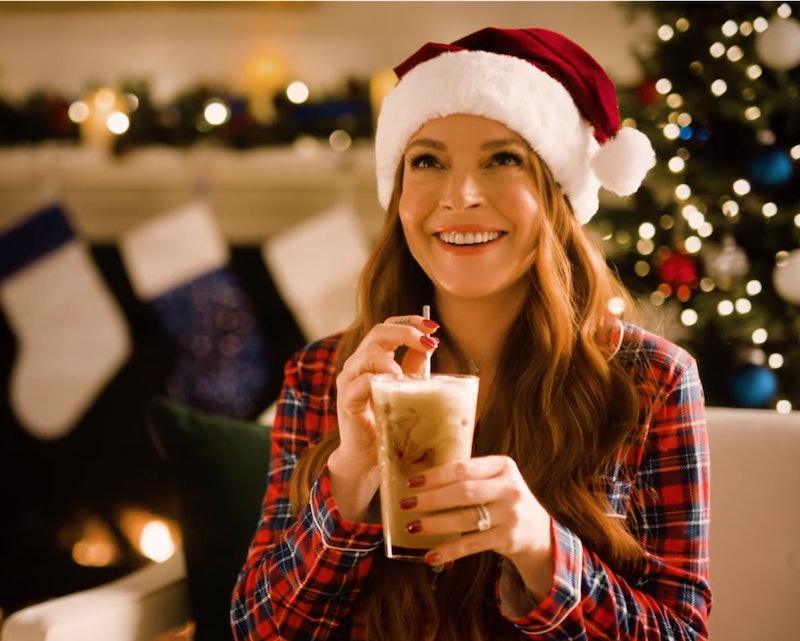 If Mariah Carey is the Queen of Christmas then Lindsay Lohan is surely the princess of the holidays, with her hit festive rom-com Falling For Christmas that many fans have dubbed her return to fame and the limelight. Even though the film received mixed reviews from critics (and viewers), Falling For Christmas was streamed over 30 million times in the first four days alone. And now, continuing to spread the festive cheer, Lohan has shared her new seasonal advert with Pepsi that is equal amounts weird and wonderful.

In one version of the advert, Lohan — dressed in an iteration of her iconic Mean Girls Santa outfit — can be seen pouring herself a can of Pepsi, which she then adds a jug of milk to and gives it a good old mix around. “Pepsi and milk? Pilk,” says Lohan of the drink combination. Another version of the advert sees Santa himself create the drink, leaving it downstairs for Lohan to enjoy. “Mmm, that is one dirty soda, Santa,” the actor says after tasting the beverage.

Lohan shared her new ad campaign on Twitter with the caption, “Feeling nice…or naughty? Pepsi, let’s make #PilkandCookies happen.” And of course, the internet has had a lot to say about the introduction of “Pilk.” The mixing of fizzy drinks, like Pepsi and Coke, is not a particularly new concept and has actually been a TikTok trend for quite some time. Many fans shared their love and pride for the actor, but also their apprehension about mixing a fizzy drink with milk, calling it “weird” and “gross.” However, others were quick to point out that this had already been done by Laverne & Shirley actor Penny Marshall, as Pepsi and milk was a favourite drink of both her character on the show and in real life.

In true holiday spirit, we’ve rounded up some of the best memes and tweets reacting to Lohan’s Pepsi advert that may make you want to give this unique combination a go. See the advert, and the reactions it has sparked, below.

More like this
Watch The Sweet Moment Adele Stopped Her Vegas Concert To Kiss Her Son
By Sophie McEvoy
Blake Lively Is Trolling Ryan Reynolds Again – Over Wrexham FC
By Sam Ramsden
4 Surprising Celeb Throuples That Got The Internet Talking
By Sophie McEvoy
Emily Atack’s Net Worth Would Make Charlotte Hinchcliffe Proud
By El Hunt
Get The Very Best Of Bustle/UK
Sign up for Bustle UK's twice-weekly newsletter, featuring the latest must-watch TV, moving personal stories, and expert advice on the hottest viral buys.