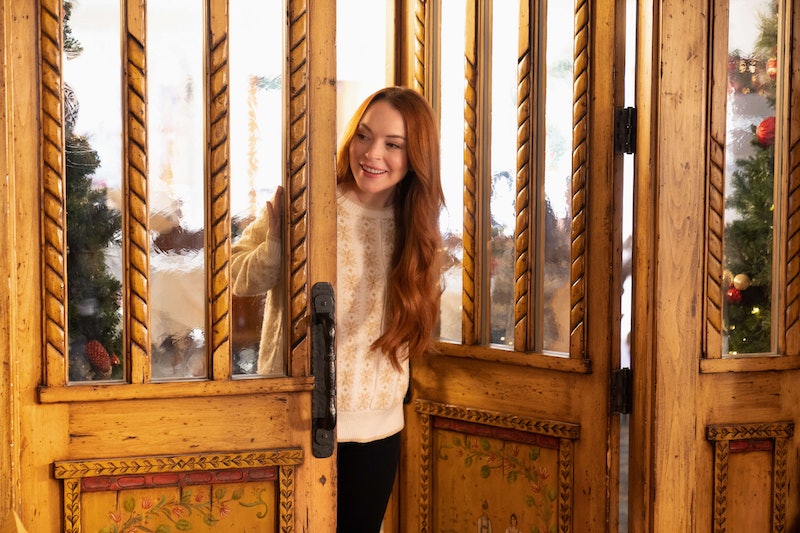 Lindsay Lohan fans, rejoice! After a very long hiatus away from our TV and movie screens, Lindsay Lohan is officially back with a new holiday rom-com on Netflix, dropping Nov. 10. Lohan will star in Falling For Christmas as a newly engaged heiress who suffers a skiing accident and subsequently forgets who she is. When she meets a friendly local (Chord Overstreet) who helps nurse her back to health, she learns to appreciate the little things in life while (ostensibly) falling in love with him.

Arriving over a month before Christmas (which gives us plenty of time to watch it over and over again), the film is part of Netflix’s holiday slate which also includes original films like Christmas With You starring Freddie Prinze Jr., and The Noel Diary with This Is Us star, Justin Hartley.

Netflix’s marketing team made the most of Lohan’s Mean Girls legacy by releasing the trailer on Oct. 3, which has unofficially been dubbed “Mean Girls Day” because of the iconic line between Lohan’s character Cady and her crush Aaron Samuels (Jonathan Bennett). One fan called her announcing her comeback on Mean Girls Day “legendary.”

After the Falling For Christmas trailer dropped days later, people couldn’t help but notice the plot shares a lot of similarities to the 1987 Goldie Hawn and Kurt Russell vehicle Overboard, which was remade with Anna Faris and Eugenio Derbez in 2018. Despite its similarities, fans weren’t turned off and still pledged to stream Falling For Christmas when it comes out in November.

Many others were charmed by the film’s playful nature and the fact that Lohan was gracing our screens once again — some tongue-in-cheek coverage even dubbed it the “greatest piece of entertainment” that will “change cinema as we know it.”

Lohan and Netflix even stashed a little easter egg for close watchers and listeners of the trailer. Fans were delighted to hear Lohan’s rendition of “Jingle Bell Rock” soundtracking the trailer — a nod to Cady and the Plastics’ performance at the talent show in Mean Girls.

No word yet on whether she’ll surprise us with a “Jingle Bell Rock” performance mid-movie, but we’ll take the cast recording in the meantime to help us get into the holiday spirit. Falling For Christmas hits Netflix on Nov. 10.

More like this
Ashton Kutcher Wants Danny Masterson “To Be Found Innocent” In Rape Retrial
By Jake Viswanath
At 28, Debra Jo Rupp Was Living A Much Different '70s Show
By Grace Wehniainen
'Brookside' Is Coming Back & Soap Opera Fans Are Going Wild
By Sam Ramsden
All The ’70s Easter Eggs You Missed In 'That ’90s Show'
By Grace Wehniainen
Get Even More From Bustle — Sign Up For The Newsletter
From hair trends to relationship advice, our daily newsletter has everything you need to sound like a person who’s on TikTok, even if you aren’t.