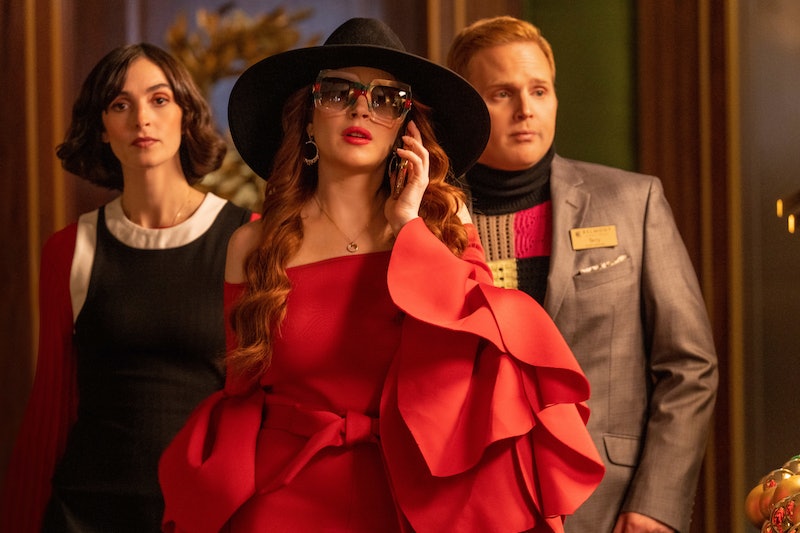 If you’ve watched Lindsay Lohan’s return to the screen in Falling For Christmas and thought you may have spotted her sister Aliana, you’re not alone — or wrong.

The Lohan sisters confirmed that Aliana not only made a cameo in the Netflix holiday film — but also lent her voice to a new song to the film’s soundtrack. Aliana can be seen in one of the first frames of the film as part of Lohan’s character Sierra Belmont’s glam squad. The younger Lohan plays Bianca, a stylist in the crew. “Dress or slacks?” she asks Sierra, who counters with a question about the pants’ material. “Vegan leather,” Bianca clarifies before Sierra requests something else altogether.

Aliana’s song “Without You” also makes its debut within the film, as viewers with closed captioning quickly spotted. Lindsay and Aliana appeared on The Drew Barrymore Show on Nov. 15 and revealed that Aliana had written the song prior to the film. “I wrote that song about a year ago and then it was placed beautifully in the film. I'm very grateful,” she said at the time.

Lindsay herself covered “Jingle Bell Rock” for the film, a nostalgic nod to her iconic Mean Girls performance. But she was nervous about the weight of revisiting the song, which plays over the credits alongside bloopers. “I was [nervous] because I haven't recorded in a long time and felt the pressure of doing it in a way that people who had seen Mean Girls would like it the same,” she told Entertainment Tonight. “With Mean Girls, we had the dance behind it and I had all the other girls with me. This was just my voice. So, it was nerve-racking. But the outcome was incredible. I'm really, really happy.”

This isn’t the first time that the sisters have worked together: Aliana has also made cameos on Lindsay’s films The Parent Trap, Life-Size, and I Know Who Killed Me. In an episode of Lindsay’s podcast The Lohdown the older sister said, “it was so much fun to be able to work together on set.”

More like this
Austin Butler Recalls Lisa Marie Presley Showing Him Elvis’ Bedroom
By Jake Viswanath
You’ll Definitely Recognise Isadóra Bjarkardóttir Barney’s Mum
By Maxine Harrison
Lisa Marie Presley's Secret Granddaughter Was Revealed At Her Funeral Out Of Nowhere
By Jake Viswanath
Here’s Everything Coming To & Leaving Netflix In February
By Jake Viswanath
Get Even More From Bustle — Sign Up For The Newsletter
From hair trends to relationship advice, our daily newsletter has everything you need to sound like a person who’s on TikTok, even if you aren’t.