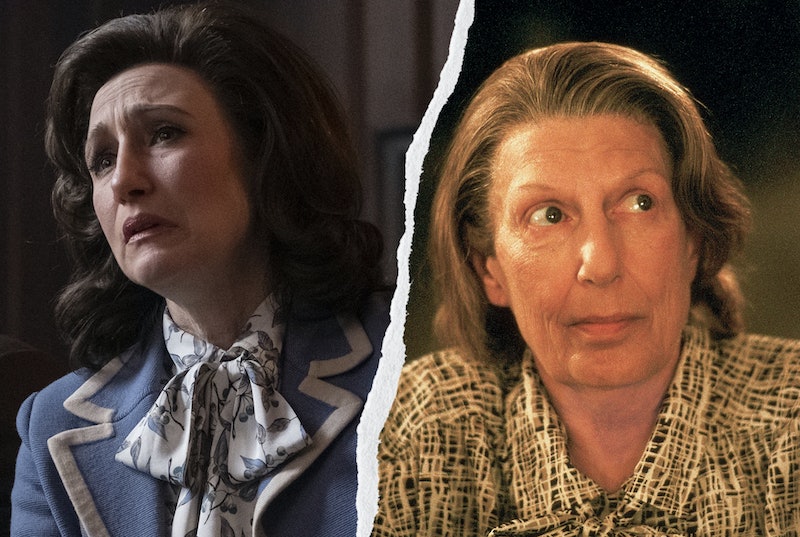 Livia Soprano just might be the most miserable old woman on television. Over the course of The Sopranos, she made verbally assaulting her family into an art form, simultaneously undermining and infuriating everyone she came in contact with. But Livia (Nancy Marchand) was always more than just the ruthless matriarch of the Soprano clan. She’s a murderous narcissist whose brutal method of parenting created the one and only Tony Soprano, famed mob boss and murderer. (Just like his mother, Tony is hardly well-adjusted. Happy people, as Elle Woods might say, don’t kill their families.)

On the show, viewers came to know Livia as a brittle old woman living in a nursing home, a well of resentment for a lifetime of perceived injustices. But in The Many Saints of Newark, we see Tony’s mother in her heyday, if you could call it that. Set in the summer of 1967, the film introduces a younger Livia (Vera Farmiga): a tough-as-nails mafia wife with a killer sense of style. Despite appearing to have it all, it’s clear that she’s unhappy, and that she’s spent her whole life this way.

Old Livia seemed to idolize her dead husband, often uttering the refrain, “he was a saint.” This feels hilarious after seeing just how much she seemed to abhor Johnny Soprano in The Many Saints of Newark. The reality of their relationship seems much closely aligned with Tony’s memory of a strained marriage, during which Livia effectively wore his strong, capable father “down to a nub” with all her negativity. Most of the couple’s interactions take the form of fighting or screaming, usually in public, while an embarrassed Tony looks on in horror.

While The Sopranos’ Livia appears to be completely unfeeling, the Livia in The Many Saints of Newark still has some occasional moments of tenderness for her family.

However, while The Sopranos’ Livia appears to be completely unfeeling, the Livia in The Many Saints of Newark still has some occasional moments of tenderness for her family. We see a brief moment of vulnerability when she meets with her son’s guidance counselor. Tony has gotten in trouble in school again, and at first, she is on her usual bullshit, calling Tony stupid and insisting he is worthless. But then the counselor mentions a favorite memory that Tony shared, about a time when Livia read her son a children’s book and cuddled him up close. Upon hearing this, Livia breaks down in tears.

Livia, though murderous and manipulative, is not a true monster. And though hardened somewhat by middle-age, she was not yet the woman capable of putting out a hit on her own son, as she would do in The Sopranos. Still, she’d already been set on that path. In the series, she constantly reminds her kids that she didn’t have an easy upbringing. Her principles as a mother — that babies are no better than dogs, that kids should never be encouraged, that mental health treatment is only for the weak — leave audiences to wonder what kind of toxic home she grew up in. On top of that, there’s a real possibility that she never hoped to marry into a crime family and spend her days being yelled at, cheated on, and sometimes shot at by her husband. It isn’t an enviable existence, but when she is offered help — such as in the film, when her doctor prescribes an antidepressant for her unstable moods — she flatly refuses it. Instead, Livia digs herself deeper into her hole, and drags her family down with her.

Tony was raised amid the tumult of Livia’s constant mood swings, her rage, her public outbursts, her hatred for herself and everyone else.

Tony was raised amid the tumult of Livia’s constant mood swings, her rage, her public outbursts, her hatred for herself and everyone else. So many of Tony’s worst qualities can be traced back to his mother. It’s devastating to watch him continue the cycle of abuse as an adult in The Sopranos, making the same exact mistakes with his kids.

As Tony got older, though, reaching the height of his power — over both his family and the mafia world at large — Livia waned. It couldn’t have been easy to descend from the wife of a mafia boss to withered nursery home resident, particularly for someone with Livia’s blown up sense of pride. So she did what any deeply unwell, self-loathing mother in The Sopranos would: convince her brother-in-law to murder her own son. Tony responds by trying to smother Livia with a pillow. Like mother, like son.