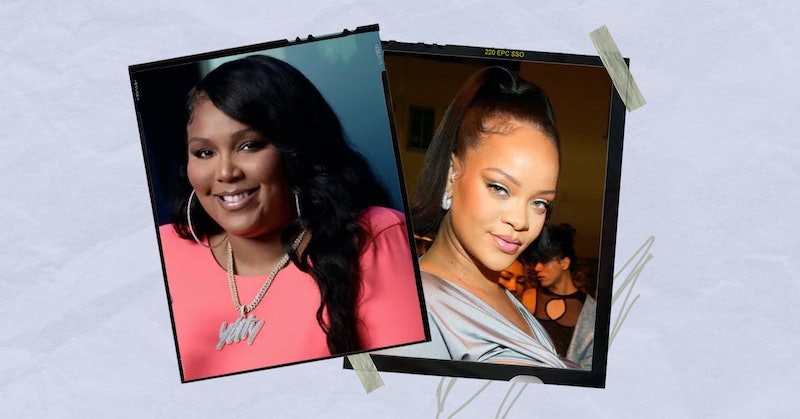 As you can imagine, Lizzo has a lot of people sliding into her DMs, but only one popstar has made her blush. As she revealed on the July 18 episode of Watch What Happens Live with Andy Cohen, Lizzo says that Rihanna sent her the “most salacious DM” she’s ever received. “I think that’s just how she talks,” she remarked.

Lizzo made the confession after a fan asked if she would ever collaborate with Rihanna and inquired when they might hear some new music from the Fenty Beauty founder. “Okay, did the army send you?” she asked, laughing. “She was like, ‘Yeah, I’ll be a lesbian for a day.’” She went on to explain that when she chats with Riri, things get a little steamy, but in a more humorous way. “Speaking of lesbians, my conversations with Rihanna are more sexual, I guess,” she revealed, which caught Cohen’s attention. “Oh, really?” he asked. “We don’t talk about sex a lot, but we’re just always giving it to each other,” she responded.

However, their flirty conversations have slowed down since Rihanna welcomed her first child with boyfriend A$AP Rocky in May. “We don’t talk about work, it’s all play with me, but not since she’s been, you know, mommy,” she explained, affectionately calling her the nickname “Mommihanna.” “So congratulations to her and A$AP Rocky,” she said.

The “Work” singer has always been an ardent supporter of Lizzo, telling Entertainment Tonight in 2019 that she’d love to collaborate with her in any form. “Gosh I love Lizzo,” she said. “I would collaborate with her on the lights for this interview right now, like Lizzo is so badass.” She asked the “About Damn Time” singer to walk in her Savage x Fenty fashion show in 2020, and they’ve stayed friends since then.

“The thing about Rihanna is if she f*cks with you, she f*cks with you,” Lizzo told Variety in March 2022. “By the grace of the goddamn stars, she f*cks with me.” She was also just as excited as all of us when Rihanna announced her pregnancy in February. “I’m so happy for her being pregnant,” she said. “I’m like, ‘Sh*t. I’m about to get pregnant.’”

Rihanna also has the distinction of being one of the few people that Lizzo actually flirts with in her DMs, explaining that other stars have tried to slide into her DMs, but they don’t stay for long. “It’s a lot, but I don’t let them get too far,” she told Cohen. “You know, they’ll always be like, ‘Man, you playin’.’ ‘Hey, what’s up, Lizzo?’ I always see that, and I see their name. I’ll be like, ‘Not today.’” Considering her relationship with boyfriend Myke Wright, it’s not a surprise that she’s shutting down anyone who’s not Rihanna.